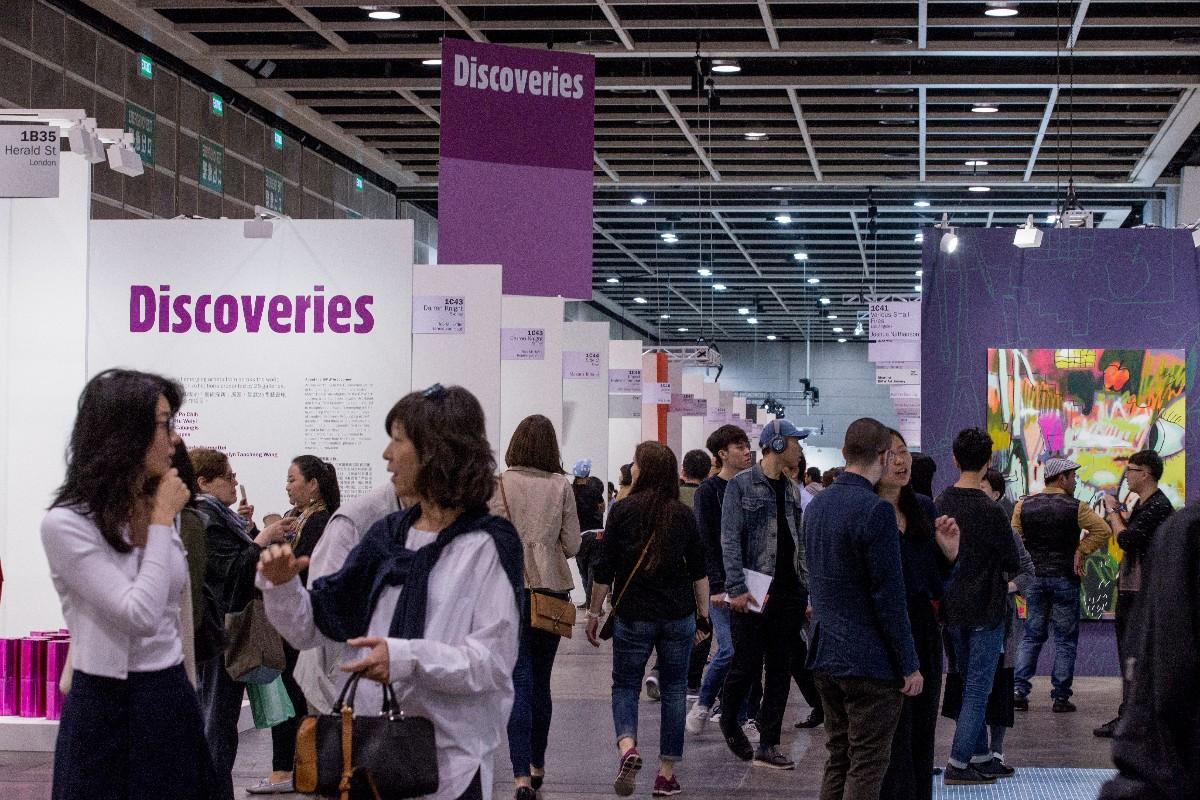 Bringing together 12 artists from 11 countries and territories including Australia, Austria, Chile, Cuba, Germany, India, Japan, the Philippines, Sri Lanka, Taiwan, and the United Kingdom, Alexie Glass-Kantor’s focus for this year’s curation centers around inviting the audience to make contact with objects, artists and ideas. While some artworks will require the viewer’s participation to activate the work, others will reflect or mirror the body of the audience, directly implicating them into each work.

‘7 Curtains’ (2017), a new site-specific work by Ulla von Brandenburg (b. 1974) will be presented jointly by Pilar Corrias and Meyer Riegger. Interested in theatre and absurdity, von Brandenburg's installation consists of a sequence of seven monumental stage curtains, inviting the audience to perform by stepping into the color field.

Erwin Wurm's (b. 1954) iconic series ‘One Minute Sculptures’ (2000-2018) will be jointly showcased by Lehmann Maupin, Galerie Thaddaeus Ropac and König Galerie. First performed in 1997, the ongoing series instructs the audience to "make one minute sculptures", questioning and reflecting on sculpture itself and limiting the sculptures' lifetime to 60 seconds.

neugerriemschneider will present ‘Untitled’ (2009, 2017) by Cuban artist Jorge Pardo (b. 1963). Inspired by medieval manuscripts, Pardo has choreographed a series of objects that intersect architecture, sculpture and design, challenging our expectations of these categories.

‘Start. Stop’ (2008) by Subodh Gupta (b. 1964), who has received international attention for his large-scale monuments exploring subjects of Indian life and culture, will be presented by Arario Gallery. The installation consists of a large and slowly moving sushi belt with scores of tiffin boxes and gleaming pots, recalling the fate of the "dabbawallas" who transport tiffin boxes filled with home-cooked lunch on wheelbarrows in a rapidly changing urban environment.

Lisson Gallery will showcase ‘Potent motif of ambition (Dramaturgical framework for structure and stability)’ (2018) by British artist Ryan Gander (b. 1976), which considers technology and mechanics to rethink the body through new anthropomorphic forms.

‘Left Wing Project (Belok Kiri Jalan Terus)’ (2017-2018), a new large-scale, site-specific installation by the artist duo Isabel and Alfredo Aquilizan (b. 1965, b. 1962 respectively) will be presented by Yavuz Gallery. Also activated by air, Isabel and Alfredo Aquilizan’s installation is concerned with the mass migration of people and the complex social and political realities of contemporary agrarian societies in Asia.

‘Gäna (self)’ (2018) by Nyapanyapa Yunupingu (b. 1945), one of Australia's most celebrated Aboriginal artists, will be presented by Roslyn Oxley9 Gallery. This sculptural installation comprises powerful and totemic bark paintings and larrakitj poles, which were traditionally used as hollow coffins created to hold the bones of the dead.

Presented by SCAI The Bathhouse, Mona-ha artist Toshikatsu Endo (b. 1950) will display ‘Void – Wooden Boat, Hong Kong’ (2009-2018), an 11-meter-long boat carved out of a single timber soaked in tar. Born to a family of shrine architects, Endo is interested in ritual involving the classical elements fire, water, earth and air.

Paul Kasmin Gallery will debut New York-based Chilean artist Iván Navarro's (b. 1972) ‘Compression’ (2018). The new work transforms the globe of the Earth’s surface into a cube, essentially rendering its surfaces flat, challenging the notion that the globalisation offers a level playing field and that all things are equal.

The Encounters sector is supported by MGM Resorts Art & Culture.