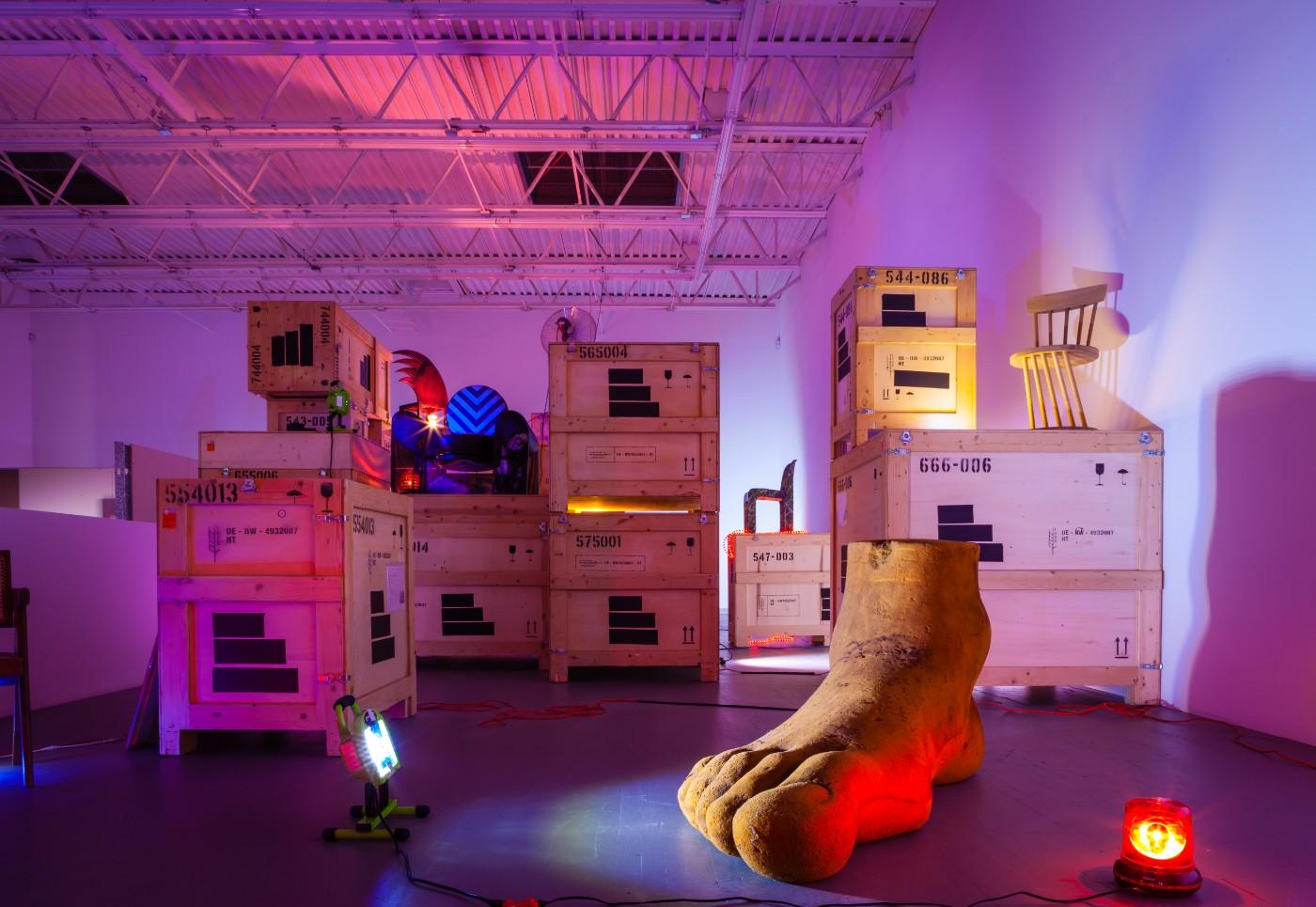 The Armory Show announced today the participating artists and galleries in Platform, a curated section of the fair, which stages large-scale artworks and installations across Piers 92 & 94. The 2019 edition of Platform, entitled Worlds of Tomorrow, is curated by Sally Tallant, the recently appointed Executive Director of the Queens Museum, and former Director of Liverpool Biennial. Worlds of Tomorrow features works by Andreas Angelidakis, Siah Armajani, Tania Candiani, Ryan Gander, Iris Häussler, Xaviera Simmons, Jessica Stockholder, Super Taus, and Pascale Marthine Tayou, who will present a monumental new work in the Town Square on Pier 94.

Worlds of Tomorrow which takes the 1939 New York World’s Fair as a point of departure, features nine site-responsive projects, seven of which have been made specifically for the fair. On the brink of World War II, the New York World’s Fair looked to a hopeful future in the face of rising geopolitical uncertainty. Similarly, the artists featured in this year’s Platform offer hope, respite, and resilience in the face of our present realities in the forms of performance, collective activism, and collaboration. 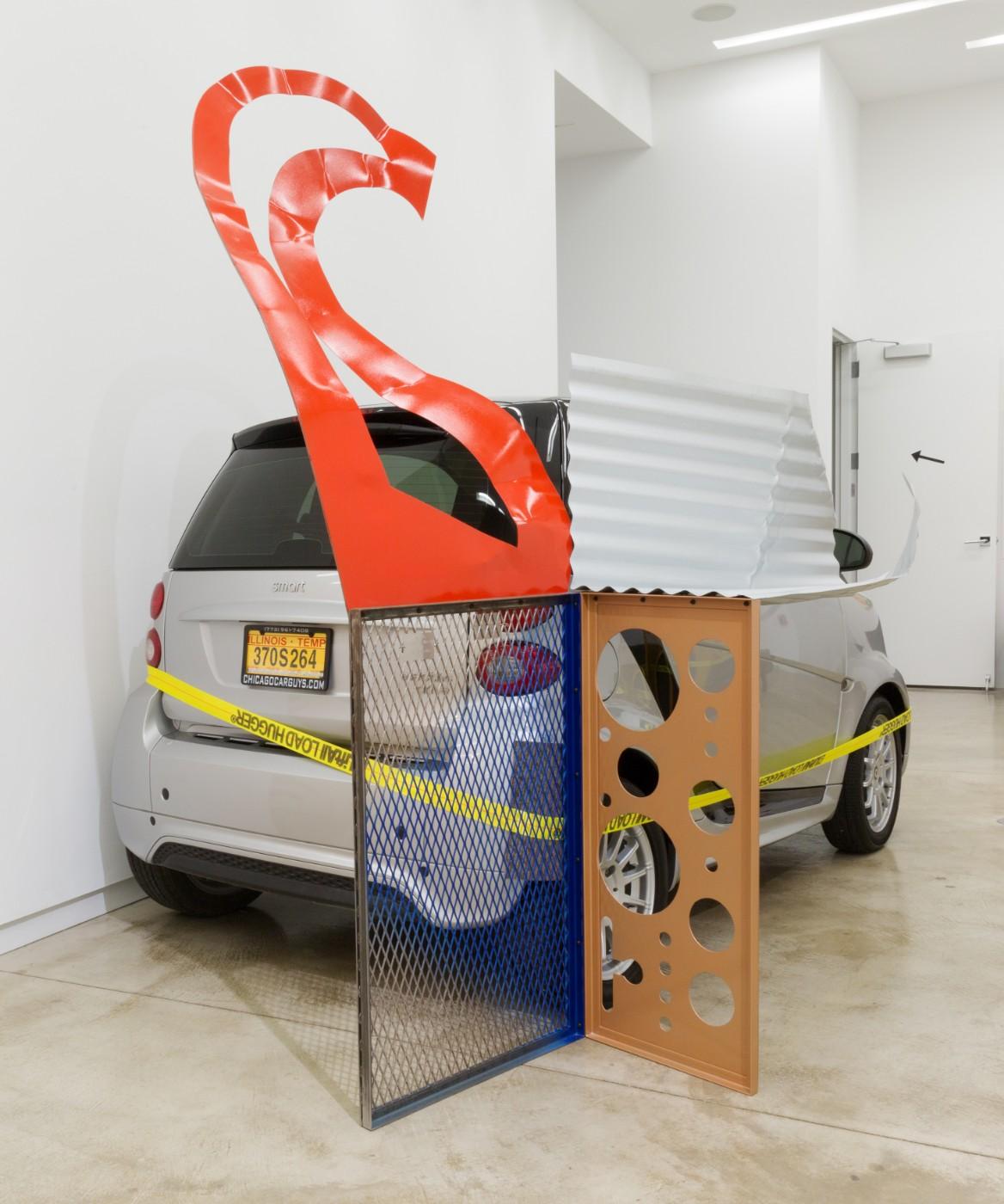 “Today, we are living in dark times: borders are closing; there is a growing refugee crisis; identity, internationalism and citizenship are in turmoil,” remarks Sally Tallant. “Environmental challenges and the oppression of minorities in a society of pervasive gender inequality define this moment. We cannot let these uncertainties paralyze us, we must find a way to gain perspective and develop ways of seeing that allow us to build new hope. It is through art that we express our hopes and fears, and articulate alternatives and new possible worlds. Artists often speak out for the rights of people on the margins of society and now that we are facing a shift in how those people and margins are defined, we need artists to continue to be brave.”

Xaviera Simmons deploys photographic and sculptural works to explore the systems that have rendered invisible major aspects of the American narrative. Both Tania Candiani and Super Taus use objects and performance to offer critiques of cultural stereotypes and to explore personal and national identity. Ryan Gander employs comic reinvention to re-visualize a modernist sculpture; Andreas Angelidakis challenges the market through the redistribution of school supplies in a ‘donation drive’, and Siah Armajani responds thoughtfully to the current migrant crises with radical hospitality in the form of seven rooms. Environmental issues of ecology and waste are brought into sharp focus by Pascale Martine Tayou through a spectacular work comprised of multi-colored plastic bags. Iris Häussler re-presents a body of work that blurs the line between fact and fiction, challenging historical reinvention, while Jessica Stockholder combines symbiotic objects that require support from, and are dependent on other objects, to demonstrate the need for collaboration and collective action.

Presentation details:
Daniel Faria Gallery (Toronto) will present Iris Häussler’s Apartment 5 (2019) a studio reconstruction representing the late body of work of French immigrant Florence Hasard. In 1942, Hasard moved from Wisconsin to New York. Her legacy reveals the life of a reclusive artist living in exile and isolation, the mind of a woman traumatized and obsessed with her experiences during World War I. Location: Town Square, Pier 92. 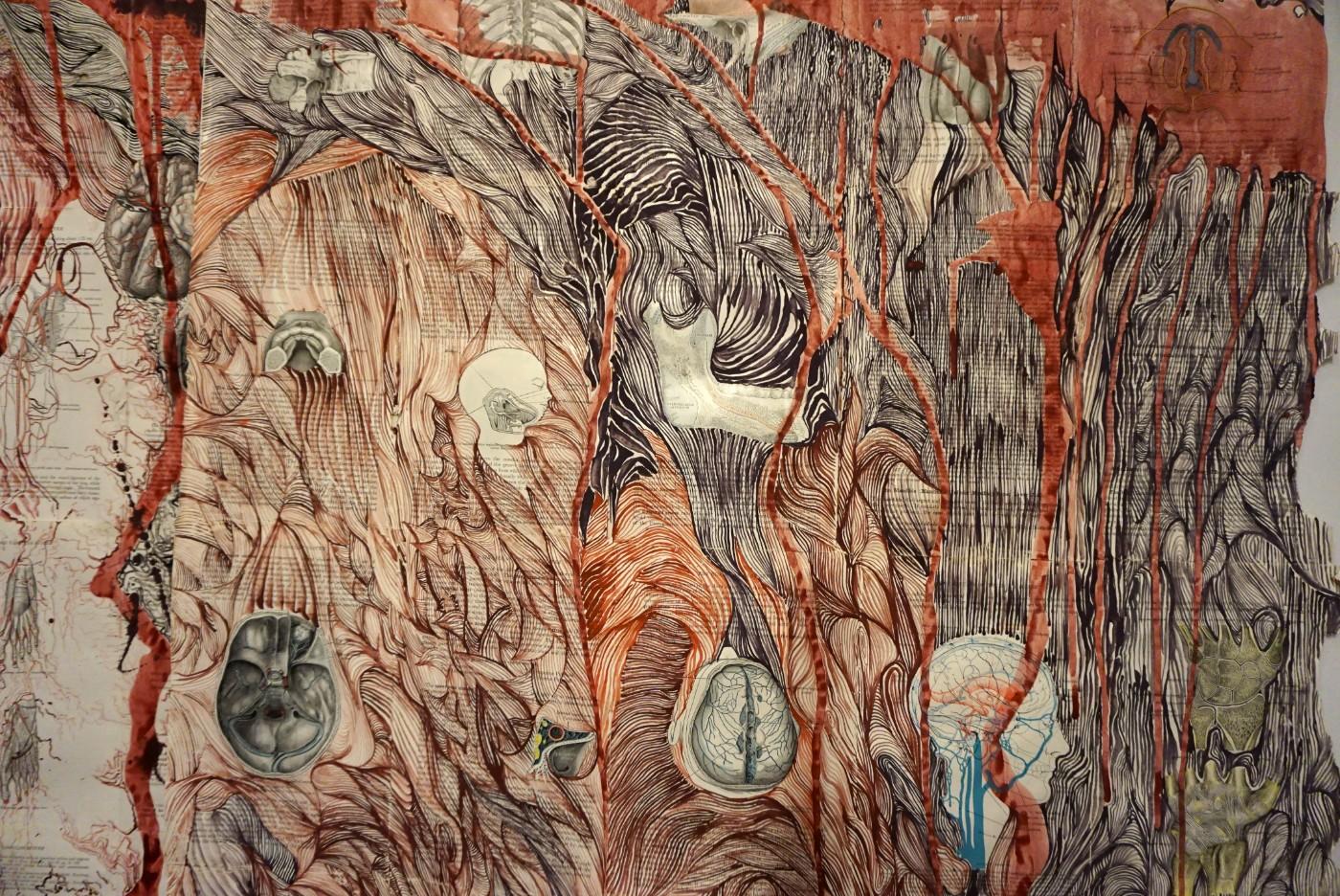 A wallpaper section in Apartment 5, Florence Hasard’s late studio in the 1940s.

In an installation consisting of two "Penachos" or Crowns, Tania Candiani uses bamboo, reed, cloth, paper and feathers to create Reverencia (2019) based on the headdress used in the Dance of Los Quetzales. Presented by Galeria Vermelho (Sao Paulo), Reverencia features video, drawing on paper, and live activations. The piece proposes a reinterpretation of the symbolic meaning of the movements of the Dance, based on reverences of gratitude and petition, and draws a historical connection with the National representations during the World’s Fairs of the 19th century. Location: East End, Pier 94.

Through photographic and sculptural works, Xaviera Simmons’ Chord (2018-2019), presented by David Castillo Gallery (Miami), explores the legacies and the ways in which systemic policies and prejudices have rendered major aspects of the American narrative virtually invisible, the effects of which reverberate into the present day. Location: West End, Pier 94.

Jessica Stockholder’s three works presented by Kavi Gupta (Chicago) share a reliance on objects taken from other contexts and used as “raw” material in the crafting of sculpture. “Dream Whip” (2019) is comprised of: Catapult Anime Stack, made from layering old furniture fragments, an MDF box, and topped with an array of objects plucked from a vast stream of “products” and myriad chemical formulations; Assist #1: A Cyst and Assist #2 create combustion where their metal hardware hits the prop. The Assists can also be used as a ‘base’ to display another artwork, prompting the question: how is autonomy enabled? Location: Central Lounge, Pier 92. 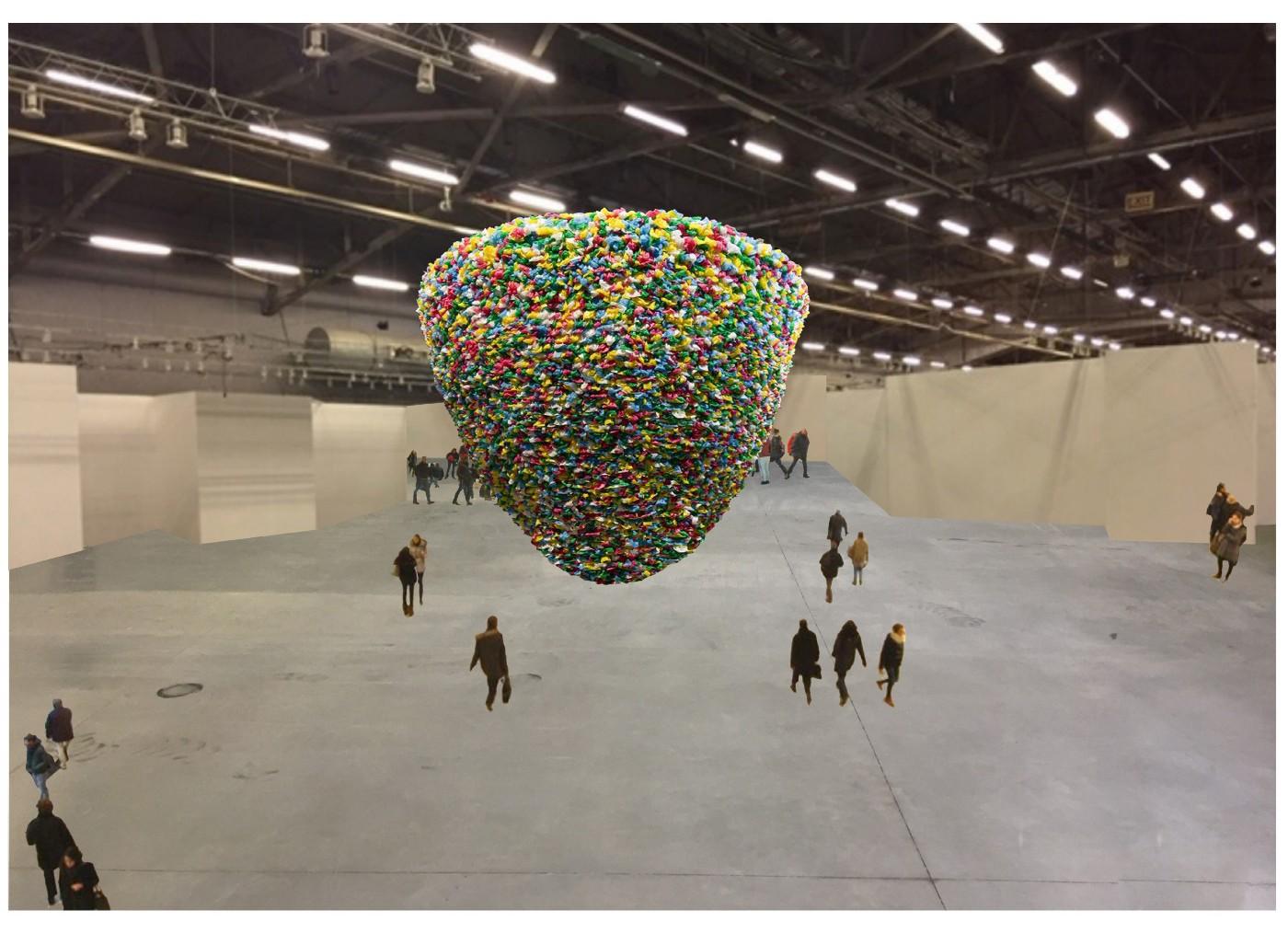 Donation Drive (2019) by Andreas Angelidakis and presented by The Breeder (Athens) is a performative, value-exchange protocol benefiting public schools in need. Equipment and tools requested by teachers from charities dedicated to the provision of school supplies are assembled into a sculptural installation and tagged with art certificates. Potential collectors at the fair are encouraged to buy parts of the installation as a donation. As a result, the schools receive funds to buy the equipment they need, while the visitors to the fair can enjoy purchasing part of an installation for the price of an educational object. If a collector decides not to keep the actual artwork, it will be donated to the schools. Location: Central Lounge, Pier 92.

If you’ve ever dreamt of winning something but never quite made it, Super Taus can actualize the recognition of your achievements. In Quick Fix (2019), she’ll engrave one of the hundred trophies she found via Amazon and AliExpress with the achievement(s) of your choice, presented by narrative projects (London). Location: West End, Pier 92.