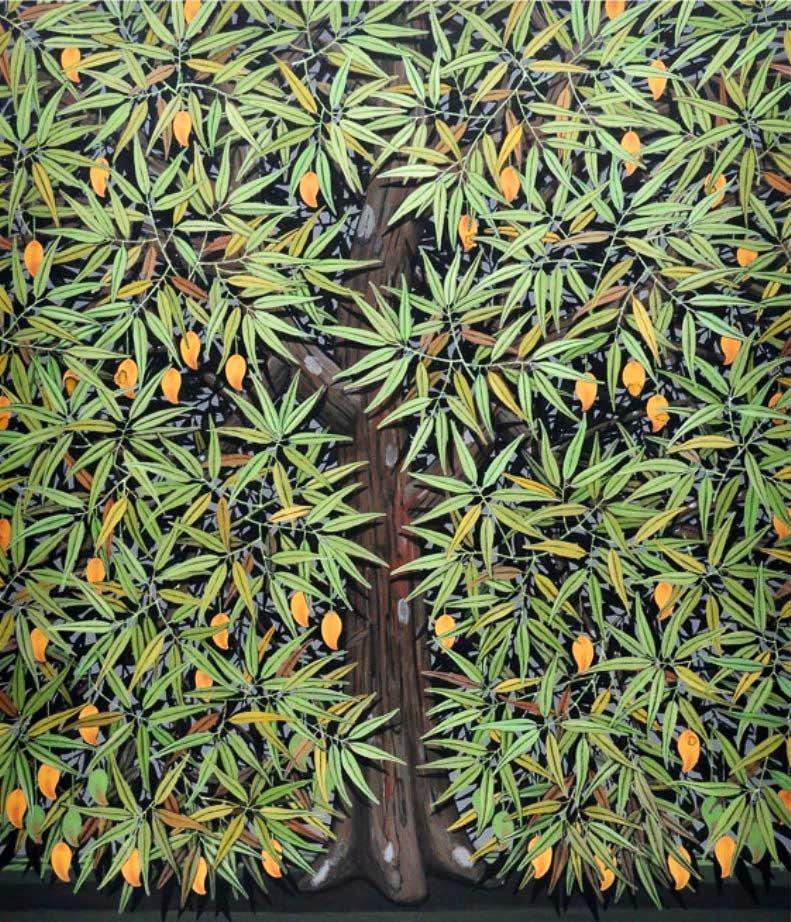 Aicon Gallery New York is proud to present an important Retrospective of work by the late Kerala-based artist Rajan Krishnan. A dear friend of the gallery and a frequent collaborator over the years, Rajan’s unexpected passing in 2016, left a void in the contemporary art world of Kochi - which he in large part helped to create - as well as in the broader landscape of South Asian art. Fortunately, for both those who knew him and those who admired his spirit and work, the palpable absence of the artist himself wanes slightly amidst the remarkable body of work he has left behind and his legacy as a pioneer of the uniquely collaborative and welcoming community of artists he nurtured within Kochi and further afield. The current exhibition represents a coming together of important work from Rajan’s recent retrospective, organised jointly by the Kerala Lalithakala Akademi and Gallery Beyond, Mumbai, and some of the major works he had created for projects with Aicon over the years.

Rajan Krishnan’s art has almost always centered around the natural environments in which he’s found himself. Whether these be the idyllic landscapes of his childhood memories, before rampant urbanization began its sprawl outwards from the city centers of India, or more current scenes of environmental degradation and urban decay, the balance (or imbalance) between humanity and its habitats has remained the primary focus of his work. In this sense, Rajan approached his subject matter almost in the vein of a naturalist, yet one seeking not simply to catalog the rich variance of plant and animal life of his native Kerala, but to simultaneously document its degradation in the wake of humanity’s industrialization and neglect.

In canvases ranging from the intimate to the monumental, he is able to present us with magnificently lush and detailed scenes of abundantly fruiting plants, and wonderfully stoic portraits and groupings of birds and wildlife, yet almost always staged against a foreboding grey backdrop the color of wet concrete or a thick industrial fog. The images appear as if in a dream, both preternaturally beautiful yet besieged by our ever encroaching man-made urban and industrial world and all of its environmental consequences. No mere painter of the natural world as he found it, Rajan’s works, in the words of his wife, writer and journalist Renu Ramanath, “are signifiers of memory that connect/re-connect with history, especially the history of a landscape and a society in transition. They are painted documents of change.”

Rajan Krishnan was born in 1967, in the Thrissur district of Kerala. Having completed a Bachelor’s degree in Economics, Krishnan decided to pursue his true love and signed up for a B.F.A (Painting) at the College of Fine Arts, Thiruvananthapuram. He then went on to pursue a Master’s degree at the Faculty of Fine Arts, M.S. University, Baroda. His international exhibitions include The Empire Strikes Back: Indian Art Today, at Saatchi Gallery, London, The Silk Road, New Chinese, Indian and Middle Eastern Art, from the Saatchi Gallery London, at Lille3000, France, India: Maximum City, at Galerie Helene Lamarque, Paris, Ancestry, at Aicon Gallery, New York and many group shows and art fairs in India and abroad.