Explore Monet’s Engagement with Étretat at The Seattle Art Museum 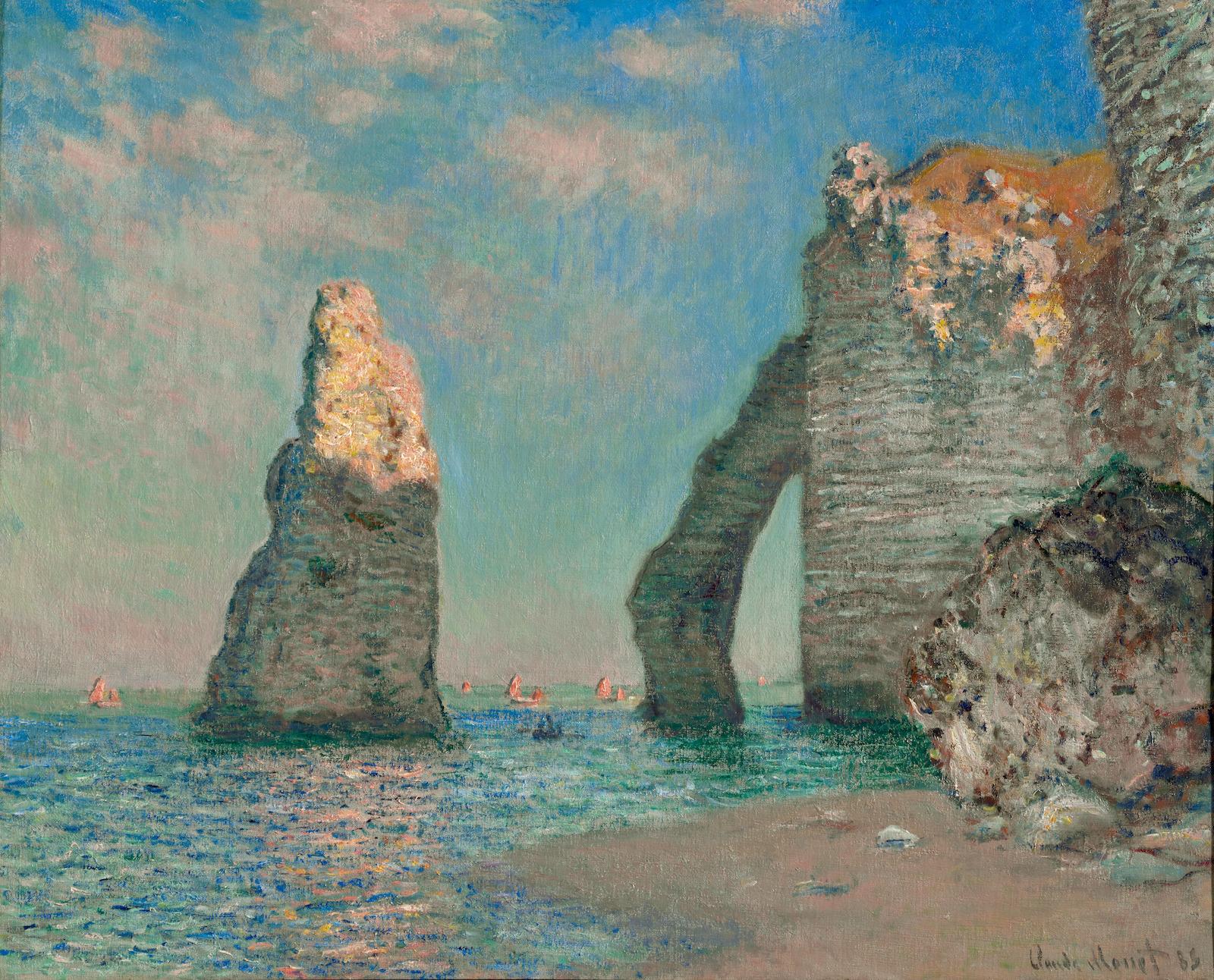 SEATTLE, WA – The Seattle Art Museum presents Monet at Étretat (July 1–October 17, 2021), exploring the artist’s engagement with Étretat, a seaside village in Normandy, France. The exhibition takes Fishing Boats at Étretat (1885), the only work by Claude Monet in SAM’s collection, as inspiration, presenting it alongside ten other paintings by Monet from his visits to the village as well as five paintings by his contemporaries. Monet at Étretat offers a nuanced look at a famed artist, highlighting his artistic and personal struggles in the 1880s as he strove to create a new vision in his paintings.

Organized by SAM, the exhibition is curated by Chiyo Ishikawa, SAM’s former Susan Brotman Deputy Director for Art and Curator of European Painting and Sculpture, who retired in 2019 after a thirty-year career at the museum. “This exhibition reintroduces audiences to Claude Monet as a struggling artist,” says Ishikawa. “When he heads to Étretat, he is in his mid-forties, widowed, and under financial and personal strains; yet he is utterly committed to his vision of a deeper relationship with nature. In these works, we see an artist pursuing what would become his legacy and make him a beloved artist to this day.”

The exhibition introduces Étretat as a geographical wonder and a site of artistic pilgrimage. Dominated by dramatic limestone cliff formations, the village was a popular summer destination in the mid-19th century. The exhibition includes a map outlining its four major cliffs and formations that artists and tourists alike marveled at: the Porte d’Amont, the Porte d’Aval, the Manneporte, and the Needle. Well before Claude Monet (1840–1926) first traveled there to work in 1883, painters, photographers, and writers had created a recognizable iconography of the village. His stated goal was to “try to do it differently.” 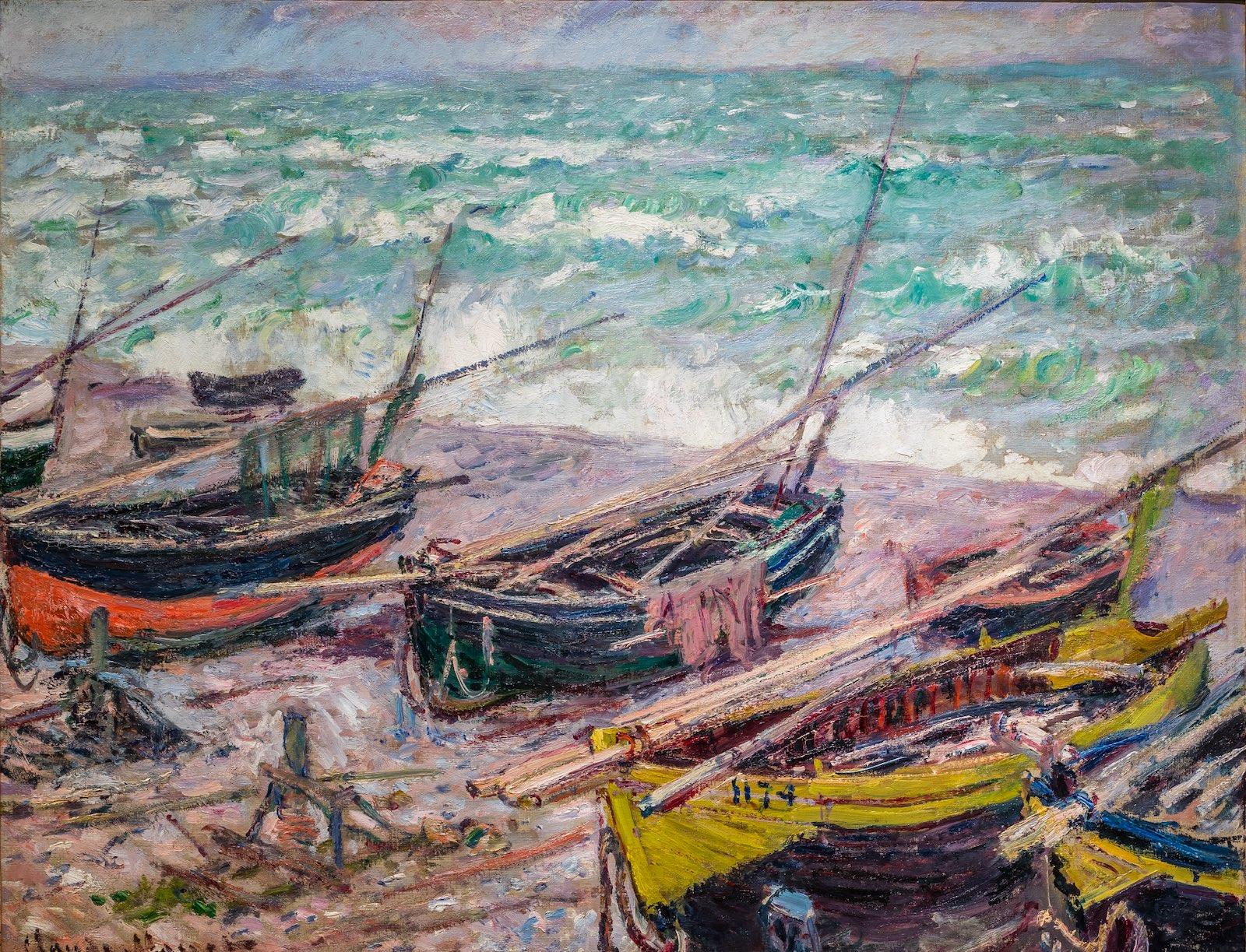 The village was sixteen miles northeast of Monet’s hometown of Le Havre, and he had many happy memories of the Normandy coast with his wife and two sons before the tragic death of his wife Camille in 1879 at the age of thirty-two. As he headed to Étretat in the off-season of 1883 in search of novel scenes, he was in a difficult place. He was under pressure from his dealer to produce marketable paintings, and the physical demands of painting outdoors in changeable weather were exhausting. He was also struggling over his unresolved relationship with Alice Hoschedé, the wife of his patron and surrogate mother to his children.

Along with two paintings by Monet from this first sojourn, the first gallery features three paintings by Eugène Boudin (1824–1898), Monet’s first teacher, as well as one painting each by Jean-Baptiste-Camille Corot (1796–1875) and Gustave Courbet (1819-1877). They highlight the different approaches his contemporaries took to the site, capturing alternately the grandeur or picturesque elements of the village, rather than Monet’s goal of capturing the passage of time itself. Also on view are six albumen silver print photographs from the time period, as well as a charcoal drawing of Monet by his friend, the American artist Theodore Robinson (1852-1896).

The second gallery focuses on the physical aspects of plein air painting, with insights from Nicholas Dorman, SAM’s Jane Lang Davis Chief Conservator. Monet, his predecessors, and his peers used a range of new pigments and commercial innovations to transform painting in the second half of the nineteenth century; visitors can explore their practices through paintings, implements, and technical details about Monet’s Fishing Boats at Étretat, as well two other works from SAM’s collection, Charles Francois Daubigny’s The Banks of the Oise River (nineteenth c.) and Berthe Morisot’s Lucie Léon at the Piano (1892). The latter two works will be on view in a case to reveal details on the paintings’ backs.

This gallery also includes two large-scale monitors with images by the German photographer Christoph Irrgang (b. 1961) superimposed over paintings by Monet, showing how Monet followed nature as he painted. Also on view is a video from the Art Institute of Chicago exploring Monet’s changes during the painting process of their collection work, The Beach at Sainte-Adresse (1867).

The final gallery is devoted to eight paintings by Monet, all done during his second visit to the village in 1885. They show the varied styles he used to portray two primary subjects—fishing boats and cliffs—in changing conditions of weather, light, and viewpoint, anticipating his future breakthrough with serial paintings that would at last bring him critical and financial success. This novel approach to places is best described by the artist’s own words in 1891: “For me, a landscape does not exist in its own right, since its appearances changes at every moment, but its surroundings bring it to life—the air and the light, which vary continually…For me, it is only the surrounding atmosphere which gives objects their real value.”

Also on view in this final gallery are tourist postcards of Étretat from various time periods, as well as a copy of Portraits of Places, an 1884 collection of Henry James’s travel sketches for the New York Tribune, including dispatches from Étretat, on loan from the University of Washington Libraries’ special collections.