The Dark Fairytales of Kiki Smith 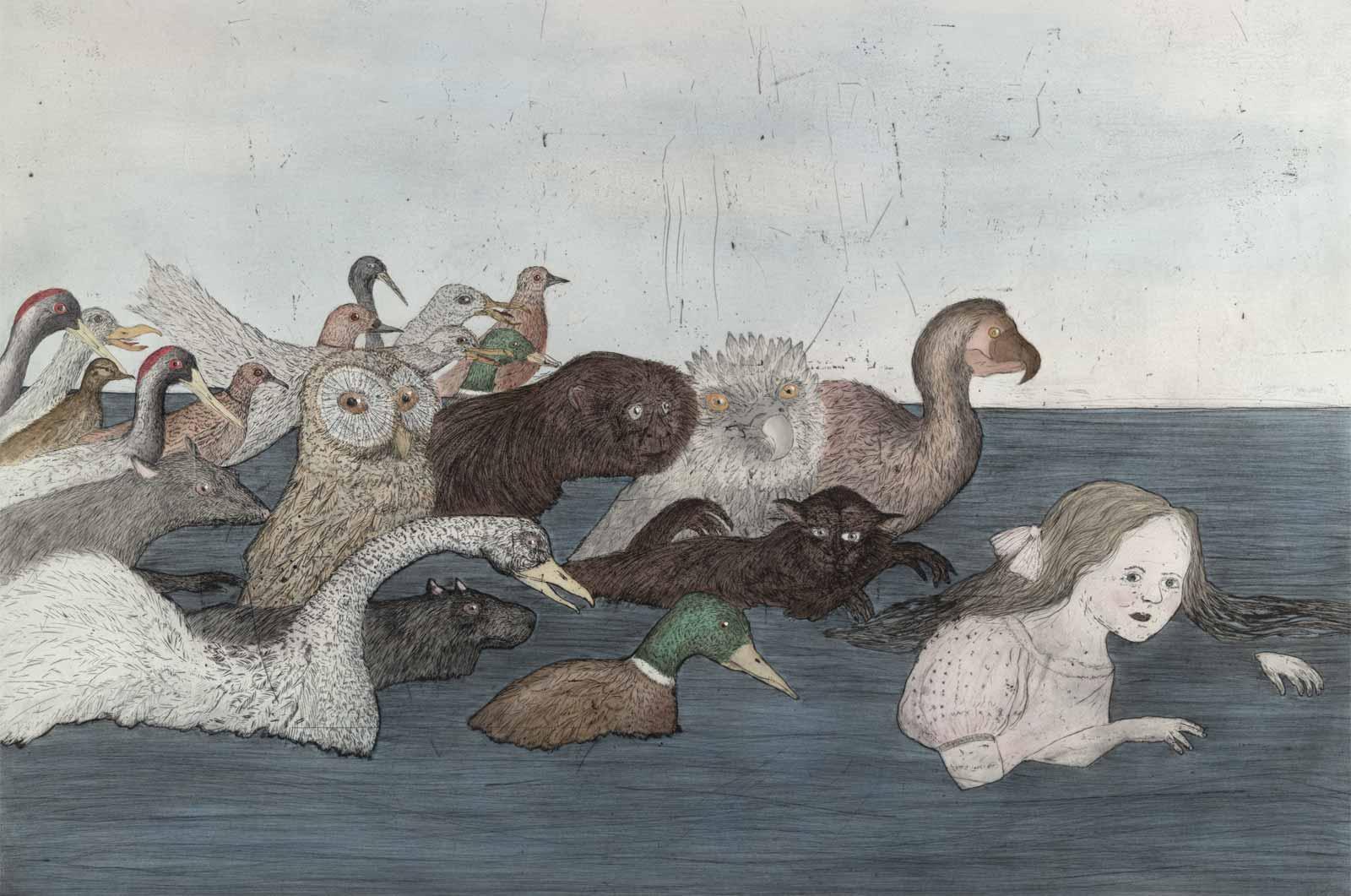 You might not see it on your first go-around, but between the eye-catching tapestries, ethereal prints, and luminous sculptures of Kiki Smith’s exhibition I am a Wanderer at Modern Art Oxford (MAO), there’s a small figurine that encapsulates much of what Smith’s art is about. Io (Seated) (2005) looks like lead; only the whites of the figure’s eyes show that the piece is porcelain. But material isn’t the only shapeshifter here. According to Greek mythology, Io was Zeus’s mortal lover until jealous Hera turned the young princess into a cow. Io escaped her fate by swimming the Turkish Bosporus strait (meaning Ox-ford) to Egypt, where she became a woman again. Smith is fascinated by stories like these, where powers and punishments involve human, animal, and celestial transformations. Her work with fairy tales, myths, and allegories examines human nature’s potential for light and dark, and invites us to invent our own imaginative wanderings. 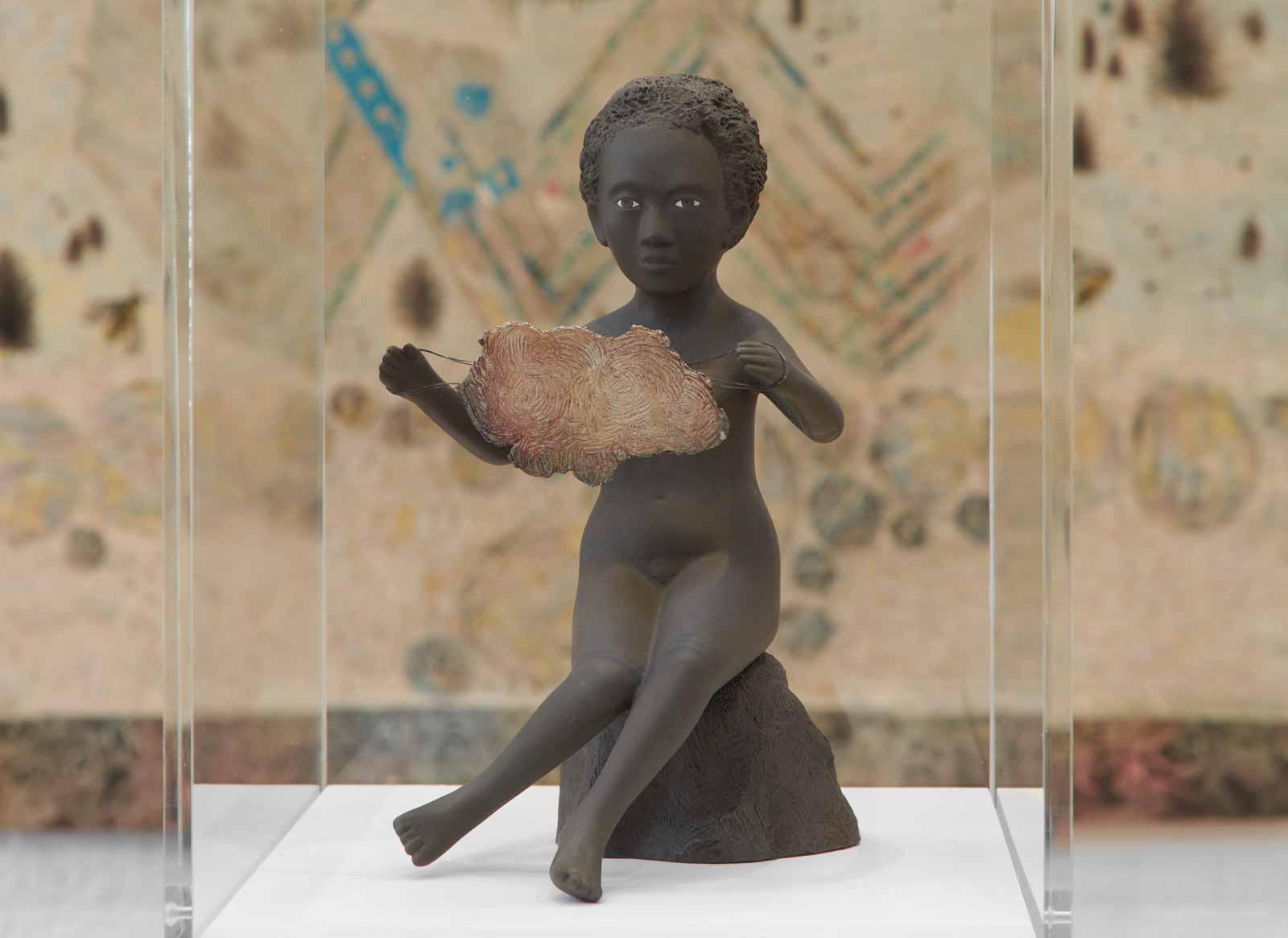 Wanderer is Smith’s first institutional solo exhibition in the UK in 20 years. With its medieval heritage and legacy of fantastical storytellers like C.S. Lewis, J.R.R. Tolkien, and Lewis Carroll, the city of Oxford is a fitting backdrop for Smith’s history-jumping, mystical cosmology. Described as ‘virtually self-taught,’ the artist was nonetheless raised in the rich artistic and intellectual world of her parents, the opera singer Jane Lawrence and the architect and artist Tony Smith.

In 1976, she moved from New Jersey to New York City’s Lower East Side, where her work was shaped by the AIDS crisis and feminist activism. After the social and political upheavals of the 70s and 80s, Smith began incorporating legends, religion, and history into her work. Wanderer encompasses works from this phase onwards.

For Smith, printmaking represents a collective, universal experience. “Prints mimic what we are as humans,” she says. “We are all the same and yet everyone is different.” Since Smith began printmaking around 1980, she has partnered with master printers and workshops to explore a variety of scales and techniques. Some prints recall anatomical or botanical studies, while others arise from personal or literary sources.

Smith’s body-sized, hand-painted Pool of Tears II (2000) is inspired by Carroll’s drawings from Alice’s Adventures Under Ground (1886). Like many of Smith’s works, the message is as magical as it is menacing: although the print’s creatures pursue Alice with their scratchy claws and pointy beaks, their glowing eyes stare only at the viewer, as if we too are part of the chase. 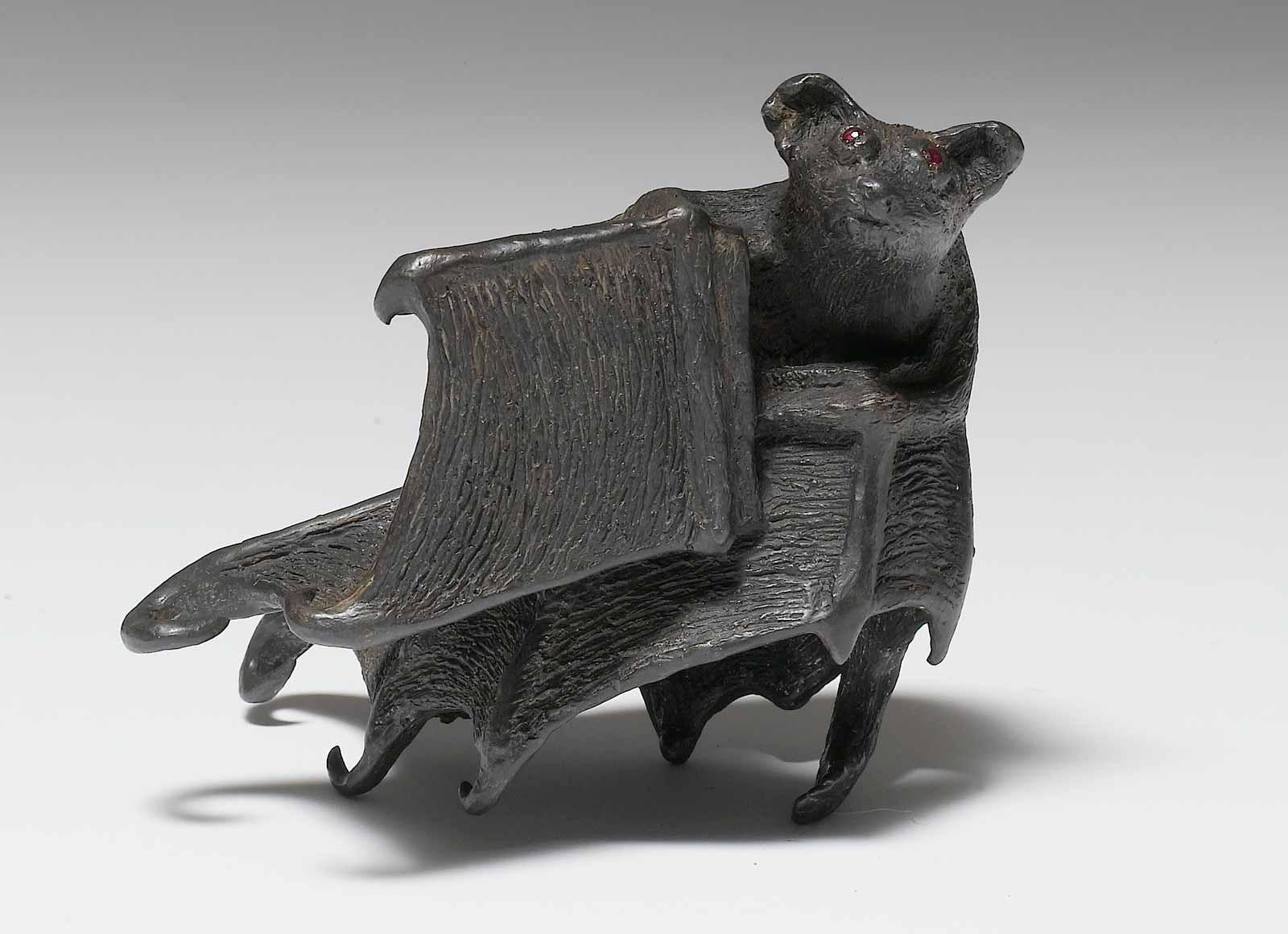 In the next room, a case of Smith’s small sculptures forms a bestiary of real and hybrid creatures made of glass, gold, plastic, porcelain, bronze, lead, silver, plaster, and paper-mâché. The pieces are produced in collaboration with skilled craftspeople, recalling the medieval model of the artisan guild. The intimate, corporeal sculptures are small enough to hold in one’s hand, and their variety of textures makes one wish they could do so. 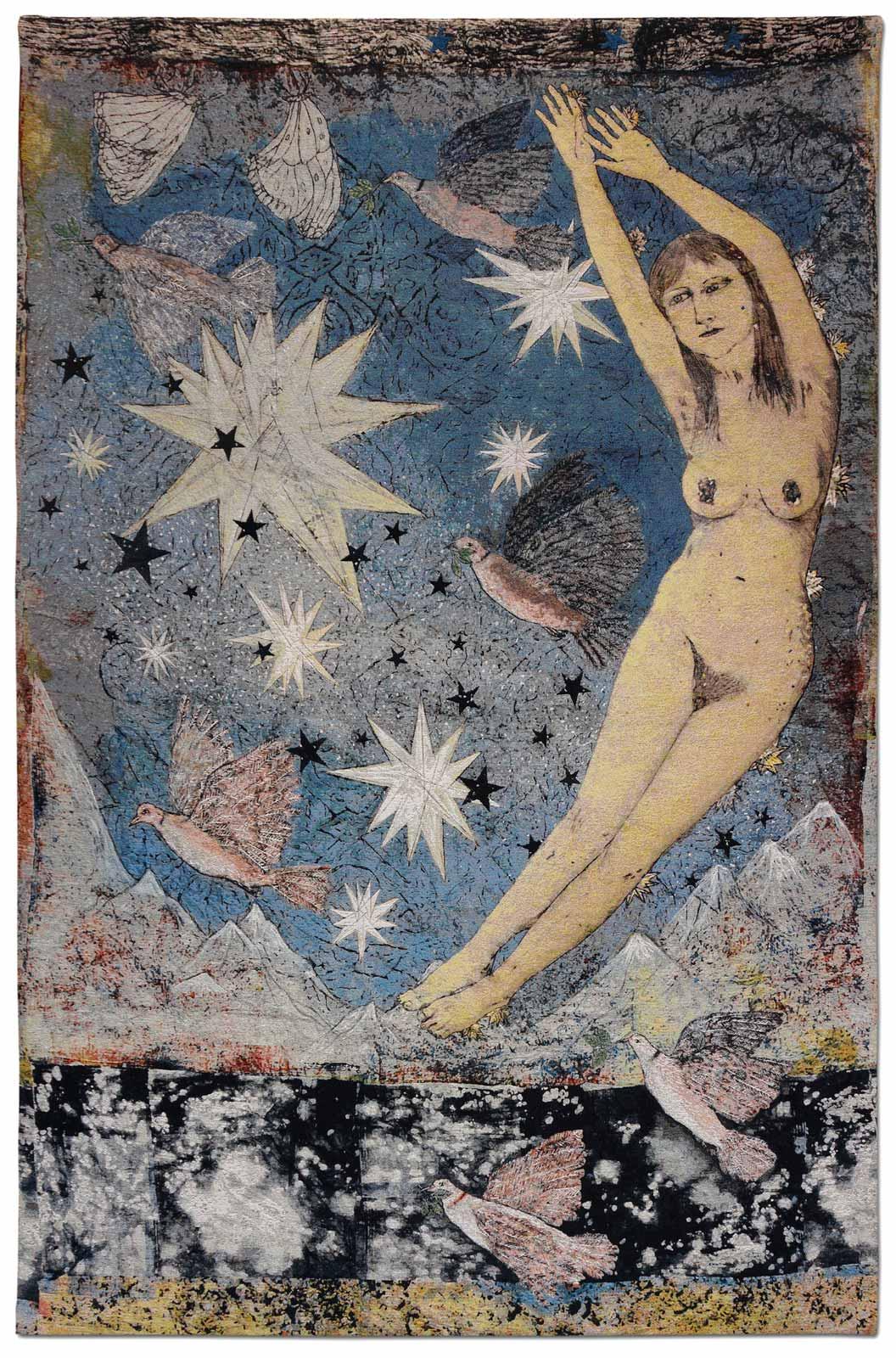 Smith’s earliest works are of body parts, including a tentacle, a cat’s upper torso, and an arm and fist. Later sculptures of an egg, a fetus, and a frog are caught in states of metamorphosis, while a bat, a bird, and a shooting star point to flight. Smith’s objects evoke birth, fragmentation, and regeneration. They harken back to the artist’s Emergency Medical Technician training in the mid-1980s, and reflect her larger interest in pain and healing.

MAO curator Stephanie Straine says that Smith is always “bridging the very old and the very new.” Such is the case with her 12 large-scale tapestries, which conjure the Middle Ages. Smith wanted to make tapestries for some time, but it wasn’t until 2012 that electronic Jacquard looms–a technology originally developed in 1801 and a forerunner of binary computer programming–were sufficiently advanced to reproduce her intricate cartoons faithfully. 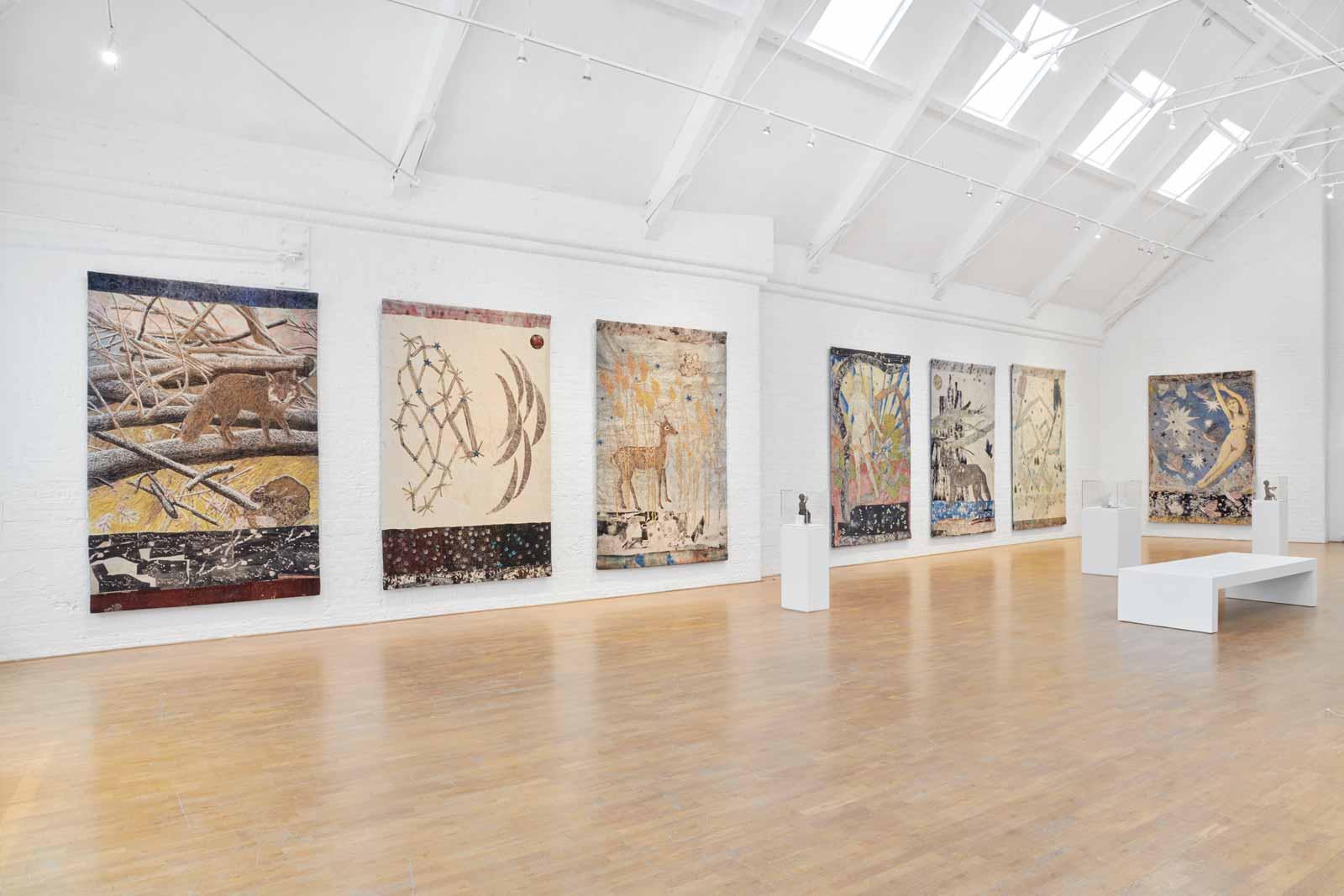 Tapestries on view in Kiki Smith: I am a Wanderer

Smith describes tapestries as a buffer that “makes a cushion between you and the world,” but her lushly-colored, densely detailed textiles contain political messages told in a poetic language. Their floating foxes, spiderwebs, snakes, stars, and women mirror Io’s myth, where the boundaries between humans and nature are thin. Like the rest of her works, Smith’s tapestries remind us of the delicate balance between humans, animals, and habitats. “We are interdependent with the natural world,” Smith says. We need each other for our stories and our survival.