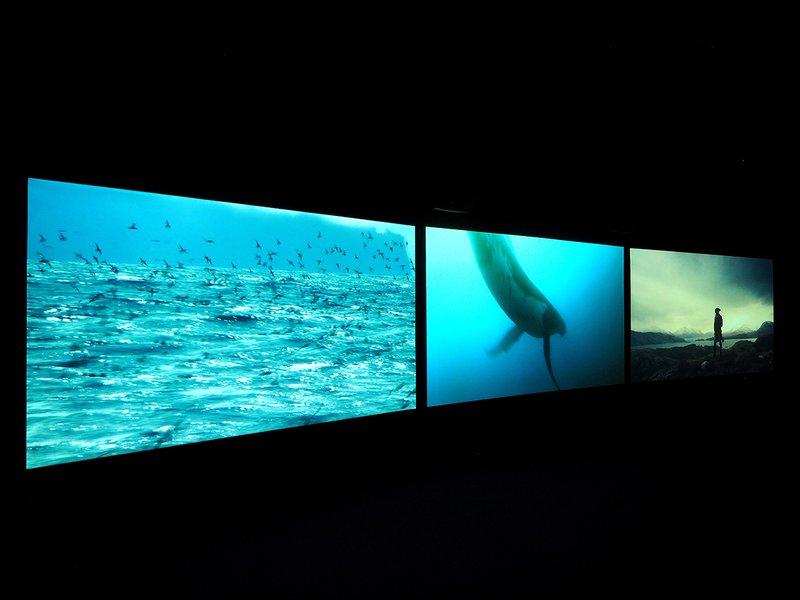 This exhibition is the U.S. premiere of John Akomfrah’s Vertigo Sea (2015), a three-channel video installation comprised of poetic texts, natural history documentary and film essay. This cinematic work, which debuted in 2015 at the Venice Biennale, presents a voyage of discovery, an exploration of water and the unconscious, and poignant reflections on mortality. Vertigo Sea takes the viewer on an immersive aural and visual odyssey, encompassing the greed and cruelty of the whaling industry, the transatlantic slave trade and the current refugee crisis. Akomfrah’s intricately woven triptych positions this crisis in a longer historic perspective of race and migration.

Vertigo Sea will be paired with an unprecedented presentation of a grandly scaled oil painting by the English Romantic artist J.M.W. Turner, in SFMOMA’s media arts special exhibition gallery. Turner’s tumultuous painting The Deluge, first exhibited in 1805, was specifically selected by Akomfrah and will be on loan from Tate, London. The Deluge depicts the terror of the Biblical flood in a strongly emotional manner, evoking the idea of “sublime” art that is both disturbing and awe-inspiring.

Akomfrah’s Vertigo Sea, shot in the Faroe Islands, the island of Skye and the Northern regions of Norway, alludes to Ralph Waldo Emerson’s “sublime seas” through its painterly compositions and has as its narrative spine two remarkable books: Herman Melville’s Moby Dick (1851) and Heathcote Williams’ epic poem Whale Nation (1988), a harrowing and inspiring work which charts the history, intelligence and majesty of the largest mammal on earth. Excerpts of the texts are narrated and sensitively layered with a range of visual footage to create a dense portrait that exposes the greed, horror and terror associated with the whaling industry. Placed in the context of San Francisco, Vertigo Sea also creates a conversation with the city's maritime history of the 19th- and 20th-centuries and its position as a port for migrants from the Pacific — signifying the start and end of epic journeys in the past and the present.

The title, Vertigo Sea, evokes a sense of dislocation that echoes through the narrative as it shifts from archival to new footage, slipping seamlessly between past and present, real and imagined, and depicting life above and below the waves as being simultaneous yet disconnected. The sea itself is positioned as a source of dichotomy: on the one hand, a rich source of life, movement and stunning visual beauty; on the other, a site for mass murder, political instability and unaccountability.

The HD-video installation with surround sound has a total running time of 48 minutes.

Born in Accra, Ghana, John Akomfrah lives and works in London. A founding member of the influential Black Audio Film Collective in the 1980s alongside longtime collaborators David Lawson and Lina Gopaul, he is an artist and filmmaker whose works are characterized by investigations into personal and collective histories, memories and literary references. His works are often constructed from a combination of original footage and archival material, and driven by an urge to give voice to the experience of the African diaspora in Europe and the U.S.

Akomfrah is the winner of the 2017 Artes Mundi Award, the largest art prize in the U.K. and one of the most significant in the world. He has had numerous solo exhibitions including Barbican, London (2017); Whitworth Art Gallery, Manchester, U.K. (2017); University of New South Wales, Paddington, Australia (2016); STUK Kunstcentrum, Leuven, Belgium (2016); Arnolfini, Bristol, U.K. (2016); Bildmuseet Umeå, Sweden (2015); Eli and Edythe Broad Art Museum, Michigan (2014); Tate Britain, London (2013–14) and a weeklong series of screenings at The Museum of Modern Art, New York (2011). He recently produced the new film installation Precarity for New Orleans’ Prospect.4.

On Saturday, March, 10, 2018, SFMOMA will host a film screening and panel discussion with John Akomfrah. In addition, as part of the Public Knowledge initiative, the museum’s Department of Education and Public Practice will work with John Akomfrah on a research project examining Oakland as a hub for the Brotherhood of the Sleeping Car Porters, the first official African-American–led labor union in the U.S., and will present a series of related talks and screenings in March 2018.