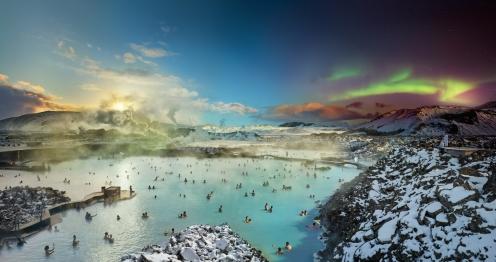 Image from A Witness to Change by Stephen Wilkes

Bryce Wolkowitz is pleased to present its third solo exhibition of photographs by Stephen Wilkes.

Day to Night is an ongoing global photographic project that visualizes an entire day in one image. Wilkes photographs from a fixed perspective from dawn until night, capturing myriad moments in extraordinary locations around the world. While the earth rotates on its axis, Wilkes' camera absorbs the changes in light and color, exploring the space-time continuum within astonishing two-dimensional still photographs.

The aestheticized historical documents that began in New York ten years ago have led Wilkes further afield, taking his practice literally out into the world as his focus has shifted from fast-paced cityscapes to the rapidly changing natural world. This recently took him as far away as to Iceland, Africa and the wilds of Bella Coola, British Columbia, where climate change has left the rivers hotter and drier, leading to fewer fish for grizzly bears to feed on. Now on site in Greenland, Wilkes is working to capture the historic glacier melt for his newest Day to Night photograph.