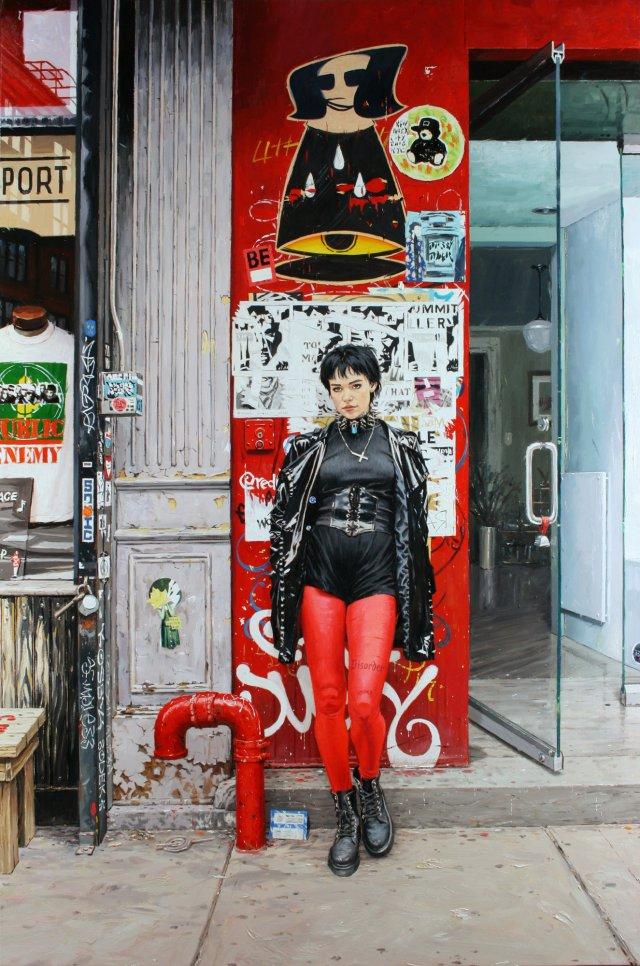 Vincent Giarrano is an artist-flâneur, an observer of city life. He is alert to the compositional possibilities of architecture experienced at street level, especially under the changing effects of light. His milieu in New York City’s SoHo, a neighborhood of Beaux-Arts cast-iron palazzos, lately repurposed as art galleries and upscale boutiques. Giarrano clearly relishes the handsome façades but as a painter rather than an architectural documentarian. Buildings provide arrangements of rectangles, spaces he fills with gestural paint-handling in an urban-tonalist palette of black, rust, pearl, and battleship grey. Doorways and windows, often framed in pilasters, function scenographically, too, as backdrops for the casual drama of everyday life. His dramatis personae consists mainly of stylish urbanites, mostly young women-walking quickly across intersections or sitting on low steps, often talking on their cellphones, or congregating in front of shop windows. The individuals remain anonymous, but the ways they move and the ways they dress have an anthropological interest. In a metropolis where real estate is expensive and the communal life is vibrant, the streets are extensions of personal space. Giarrano’s mise-en-scène reflects that dynamic. For him, cityscape and genre painting, exterior and interior are fluid categories. Protagonists stand casually chatting in front of complex backdrops: one window may be a vitrine displaying chic clothing; another may be a ghostly mirror, capturing the image of a façade across the street. Giarrano’s streetscapes explore the relationship of figure to setting, specifically the way bodies move through space. He isolates vignettes from the flow of people in motion, bringing into sharper focus some visual incident you might glimpse out of the corner of your eye. The hectic animation of his street scenes falls away in his apartment interiors. A rumpled bed—occupied by a napping human or cat, or invitingly empty-is both a cocoon and a meditation on the color white. Outside or in, in a crowd or alone, Giarrano translates the pulse of the city into the visual rhythm of his paintings. - Gail Leggio