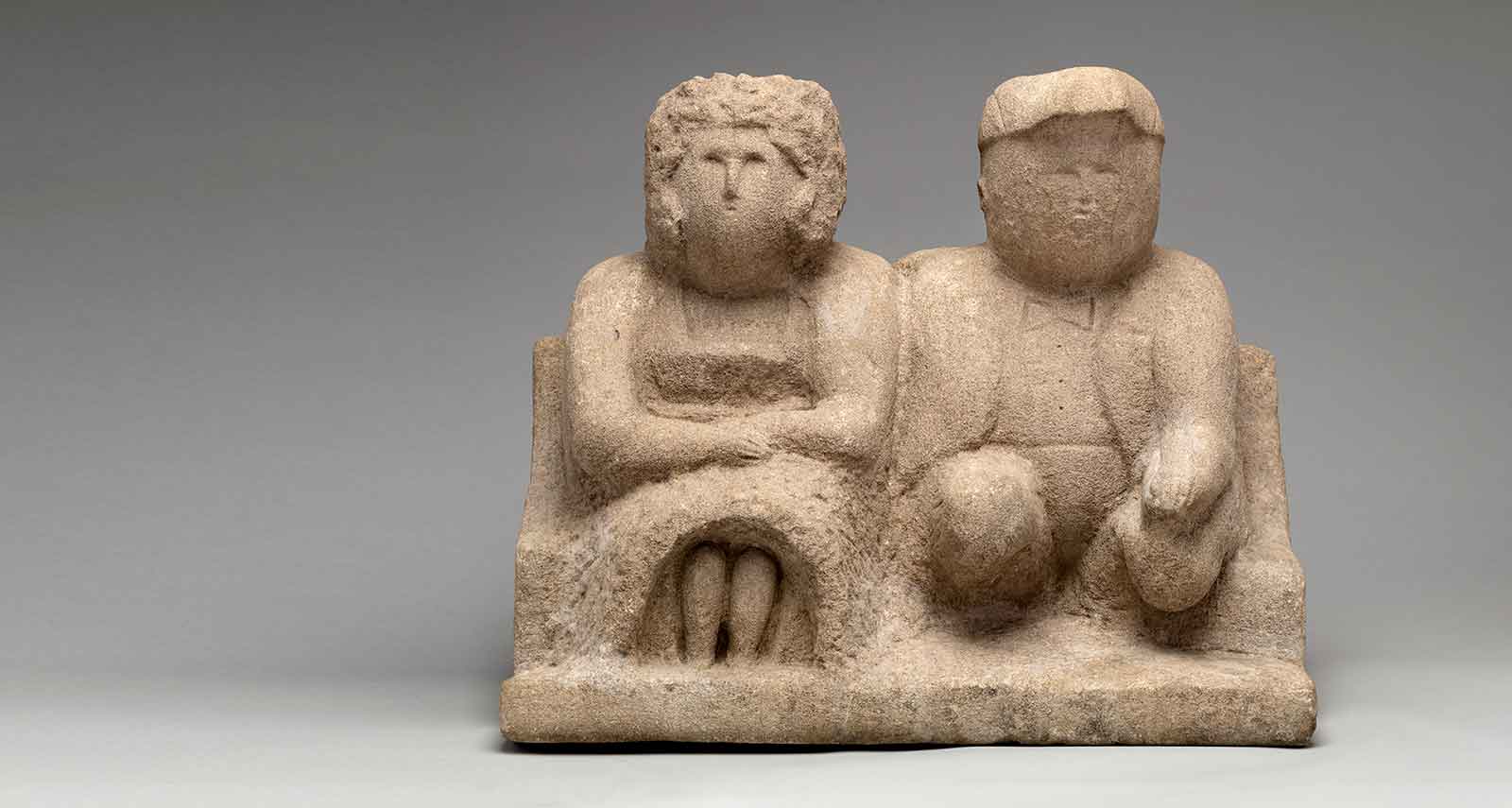 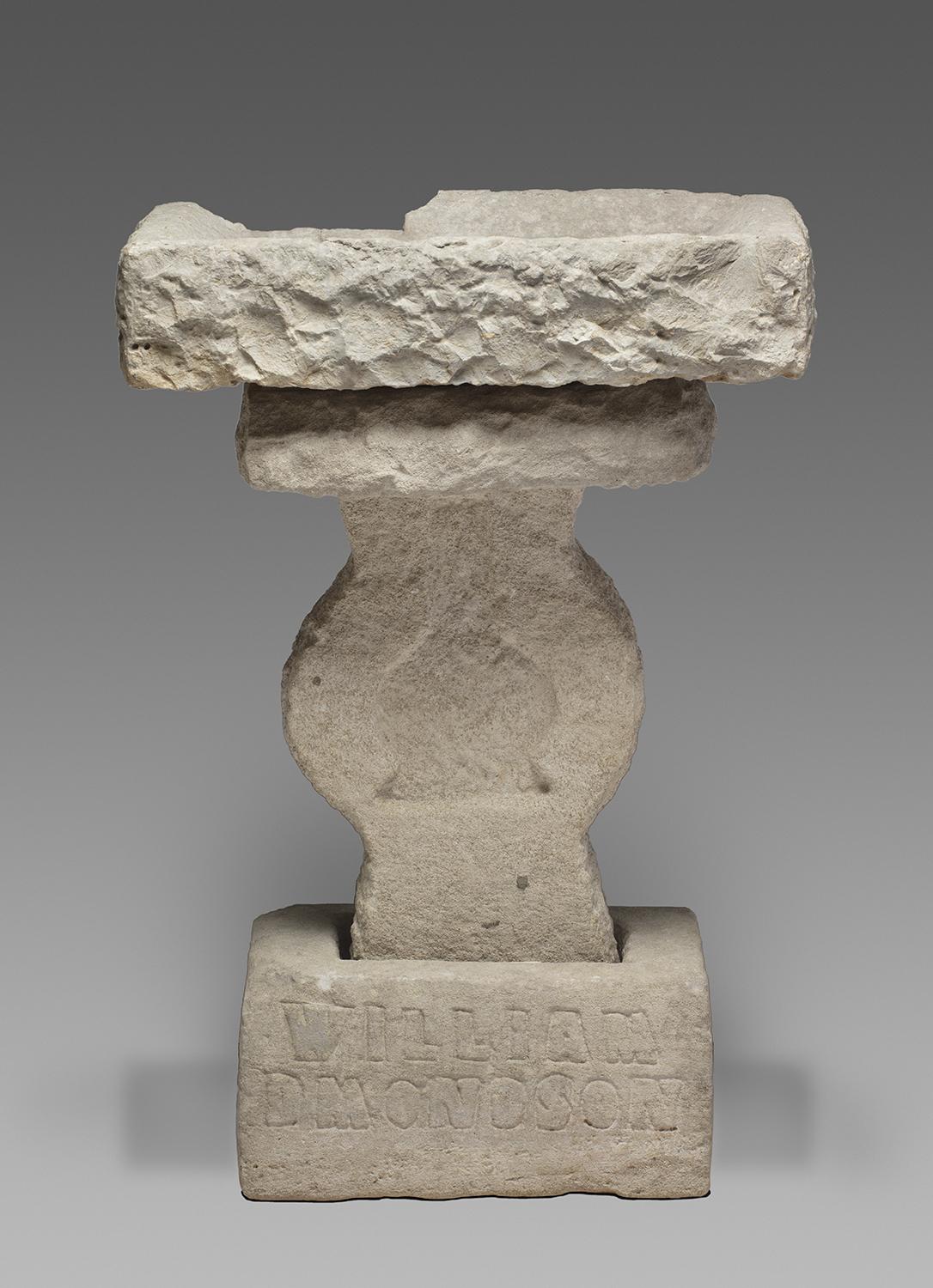 “William Edmondson did not set out to become one of the most significant self-taught artists of the twentieth century, but he also did not work in obscurity, passively waiting to be discovered by wealthy, white patrons and the art world establishment.”

When, at the age of fifty-seven, William Edmondson began sculpting discarded limestone, he transformed the material into tombstones to adorn the final resting places of neighbors, family, and friends.

In 1931—between the Great Depression and segregation—a beautiful tombstone was often a privilege denied. Edmonson had lost his janitorial job at a Nashville hospital and felt inspired to pursue a new passion as a sculptor, drawing on the skills he’d learned as a stonemason’s assistant. With salvaged limestone that had been cast off from demolition sites and other sources, he created something people needed, turning what had been refuse into something meaningful.

The artist was born in 1874, in Tennessee’s Davidson County to Jane and Orange Edmondson who had been enslaved and were still sharecroppers. While the white cemeteries of nineteenth-century Tennessee were filled with elaborate, Victorian statuary in granite and marble, the markers for Black cemeteries tended to be more humble. Chiseling away at the limestone, Edmondson sculpted angels, lambs, doves, and figures of people, making memorials imbued with the Christian spirituality that drove his practice. Sold out of his front yard, these pieces offered his community monumentality and dignity to honor their dead. 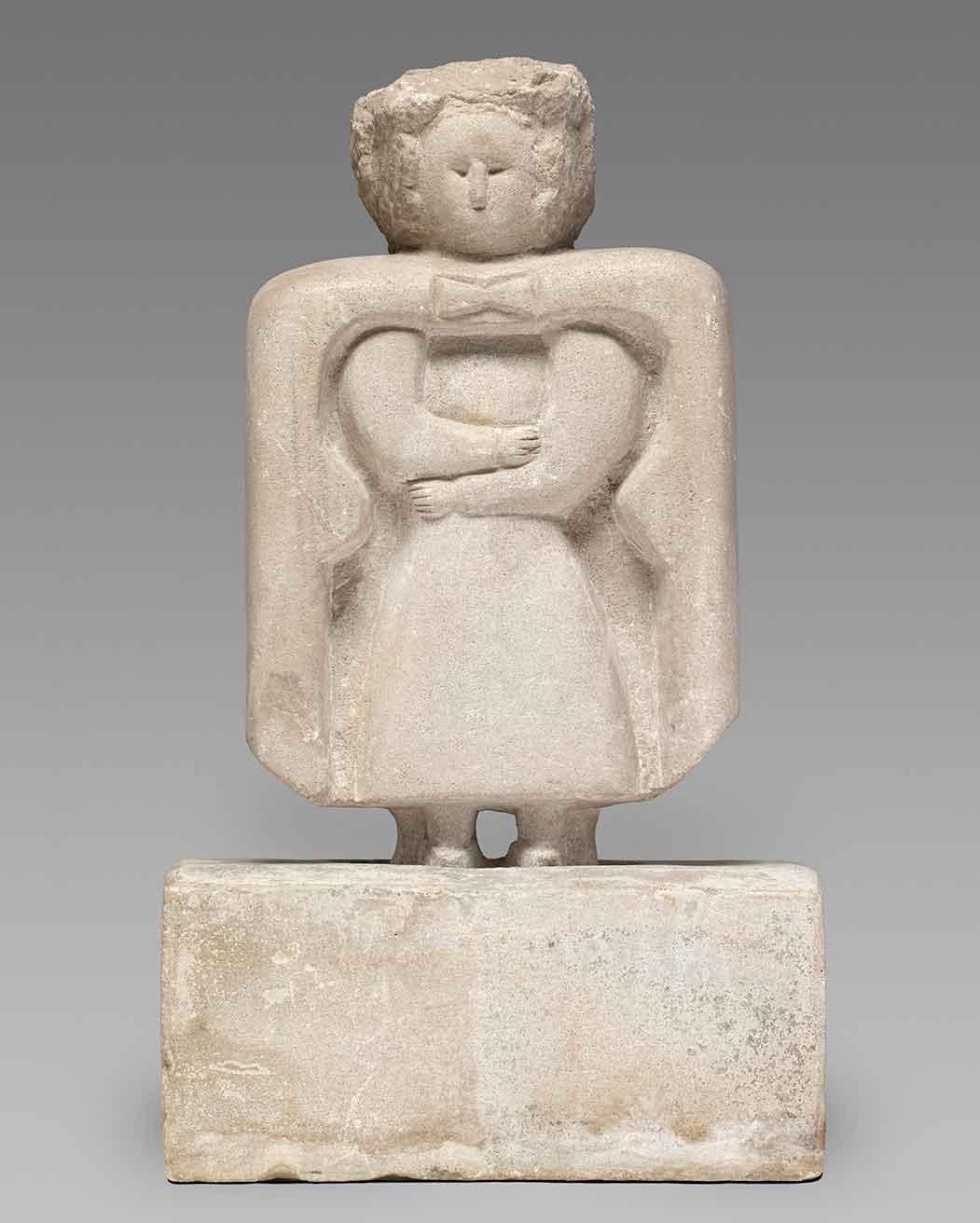 William Edmondson, Girl with a Cape.

Although he came to art late in life, Edmondson was prolific, soon expanding from tombstones to sculptures, birdbaths, and other functional and ornamental art. His work soon drew the interest of collectors and, by 1937, he was the first African American artist to have a solo show at the Museum of Modern Art (MoMA) in New York. He exhibited in Paris at the Jeu de Paume in 1938 and Edward Weston even stopped by to photograph Edmondson in his workshop.

Despite this international profile, the Nashville artist is perhaps not as well-remembered as he should be. In 2018, his home was nearly sold by the city until public opposition rallied against the plan. In 2020, a historical marker was finally erected near his home and in Nashville’s Edgehill neighborhood. Despite the numerous headstones he crafted for others, the grave where he was interred in 1951 is unmarked, and its location within Mount Ararat Cemetery is unknown.

But now, the Cheekwood Estate & Gardens in Nashville is exhibiting the first major museum show on Edmondson in more than twenty years, bringing together examples of his sculpture along with photographs of the artist and his work. The Sculpture of William Edmondson: Tombstones, Garden Ornaments, and Stonework, on view through October 31 at Cheekwood with a concurrent display at Fisk University Art Galleries, features works from Cheekwood’s collections as well as loans from private and public collections.

The show is not just shedding more light on the artist. Curators have also determined to highlight how—as a self-taught, minority artist—Edmondson’s work has often been wrongly described by art historians and critics as “naive” or “primitive” and the narrative of his story has frequently centered on the white collectors who “found” him. 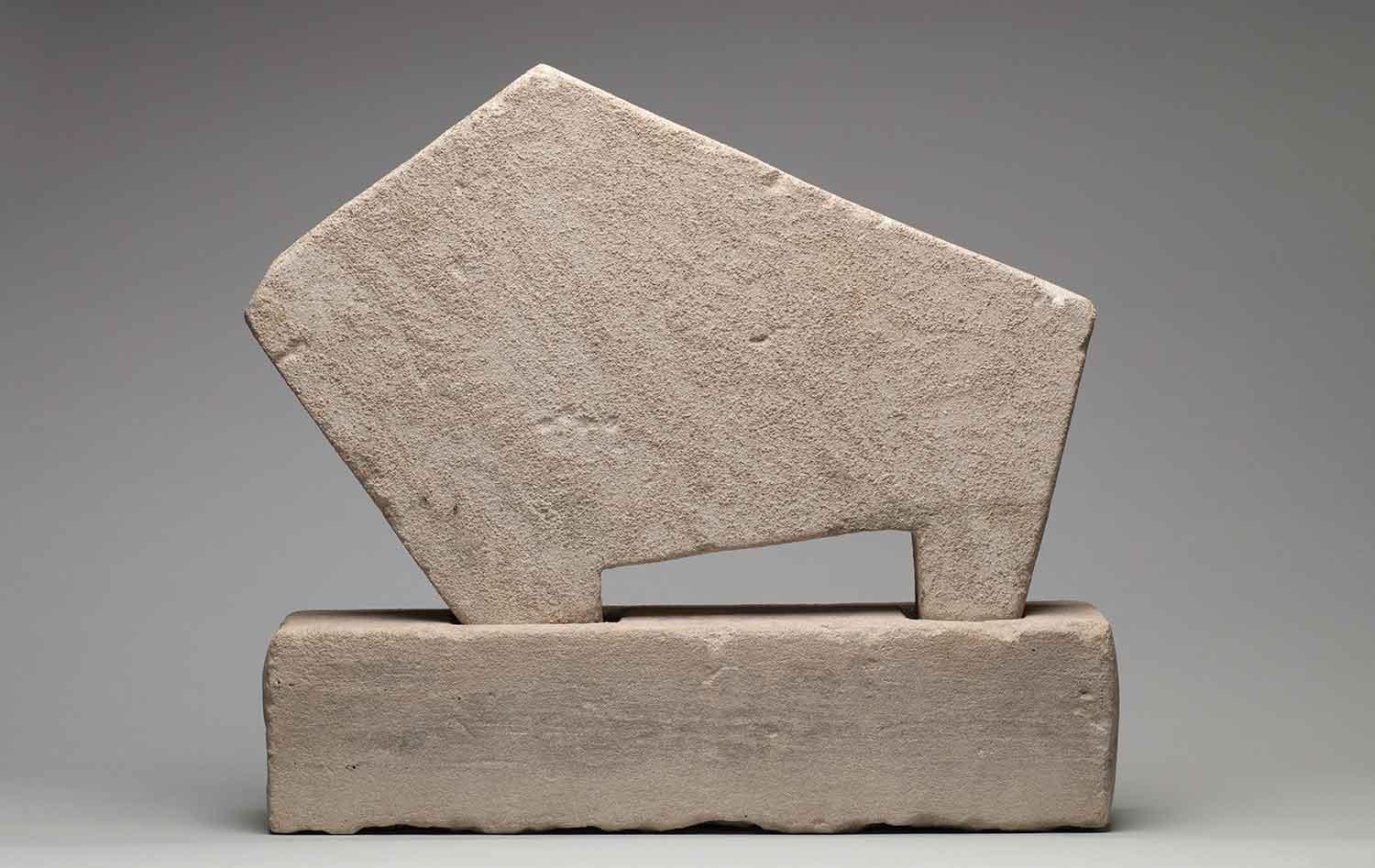 “William Edmondson did not set out to become one of the most significant self-taught artists of the twentieth century, but he also did not work in obscurity, passively waiting to be discovered by wealthy, white patrons and the art world establishment,” said Marin R. Sullivan, curator-at-large at Cheekwood Estate and Gardens.

The exhibition’s title references the “Tomb-Stones. For Sale. Garden. Ornaments. Stone Work W M Edmondson” yard sign where Edmondson advertised his art. This all aligns with Sullivan’s broader goal to underline the artist’s agency as a creator and self-promoter as well as his intention for his work to be viewed in outdoor spaces.

“Unfortunately, there have been a number of tropes that have become widely circulated in discussions of William Edmondson, some of which are false and others which do a disservice to understanding and appreciating fully Edmondson’s achievements,” Sullivan said. “Namely, that he was an isolated, illiterate Black man who started carving due to divine intervention and was ‘discovered’ by white patrons, whose attention catapulted him to the upper echelons of the art world.” 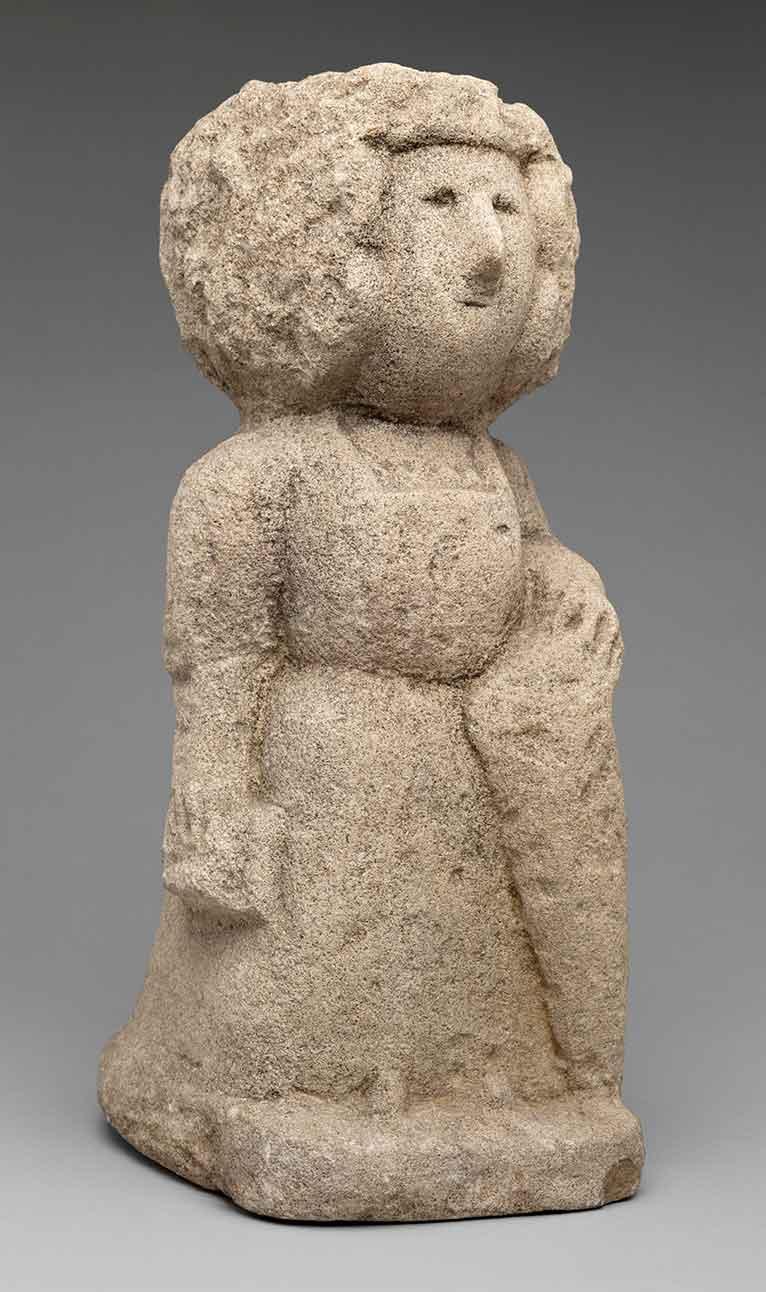 The press release for the 1937 MoMA exhibition, for instance, reinforced these misconceptions and that his art was a calling “to fashion at God’s command.” Edmondson had once stated of his artistic genesis, “I heard a voice telling me to pick up my tools and start to work on a tombstone. I looked up in the sky and right there in the noon daylight He hung a tombstone out for me to make.”

Yet, as art historian Lowery Stokes Sims wrote in the 1991 The Art of William Edmondson, published in conjunction with a Cheekwood exhibition, Edmondson was “expressing in his own idiom the workings of the creative process” in a way that is “not very different from the process as described by any number of artists.”

For Sullivan, revisiting Edmondson’s work in this 2021 exhibition is an opportunity to recenter the artist in his own narrative. “Yes, Edmondson was the first Black artist to receive a solo exhibition at the Museum of Modern Art in New York, and yes, he is arguably the most famous sculptor of the twentieth century who called Nashville home,” she said. “But of equal if not more importance—at least to me—is that he decided, in his fifties, to teach himself how to carve limestone, committed to a new career, and started a small business in the early 1930s, at the beginning of the Great Depression, in the Jim Crow South.”

An accompanying catalog, published by Vanderbilt University Press and edited by Sullivan, further examines Edmondson within the context of 1930s Nashville, the manner in which his work was documented through photography, his practice as a businessman, and the cemeteries where his art can still be seen. Author Betsy Phillips, who contributed an essay to the publication, has been investigating the surviving examples of these tombstones. Less than forty are extant in burial grounds around Middle Tennessee. As Phillips notes, these tombstones, although deteriorated, “remain the most accessible places to see Edmondson works,” with major exhibitions infrequent and local institutions like the Tennessee State Museum only displaying a handful of sculptures.

“The issue with preserving and increasing attention for Edmondson’s carvings still in situ is a tricky one,” Sullivan said. “On the one hand, seeing one of his carved tombstones in a Nashville cemetery offers a palpable understanding of how these carvings were intended to be used; many of his objects were functional, meant to be appreciated and seen outdoors in the urban environment, not behind plexiglass in a gallery. On the other hand, many of the carvings installed at cemeteries have suffered, as Betsy Phillips writes, at the hands of vandals, neglect, and the elements.”

Cheekwood has the largest public collection of Edmondson’s work and access was an essential part of The Sculpture of William Edmondson, such as including a presentation at the Fisk University Art Galleries located in the historically Black university. Edmondson exhibited there in his lifetime at a 1948 Spring Arts Festival. Although the MoMA exhibition is regularly cited in his impact, these local shows are vital to remember in revealing his connection to the city where he sculpted everyday people like teachers, nurses, and preachers along with icons such as boxer Jack Johnson and First Lady Eleanor Roosevelt. All of Edmondson’s art and related works in the Cheekwood permanent collection have also now been digitized for the first time. 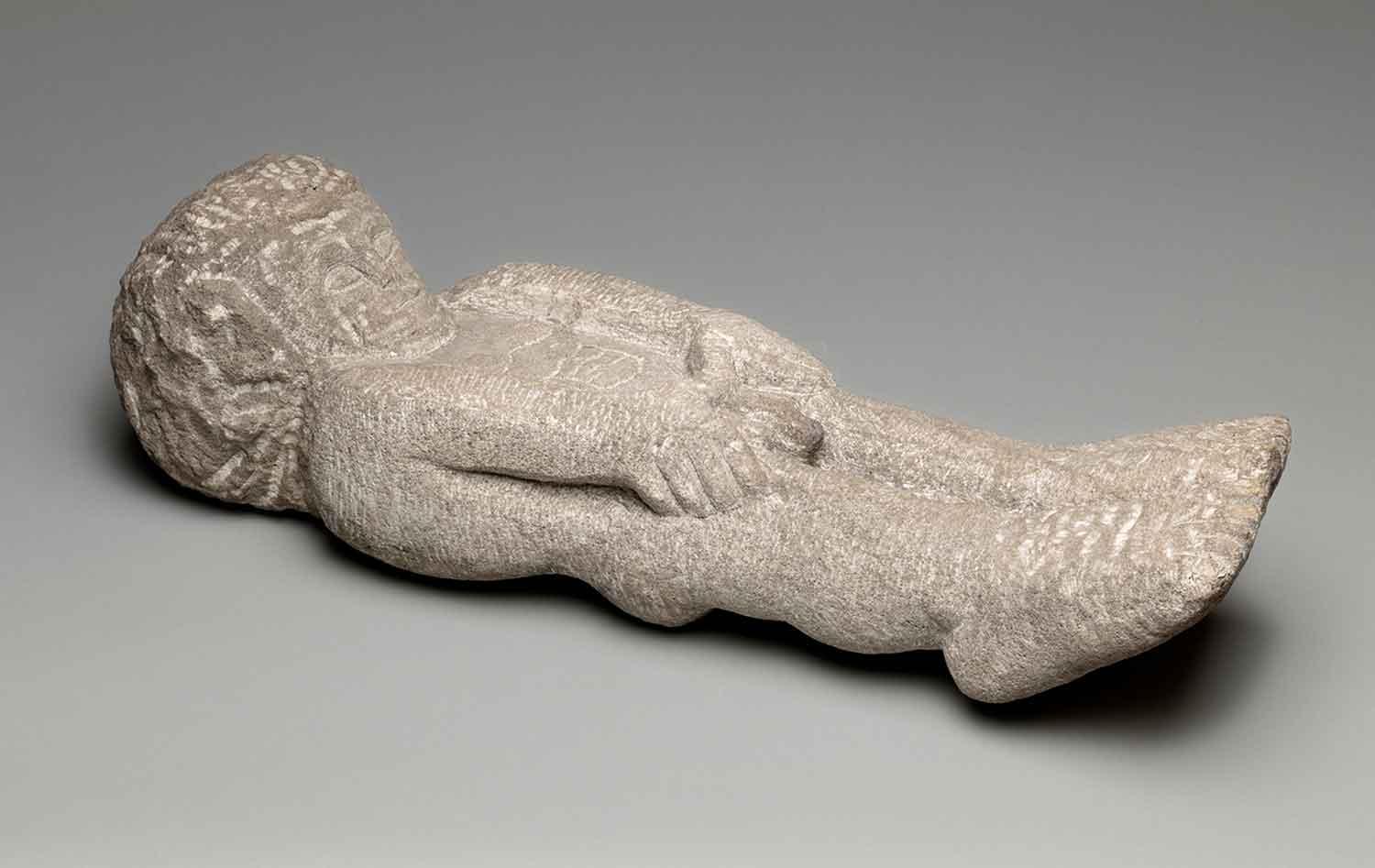 The Sculpture of William Edmondson shows a working artist who cut his own path, immortalizing, in roughly hewn form, the people around him. Even if the public spaces they occupied were cemeteries and front yards, these artworks emphasized their presence and value, whether a church lady in her Sunday best or a seated couple joined at the shoulder by stone.

It is significant to consider Edmondson’s legacy in this context of creating outdoor sculpture at a time when Nashville and many other cities are reevaluating who is being monumentalized in statuary. In the limestone that no one else wanted, Edmondson allowed his community to be seen.