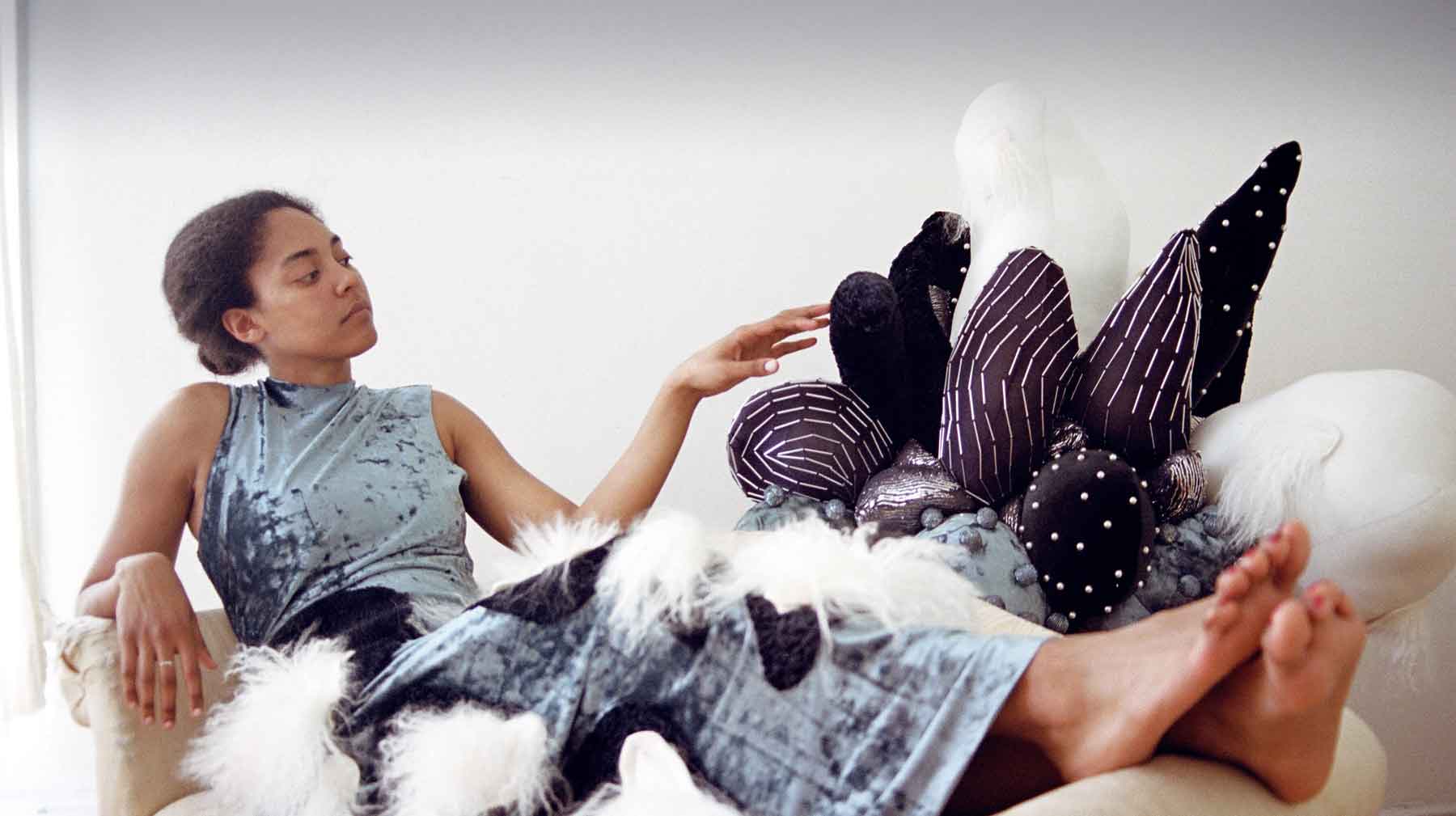 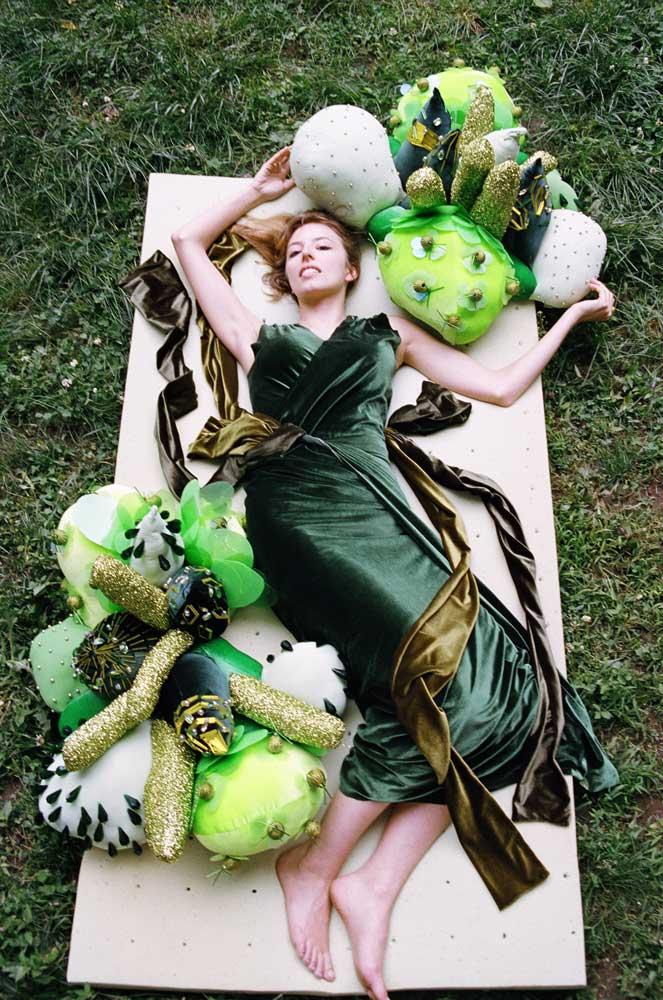 “I wanted to make portraits of mostly queer, femme presenting women on this huge scale”

“I am no Eva Hesse, but I had an Eva Hesse moment,” begins Allison Morgan, showing me a series of soft sculptures that she refers to as Cash Cow. Crafted in various warm shades and textures of knit fabrics and covered in beads, Cash Cow feels like an otherworldly crustacean, rendered in extravagant detail. “I walked into a store on Canal looking for vinyl and came out with nine orange tubes instead,” she says, pointing to several, protruding orange stems. Eva Hesse “would just grab really random materials and make crazy forms with them so I was trying to channel her a bit.”

This is the kind of wondrous, star-crossed story that Morgan often doles out, mystically told, providentially referential to female artists across history. Her pieces, which range from enormous, paneled portraits to succulent-sized sculptures, seem to take on lives of their own, while reflecting profoundly on the lives that we have.

Morgan’s upcoming show, Fodder, at The Living Gallery (June 26-27; Bushwick) grapples with themes inherent to Cash Cow: female representation, costume, feminine labor techniques, the worth of women’s art, concepts that have long been essential to the her own work. At age 24, Morgan—even as she experiments—has a remarkably clear vision and voice. She graduated from the Brown and Rhode Island School of Design dual degree program in 2016, with majors in Apparel Design, Art History, and French and a dedication to honoring traditionally dismissed “women’s tasks,” like embellishment. Now Brooklyn-based (but soon, LA-bound), Morgan has shifted her focus from apparel design to the visual arts. Fodder reveals a cohesive series of beaded, fiber-based soft sculptures and photographic portraits, fueled by Morgan’s design experience and a desire to examine art history and the female experience. 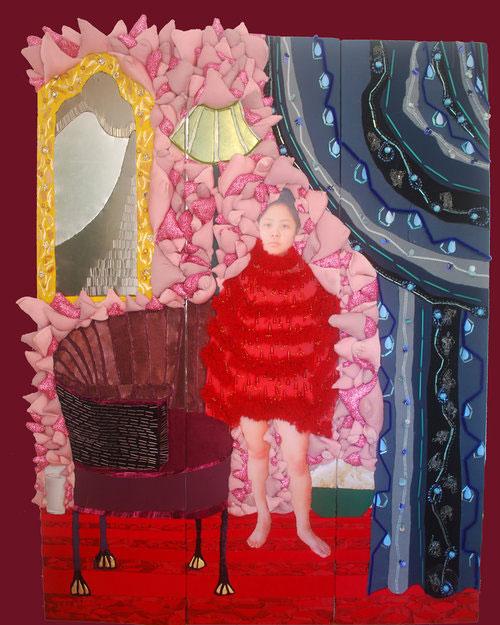 For Fodder, “I wanted to make portraits of mostly queer, femme presenting women on this huge scale,” explains Morgan. “The idea was to incorporate traditional methods of having figures seated in the interior, in a kind of lush environment.” The result is a striking overlay of fabric, beadwork, and color that feel simply fateful in their composition.

The actual artworks consist of three types: paneled fabric collaged portraits, soft sculptures, and photographic portraits. For the fabric portraits, the method, Morgan shares, consists of taking “a very dull kitchen knife and punching it into the surface.” She first shows me, Rice and Milk, a fabric portrait of her first girlfriend, Mai. It’s a triptych featuring Mai standing in a beaded, overabundant interior, her body swathed in a furry red sweater. The portrait is in homage to her coming out experience, “with enhanced stuffed pink pieces of frustration.”

It is, Morgan says, “sort of Hannah Hoch.” The effect, like with many of her works, is a sense of a world turned inside out, the interior exposed, the unseen as seen. In her knife-punching, Morgan forces out the underside of the fabric. She forces the viewer to look at beadwork, instead of dismissing it as decoration. Likewise, her work is a forced acknowledgment of perspectives and people that have been disregarded, throughout history.

Beadwork, embroidery—these have been undervalued, feminine labors. “I like the idea that it's excessive labor.” She highlights, “I am physically adding every single bead, but I don't think the work is done without being entirely covered in beads.” Morgan’s efforts to deny effortlessness, to expose labor, emphasize, “Everything women do, all of the shit women go through.” The method itself, she reminds, channels the frustration and anger that many women feel towards the present administration.

In this excessive labor, Morgan convincingly conjures a totally new worldscape, on view in her photographic paintings. In these images, she combines her sewn sculptures, costume, and powerful women, participating in environments of her creation. “It is sort of a utopian world, articulated through the visual language I’m creating with clothing, sculpture, and the women in my community.” 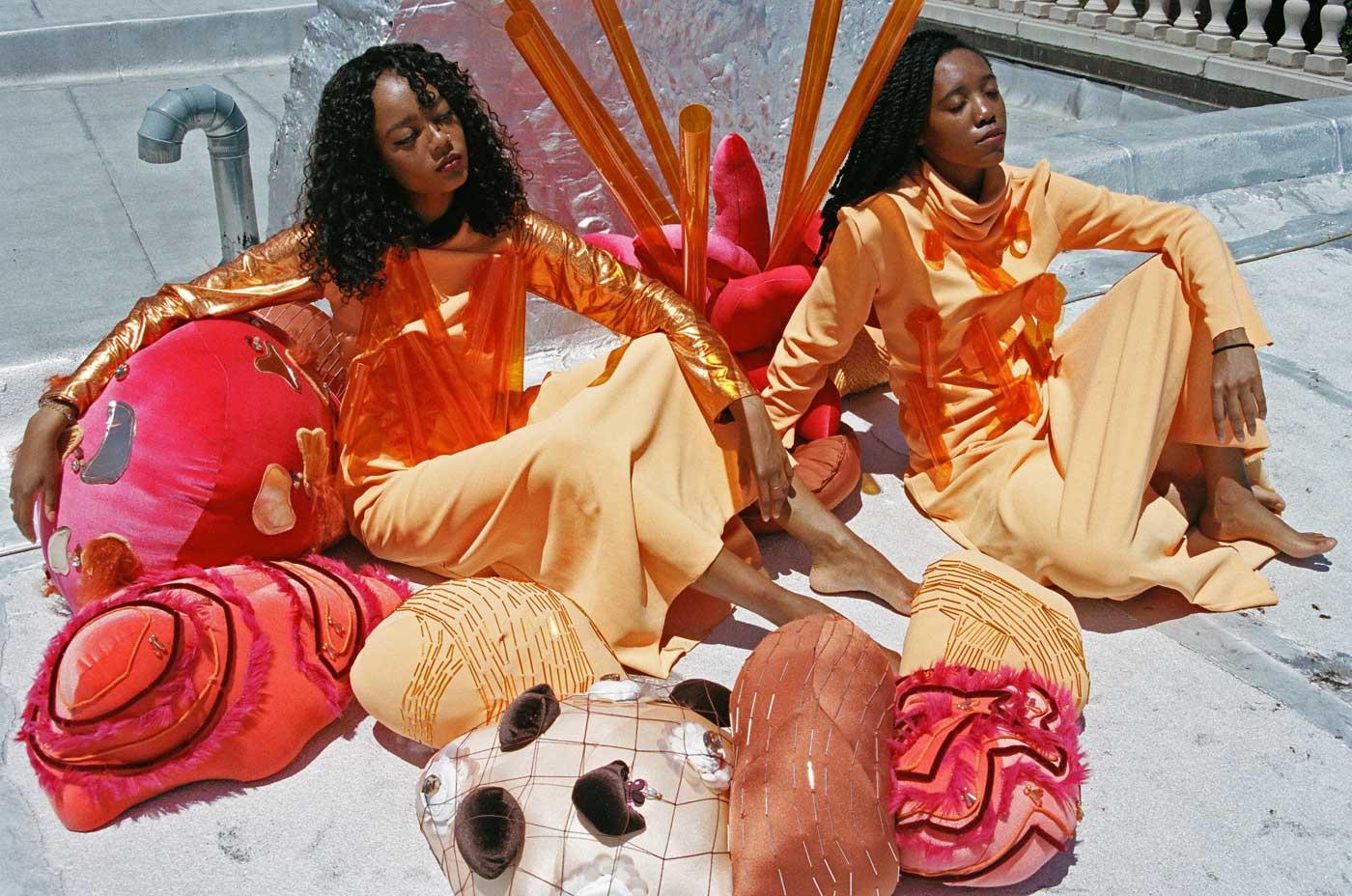 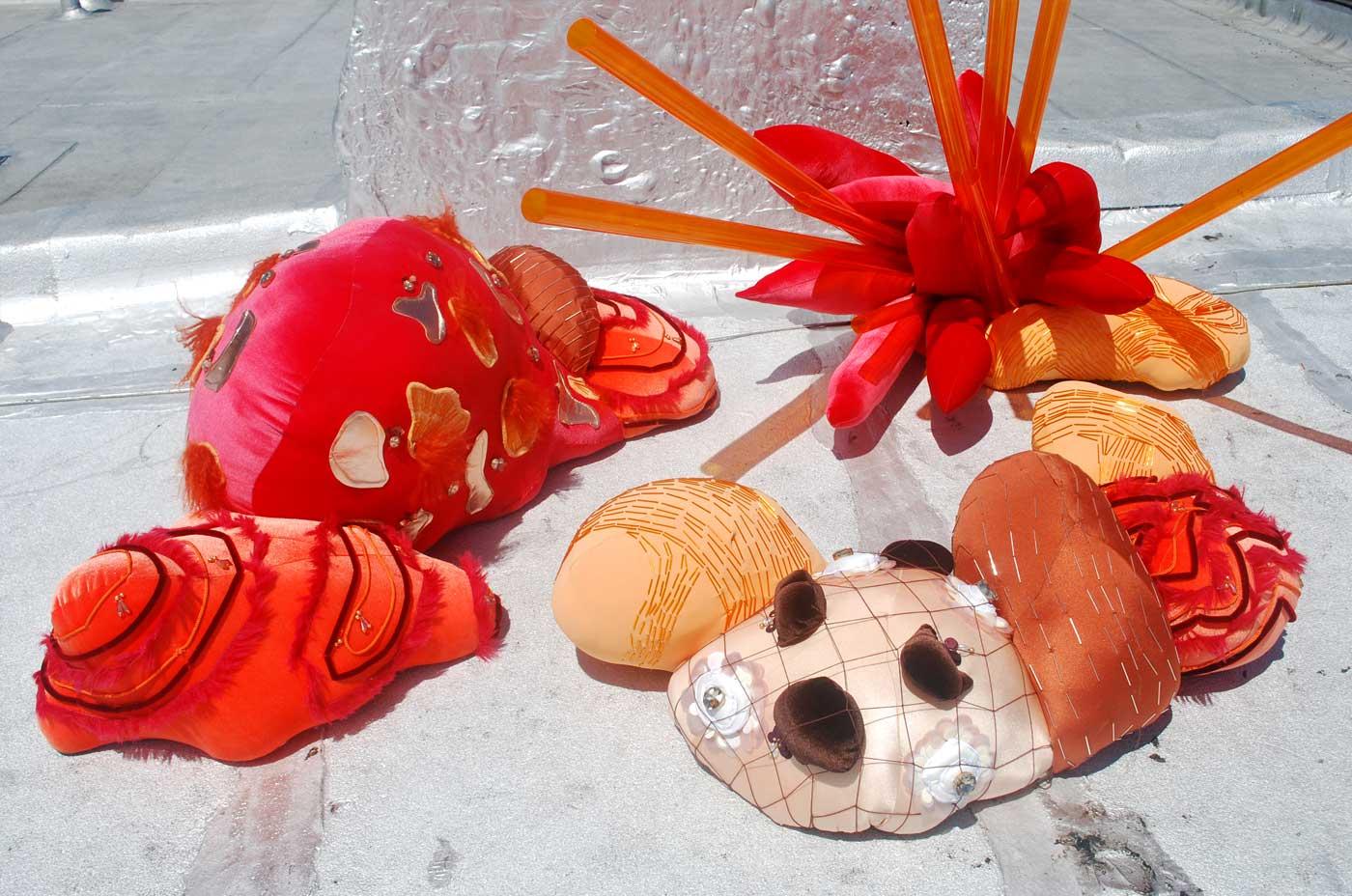 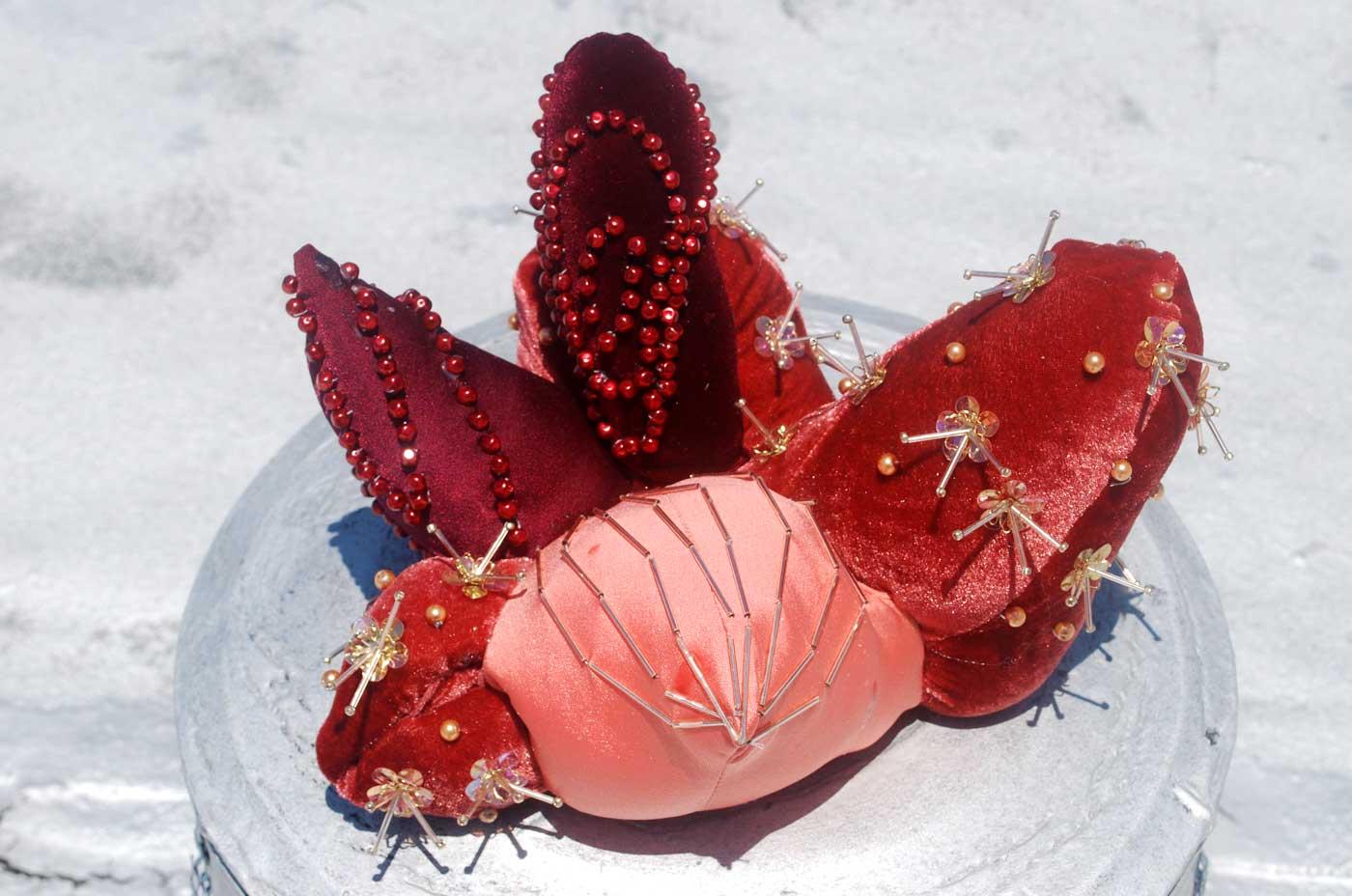 In a Pygmalion-inspired photographic portrait, a woman in steel velvet takes ownership of a blanched room. Her only companion is one of Morgan’s soft sculptures, this time, indigo-violet shapes that overtake a protruding, vaguely phallic white structure. Contextualizing her inspiration, Morgan explains, “Women couldn't really participate in the arts, unless they were a muse or a model, and then they're at the hands of these male artists who oftentimes objectify them or treat them poorly.”

So, instead of the conventional Pygmalion tale of a man objectifying a woman being objectified, “I wanted to show a woman, instead, interacting with a weird object.” Morgan gives the woman control of the object, allows her to interact with something, instead of being interacted with. “I wanted the object to be a sculpture, and the perspective is a female gaze.”

Fodder opens at The Living Gallery, located at 1094 Broadway, Brooklyn, on June 26.

The other elements of the image—the clothes, the beadwork, the dress, the softness—align with her desire to display the performance of femininity. “It’s not just queer women—all women go through these expectations of how feminine you're supposed to be.” Her costume-like ensembles are a means of clothing women and giving “them armor and power in the images I make of them, through an ultra-feminine gaze.”

And that’s the crux of it—Morgan’s work is for all women. It’s for the women artists, both known (she cites Cindy Sherman, Mary Cassatt, Miuccia Prada, Sheila Hicks, Sarah Lucas, Yayoi Kusama, Mickalene Thomas, and Louise Bourgeois among her influences) and unknown. It’s for the women of feminist movements then and now—and the queer women excluded from those movements. It’s for her community of women, her models, for Nyssa Frank who owns the gallery.

“I do get this sense that there aren't enough seats at the table.” And in a characteristic desire for more, to push the boundaries of what we accept as enough, Morgan, looks forward: “I think the next step is having more women involved. Women creating more, supporting one another.” Then, unapologetically and lightly adding, “Oh, I don’t know, fodder for thought!”