A curated selection of items recently sold at auction. We think this month’s objects would fit together nicely in the den of an esteemed gentleman, or a decadent modern mancave. By Sheila Gibson Stoodley
January 2019

A Toast to Record-Breakers 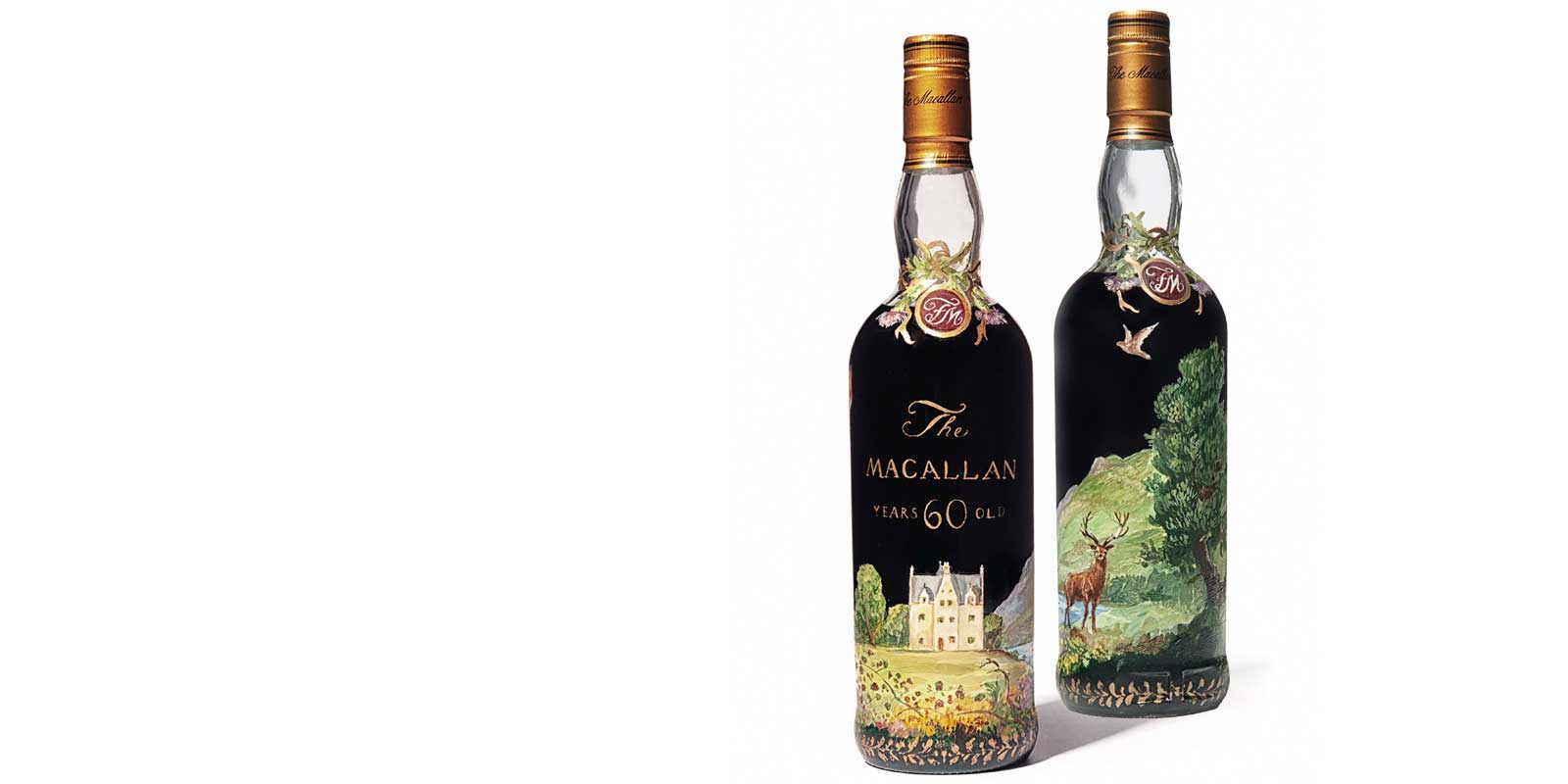 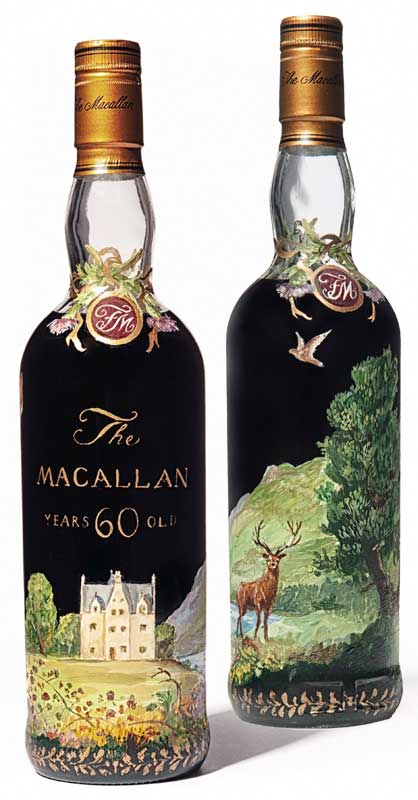 A Toast to Record-Breakers

Watching an auction record break never gets old, but what happened at Christie's London in late November was extraordinary. It marked the third time in less than a year that the auction record for a single bottle of whisky turned over. All three victors came from the same Macallan cask, number 263, and all three sold for more than $1 million in U.S. dollars.

The mad run began at Bonhams Hong Kong in May, when one of the twelve bottles of Macallan 1926 60 Year-Old decorated with a label by artist Peter Blake sold for HK $7,962,500, a price that's just above seven figures in US dollars. Its performance evidently encouraged other owners to consign. Bonhams broke the world auction record for a single bottle of whisky again on October 3 in Edinburgh, Scotland with the fifth of twelve bottles of Macallan 1926 60 Year-Old to feature a label by Valerio Adami. It commanded £848,750, which translates to more than a million U.S. dollars. About a week later, Sotheby's New York sold a Blake-label bottle for $843,200—a healthy sum, but not a record. The bottle Christie's sold after Thanksgiving fetched the U.S. equivalent of $1.5 million, decisively claiming the record for itself.

"Whisky is the spirit of the moment," says Tim Triptree, Christie's International Director of Wine. He credits "a combination of factors" driving the demand for the Macallan 1926 60 Year-Old: "Rarity, popularity, and the intrinsic quality of the property. Whisky is special."

This particular Macallan whisky is extra-special. Bottled in 1986, it's inevitably described as a "holy grail" among single-cask limited editions. It's fair to assume that the distillers at Macallan in 1926 did not deliberately set out to create a 60 year-old spirit. They probably would have found the notion hard to grasp, as it would require them to monitor a single cask for decades and place their faith in distillers who hadn't been born yet. Also, it takes more than time to make a 60 year-old whisky worthy of million-dollar bids. Few are fit to continue aging in-cask for that long, and it takes a string of master distillers to nurture the ones that can go the distance. A 60 year-old is a rare beast, and always will be.

Cask 263 yielded 40 bottles, including the 24 for which Blake and Adami each designed a dozen labels. The Christie's bottle was a one-off sold through the famed London emporium Fortnum & Mason in 1999 and decorated with images of Easter Elchies House, the circa 1700 structure at the heart of the Macallan estate in Speyside, Scotland.

The three record-setting bottles have something else in common beyond a shared brand and cask: Asian bidders won them. Martin Green, a whisky specialist at Bonhams, says, "Certainly, Asian buyers have always been in the market. There's been more and more interest, and education on the subject has expanded and is expanding. More are coming to Scotland than they did 20 years ago."

It's unclear how long the latest record will last, but demand for elite whiskies will only grow. Unlike wine, which continues to age while stored in a cellar, bottled whisky remains stable. As long as its owner keeps it well and disasters don't intervene, the spirit will taste like it did when the distiller declared it ready to leave the cask. 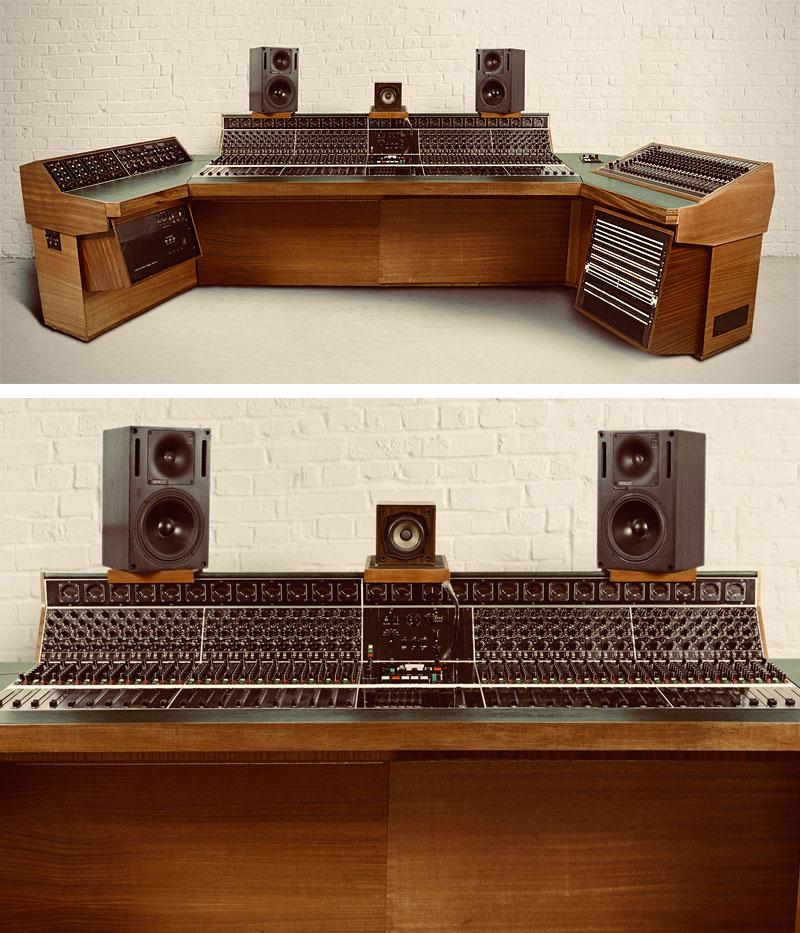 Buying the Stairway to Heaven Console

Great songs spring from the minds of musicians, but they’re polished into hits in the recording studio. After working at Abbey Road Studios and Olympic Studios, British audio engineer Dick Swettenham went into business for himself in 1969, building recording consoles to order. Audiophiles in the know still speak of his Helios units with reverence. Bonhams offered a unique Helios machine in December with a remarkable history.

Dubbed the HeliosCentric Helios console, it unites two Helios machines. The center comprises parts of both, but the left side consists of the Island Records Basing Street Studio 2 Helios Console, used by Led Zeppelin to record songs for Album IV, including Stairway to Heaven, and by Bob Marley & The Wailers for their albums Burnin’ and Catch a Fire. The right side first belonged to Alvin Lee’s Space Studios, and served the needs of George Harrison, Mick Fleetwood, Ron Wood, and many others.

In 1996, Elvis Costello and Chris Difford of Squeeze retrieved the consoles from storage and combined them into a 38-channel behemoth with the help of Swettenham. Modern users of the HeliosCentric Helios include Sia, Dido, Supergrass, and the Pet Shop Boys. The winning bidder of the analog treasure, who paid the U.S. dollar equivalent of $141,321, must forge ahead without the guidance of Swettenham, who died in 2000. But even if it never yields another legendary song, its owner can still point to the console, decorated in its exquisitely 1970s-era mahogany veneer and leatherette, and say, “See that? Led Zeppelin recorded Stairway to Heaven on that,” and bask in its inherent coolness. 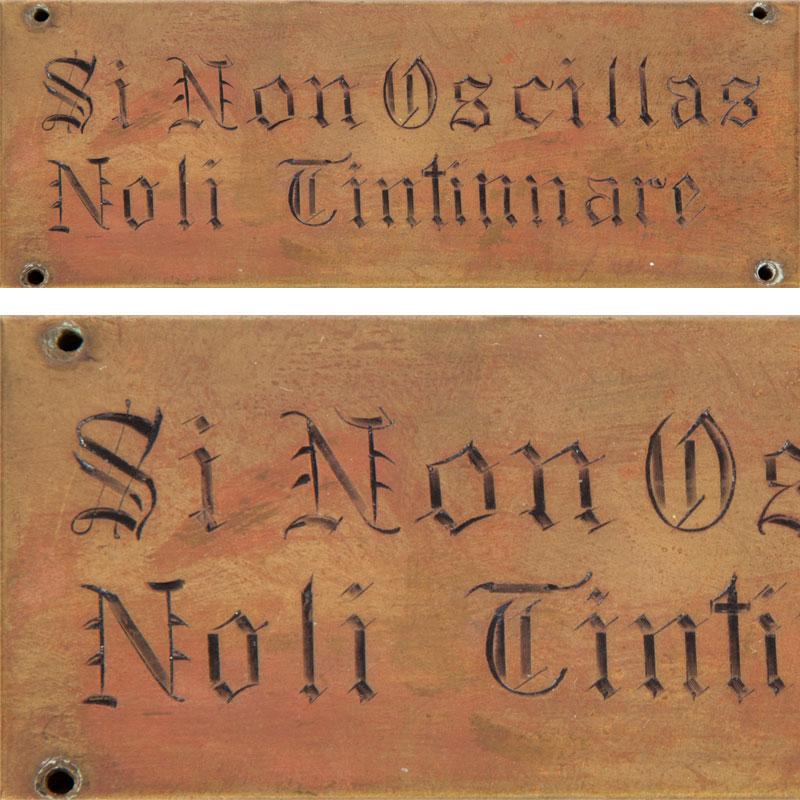 When you look at it, it doesn’t seem like much. It lacks the word “Playboy” and the famous bunny logo, and it’s relatively small, at one and a half inches by four inches. But those who know the Playboy universe know this plate. It greeted visitors to the Chicago Playboy mansion during the 1960s and 1970s with the Latin phrase, “Si Non Oscillas Noli Tintinnare,” which translates to “If You Don’t Swing, Don’t Ring.”

Officials at Julien’s who prepared the sale of Playboy founder Hugh Hefner’s effects estimated the plate at $400 to $600. To their shock and delight, they watched it soar to $51,200, with the saleroom crowd cheering on the bidding after it passed $10,000. Hefner took the sign down after he moved out of the mansion in 1974, and he installed a replica in the Los Angeles Playboy mansion. The Los Angeles sign was in the auction, too, and sold for $1,600 against an estimate of $50 to $100. 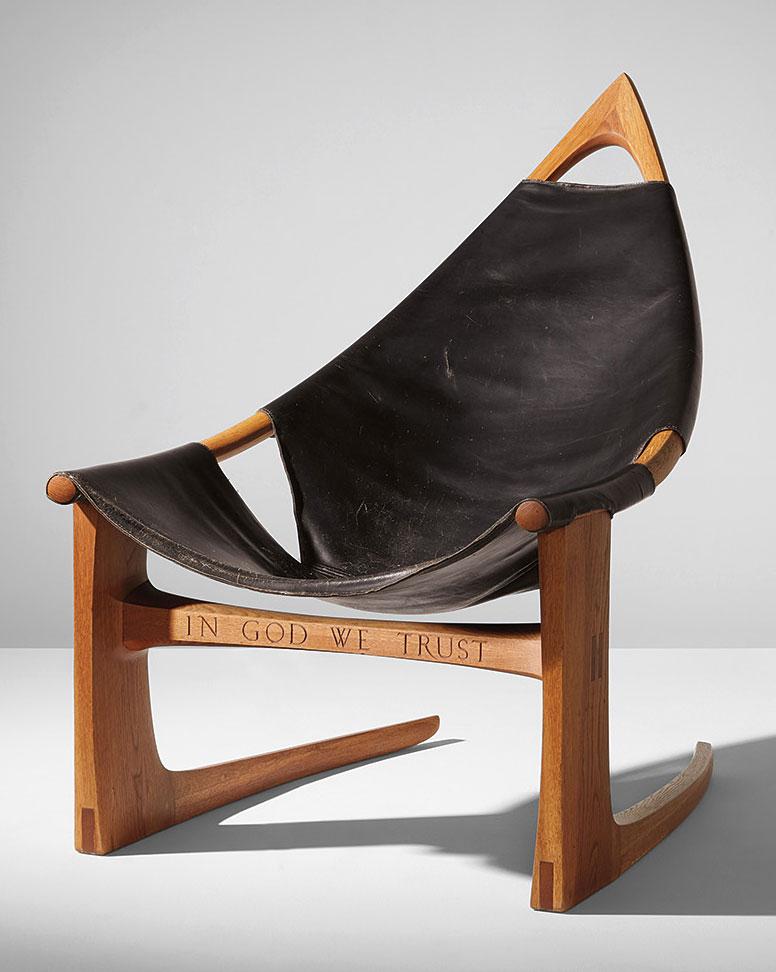 A Throne by Castle

Wendell Castle gleefully and deliberately blurred the line between furniture and sculpture for six decades, and carried on innovating until he died in January 2018. The American artist’s fourteen adopted rules of thumb, which appear at the tail of his biography page on the website of the Friedman Benda gallery, which represented him, includes this edict: “If it’s offbeat or surprising, it’s probably useful.” His In God We Trust chair reflects all three of those qualities. Fashioned by Castle in 1964, the unique oak and leather chair features the phrase on its crossbar, inscribed in a suitably sober font.

The chair displays the mastery of a young-ish (he was 32 in 1964) artisan in full command of his powers. It’s a magnificent collection of lines and curves that converge in the peak of the chair’s back, forming a silhouette that calls to mind the famous Dürer drawing of praying hands. And, befitting a man who emphatically embraced change, it looks fresh enough to have been finished last week. Estimated at $60,000 to $80,000, the chair sold for $75,000.

Photo courtesy of Phillips
About the Author