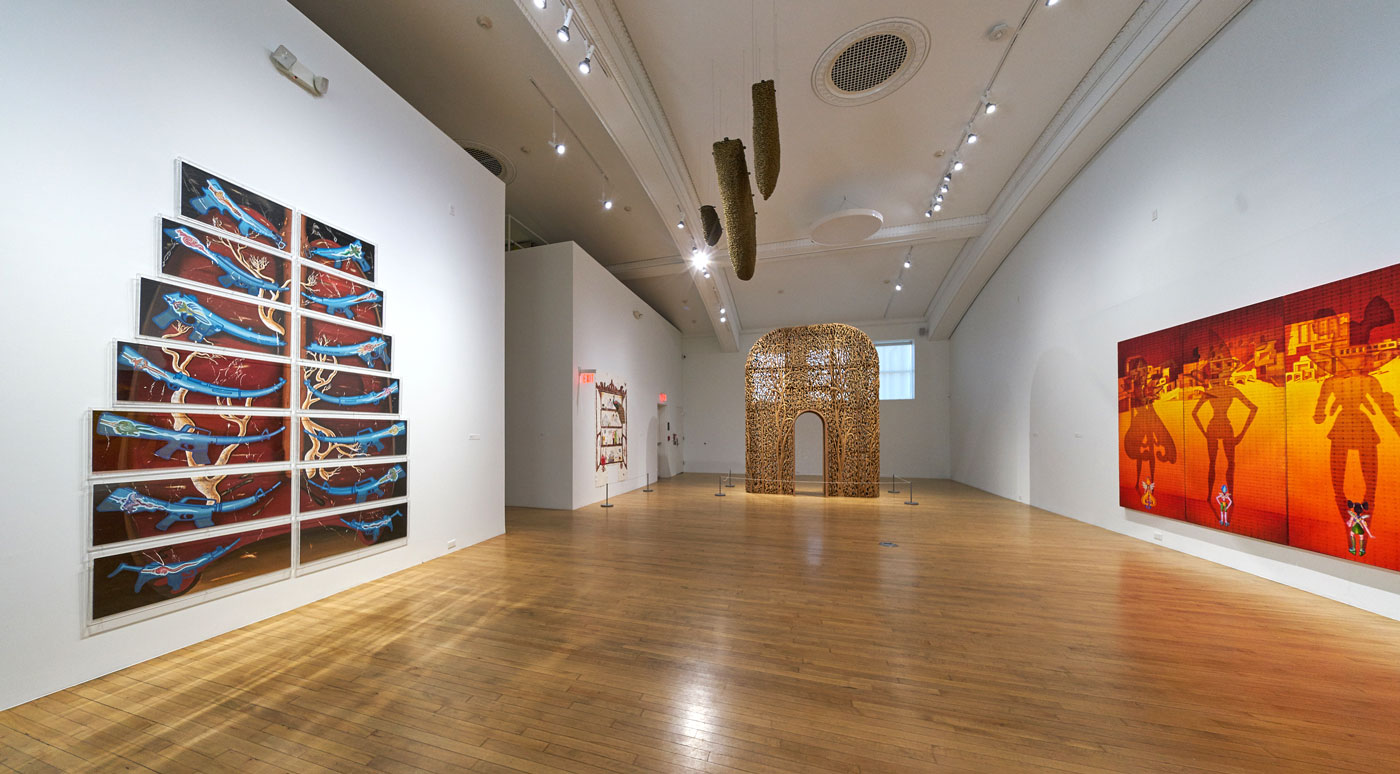 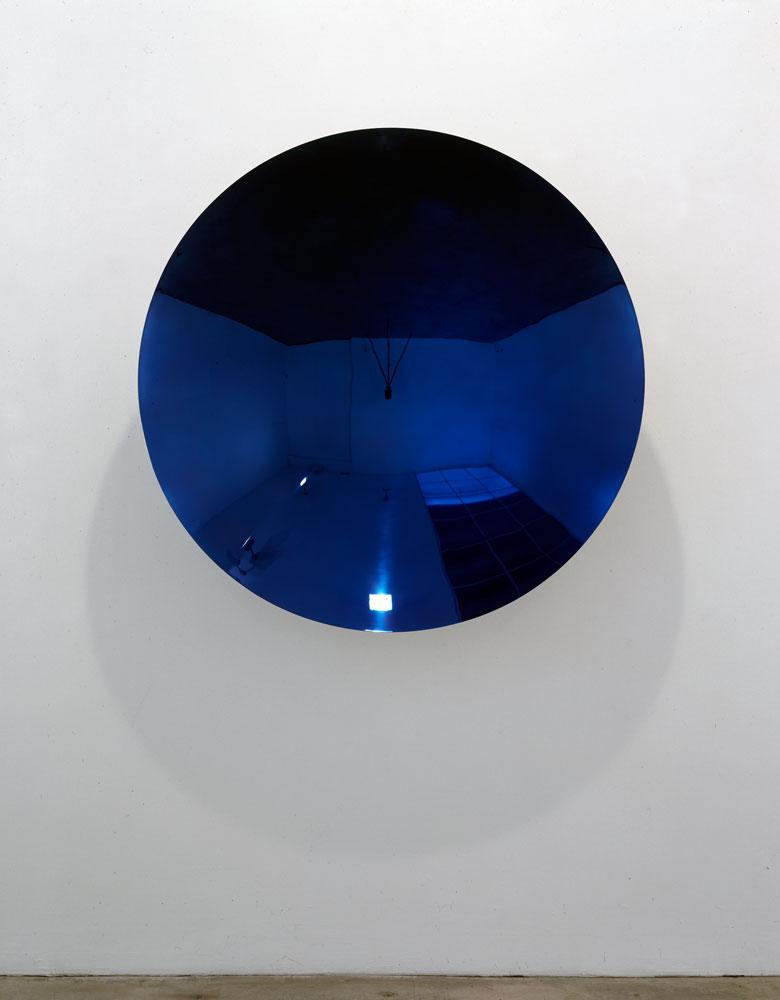 That the two collections can be found in Columbus, Ohio, might seem strange to those unfamiliar with the Midwest capital … But there might be more than place that draws these two collections here.

Call it Kismet. That may be the best way to describe the 2017 Visions of India exhibit at the Pizzuti Collection in Columbus, Ohio.

Ron Pizzuti, a real estate magnate, and his wife Ann, have been art collectors for forty years, amassing in that time more than 2,000 pieces of contemporary art. In 2015, the Pizzutis transformed a 90-year old historical building in Columbus’s Short North Arts District into a three-story public gallery that displays temporary, rotating exhibits of art from their international collection.

“In 2007, Pizzuti met the artist Sudarshan Shetty, and was impressed by his vision of the world,” says Greer Pagano, who serves as chief curator for the Pizzuti Collection. Following that encounter, Pizzuti traveled to India—an experience he describes as “spiritual”—to look deeper into the contemporary art of that country.

At that time, many of the artists Pizzuti collected were unknown. Today, that’s no longer the case. Artists like Bharti Khar, Anish Kapoor, and Subodh Gupta appear regularly in Artprice’s list of Top 500 artists. Some of their work, in addition to the work of 23 other artists, made up the 44 diverse pieces, ranging from sculpture to paintings to mixed media, that comprised the Visions of India exhibit. 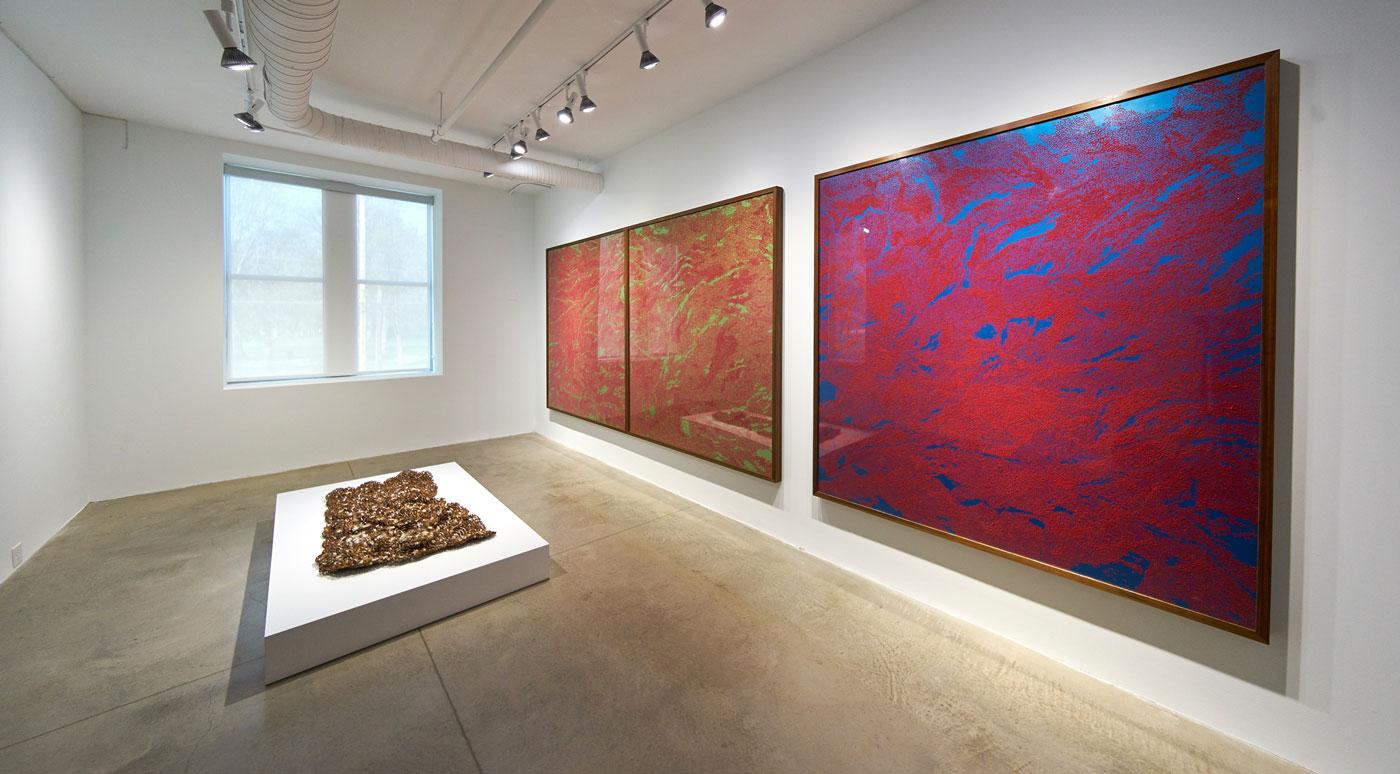 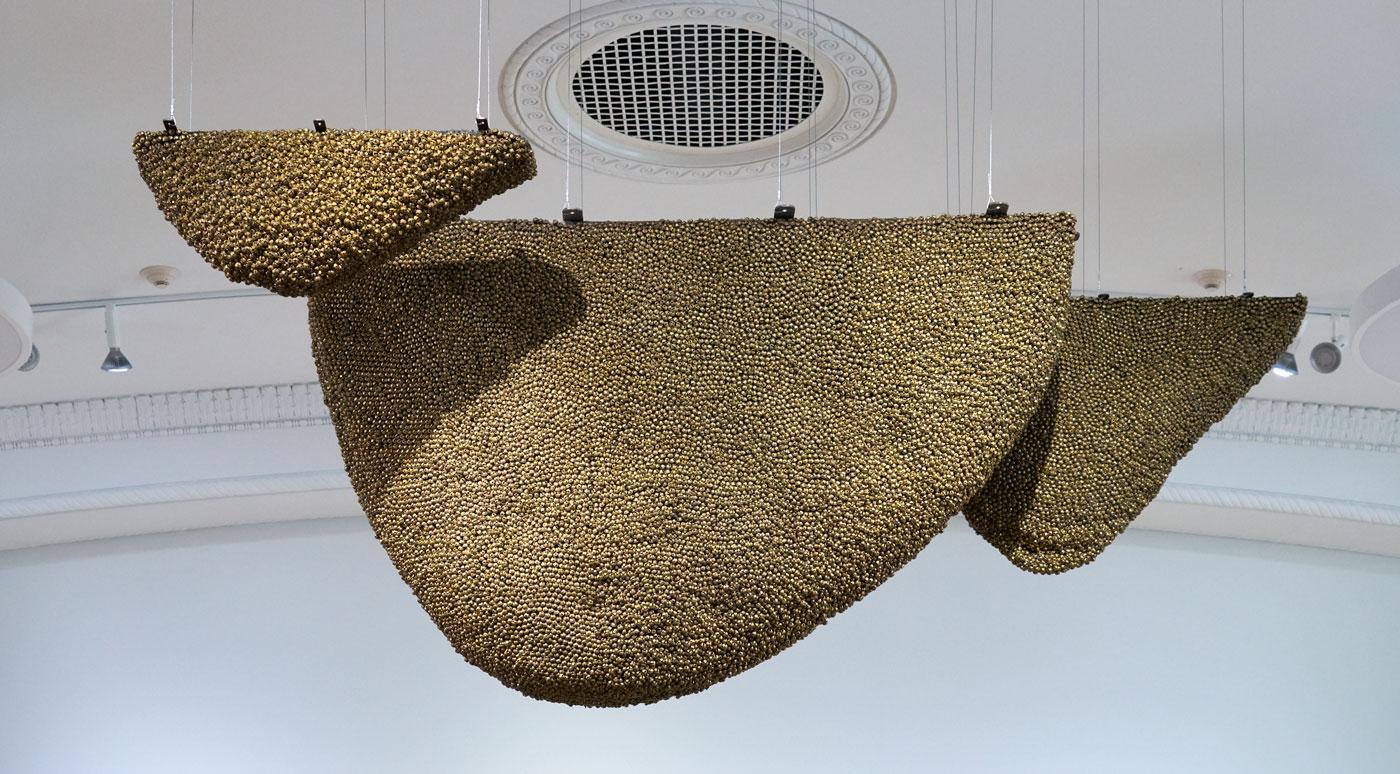 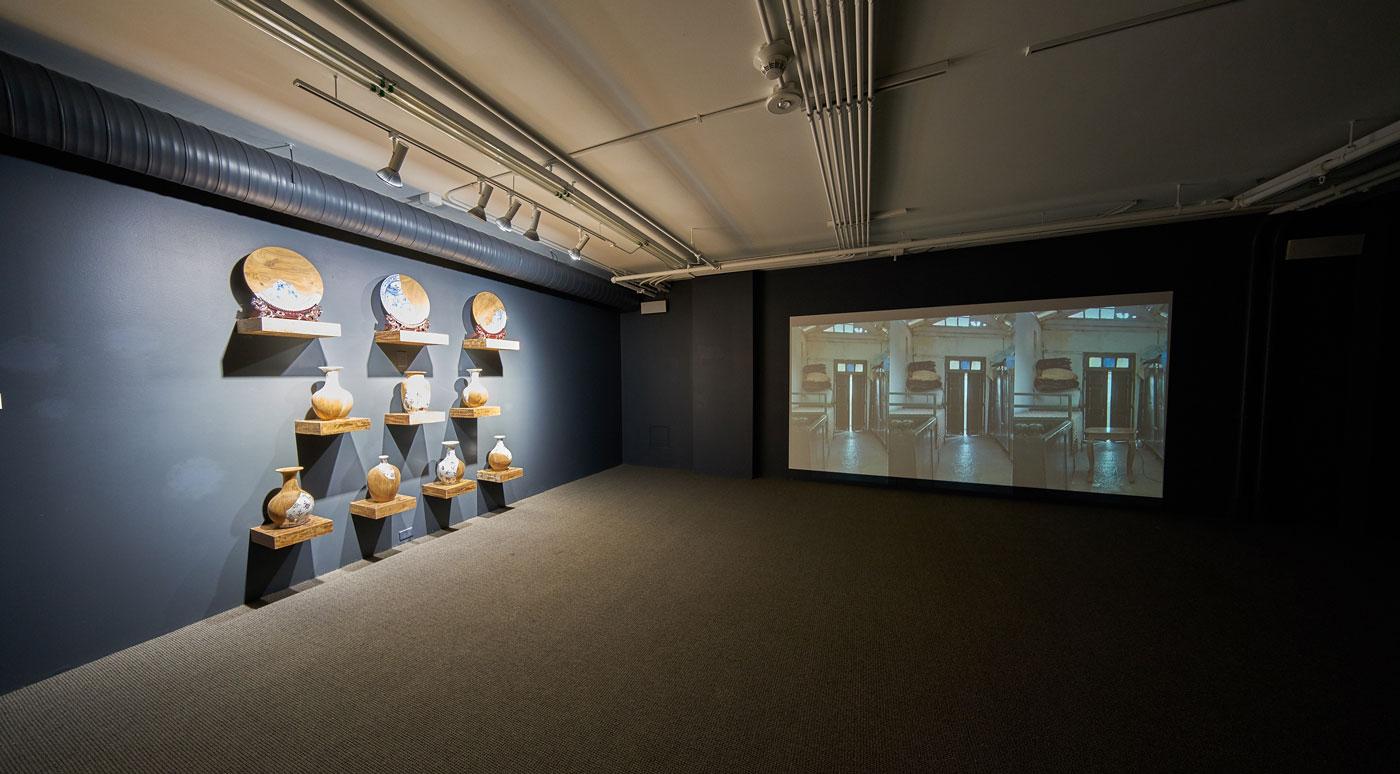 Running concurrently with the exhibit was The Progressive Master, a survey of the work of Francis Newton Souza, an artist and founder of The Progressive Artists’ Group, a collective which, following India’s independence in 1947, sought to bring art into the modern world by confronting environmental, gender, and political issues. The thirty works on display in The Progressive Master are drawn entirely from the collection of Columbus engineering consultant Vikram Rajadhyaksha. Although The Progressive Master displayed earlier works than the Visions of India exhibit (from the 1940s to the 1990s), Pagano says it was not a deliberate effort to show the progression of contemporary Indian art from its beginnings to modern times. Nor, she says, was either exhibit meant to stand as a comprehensive survey of Indian art. Visions of India reflects only the taste of its collectors, but considering the breadth and diversity of the collection, it’s a good place to start.

A visitor who is short on time could pick and choose his or her way through both exhibits and not be disappointed, but Pagano recommended some highlights.

An Untitled piece by Subodh Gupta, referred to as “The Sushi Belt,” is one of her recommendations. In this work, a 23-foot-long motorized sushi restaurant conveyor belt is “stacked to the brim” with copper and tin tiffin boxes—the traditional lunchbox of India—forming precariously tall towers in a sort of abstract cityscape. When the belt is set into motion, the towers sway in a hypnotic, dizzying fashion. “The piece connects to all of us through culinary and historical aspects,” says Pagano. “Food, once served on old dinner plates, now moves onto shiny new plates. That they are conveyed on the belt shows a move forward to modern, more industrial times, and the parade of plates may also offer a subtle reference to India’s resistance marchers.”

For All That We Lose by Sudarshan Shetty was another highlight—a twelve-foot-tall hollow structure resembling an elaborately carved gateway. The piece is made of reclaimed teakwood, often all that’s left of India’s historic buildings as the country races to build new ones. Two small archways form a passage through the piece, while above, a sword swings slowly overhead, like a pendulum, adding an element of risk to the immediate impression of beauty, or maybe representing India’s past, slipping away.

Another work by Shetty, Untitled, resembles a woven rug but is actually an intricately carved piece of wood. “The piece, like many in the collection, invites you to look closer,” says Pagano.

Anish Kapoor, one of India’s foremost contemporary artists, not only invites viewers to take a closer look at his piece, Untitled (2000)—he pulls them into his art. Kapoor’s sometimes colorful geometric sculptures are made with reflective surfaces that show off their surroundings. The surface of the bright blue disc that sits inside the Pizzuti gallery pulls the reflections of those standing nearby into the work, allowing the viewer to both observe and interact with the piece. Anyone who has been to Chicago’s Millennium Park and stood near Kapoor’s Cloudgate, sometimes called “The Bean” because of its shape, will understand the experience.

The work of New Delhi artist Bharti Kher also invites viewers in for a closer look. Her triptych Landscape appears at first to be an abstract painting composed of type. But the medium Kher uses are bindis—the felt stickers that Indian women traditionally place on their foreheads as a sign of marriage. “Today, bindis are used in India by everyone, and they have transformed from dots to different shapes and colors,” says Pagano. Kher’s work, using arrow-shaped bindis on a colored board, is a statement on the cosmetic culture, history, and recent commoditization of the bindi.

Another New Delhi artist, Vibha Galhorta, creates work that addresses environmental issues and re-zoning of land. Her Beehive sculpture is made of found objects and speaks to the world-wide danger of bee colony collapse. “The piece communicates the importance of bees,” says Pagano, “and wonders what humans would have to do to replace the work they do for us.”

As already noted, all the works in the Visions of India exhibit were collected over just the last ten years. The Progressive Master exhibit, Rajadhyaksha’s collection of Souza’s work, has been collected over a lifetime. That the two collections can be found in Columbus, Ohio, might seem strange to those unfamiliar with the Midwest capital, but, if nothing else, such a happy pairing, like the exhibit itself, invited those outside the city to step inside for a closer look. But there might be more than place that draws these two collections here. Some might call it Kismet.