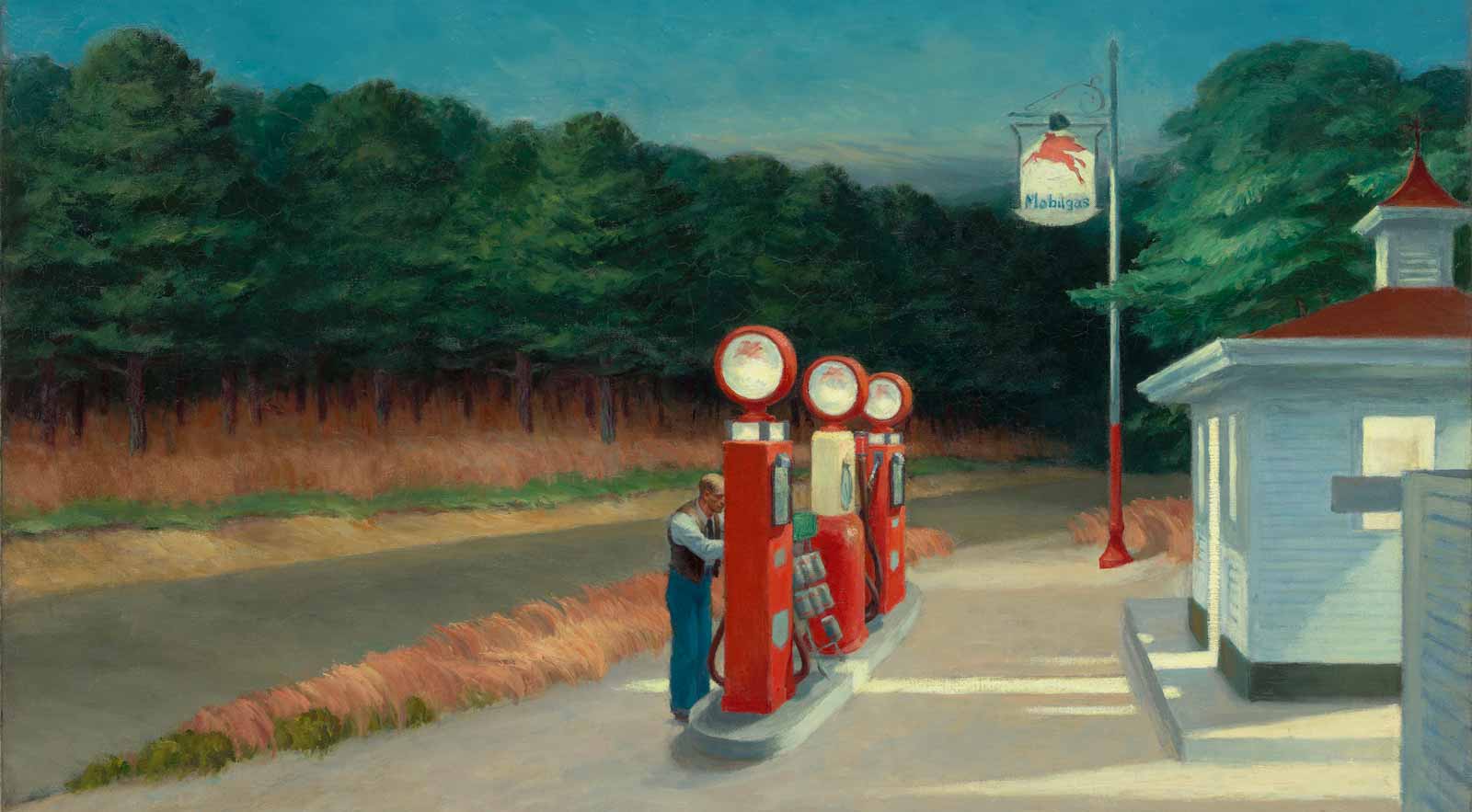 Hopper’s paintings of empty coastlines, limitless plains, and rolling hills embody the vastness and psychological complexity of the American landscape. 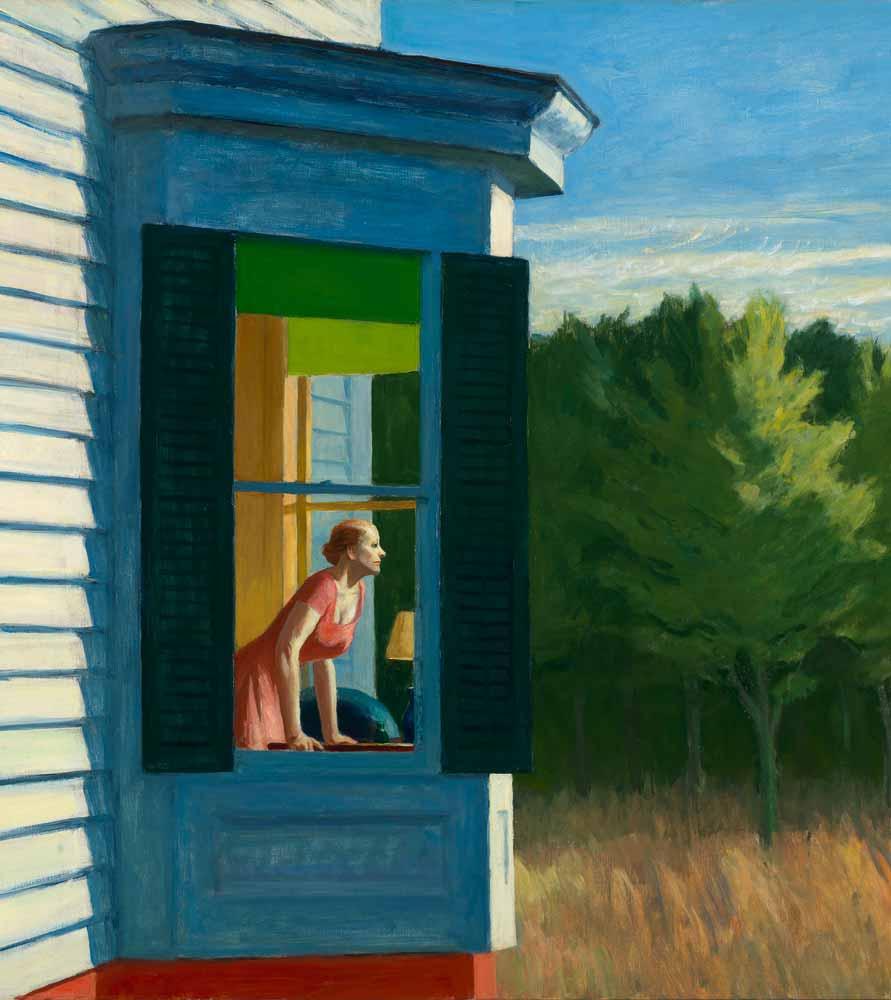 “As a commercial artist, Hopper was at the epicentre of this commodity-centered, modern political economy, in which consumption increasingly defined American national identity.”

“You are asking me to do something which is perhaps as difficult to do as painting is,” Edward Hopper wrote to curator Charles H. Sawyer in October 1939, “that is, to explain painting with words.” Hopper–who spent two decades supporting himself as a commercial illustrator and went years without selling a painting–had finally attracted attention for his austere, ambiguous pictures of late night diners, solitary office workers, and lonely movie-goers. People like Sawyer wanted to know: what did his paintings really mean?

The artist was markedly tight-lipped throughout his career, preferring for his work to speak for itself. But for those who think of Hopper as the consummate painter of the modern metropolis, what he revealed in his essay for his 1933 retrospective at The Museum of Modern Art (MoMA) in New York may come as a surprise: “My aim in painting has always been the most exact transcription possible of my most intimate impressions of nature.”

Nature, and the landscape it inhabits, are the subjects of Edward Hopper, a new exhibition at the Fondation Beyeler in Reihen, Switzerland. While Hopper may be best known for iconic city scenes like Nighthawks (1942) and Chop Suey (1929)–which sold at auction in 2018 for a record $92 million–he spent much of his life away from the hustle and bustle of New York. Beyond seasonal stays in rural Maine and Massachusetts, Hopper made many cross-country journeys and trips to Mexico by train and car, always working along the way. His paintings of empty coastlines, limitless plains, and rolling hills embody the vastness and psychological complexity of the American landscape. Hopper’s paintings show a country of endless movement, banality, and decay. 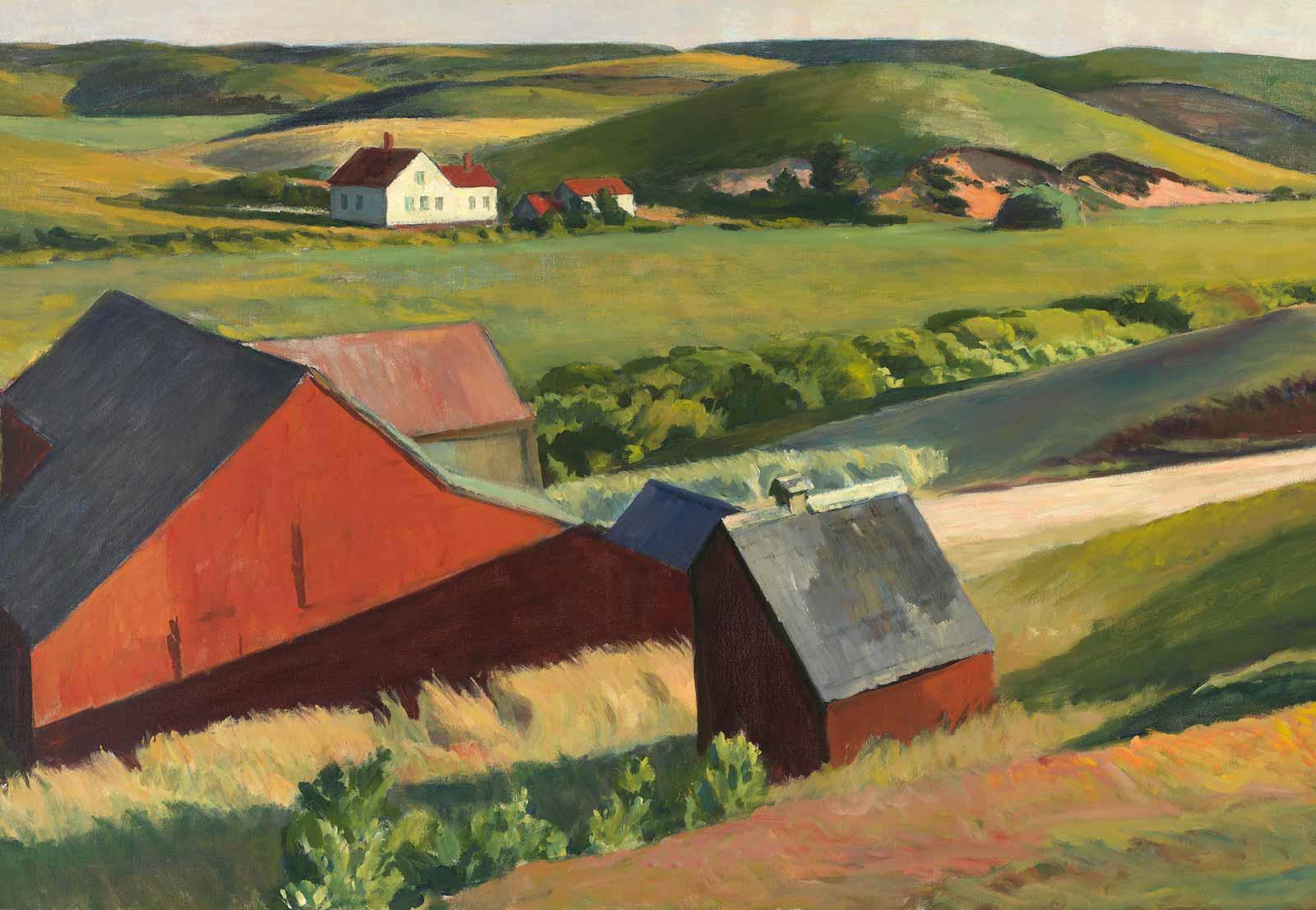 Hopper rejected the formulas and rules that governed landscape painting before his time. While the Hudson River School and its European predecessors saw land as a well-composed, static entity, Hopper’s landscapes suggest that not everything has been neatly captured in view. “Landscape is an image of nature that doesn’t change, but nature is changing,” the exhibition’s curator Ulf Küster recently said, mentioning the Australian bushfires and the threat of climate change. “Hopper makes changing nature visible. He shows landscape as part of something bigger, something that is perhaps beyond our control.”

Inside his idiosyncratically-cropped canvasses, train tracks and telephone poles chop Hopper’s vistas into asymmetrical fragments, and rooftops and roads cut spartan horizon lines. The artist developed his innovative approach to landscape through etching, a technique he learned in 1915. Although Hopper made more than fifty prints and won prizes for these works, he effectively stopped making etchings in 1925. Hopper wanted to be known as a painter, not a printmaker.

Despite the fact that his first exhibitions and even his first retrospective featured mostly watercolors, Hopper’s works on paper are relatively unknown today. He never exhibited his drawings during his lifetime, and told MoMA Director Alfred Barr that he didn’t care much for them. But Hopper’s loose, fluid sketches–which were created ‘en plein-air’ during his travels, or “from the fact” as the artist called it–are a revelation, and a stark contrast to the dense, laborious oil paintings he is now best known for. His watercolours are also exceptionally light, unburdened by underpainting or heavy shadows. Fortunately, examples of Hopper’s landscape-based etchings, drawings, and watercolors are a significant part of the Fondation Beyeler’s display. 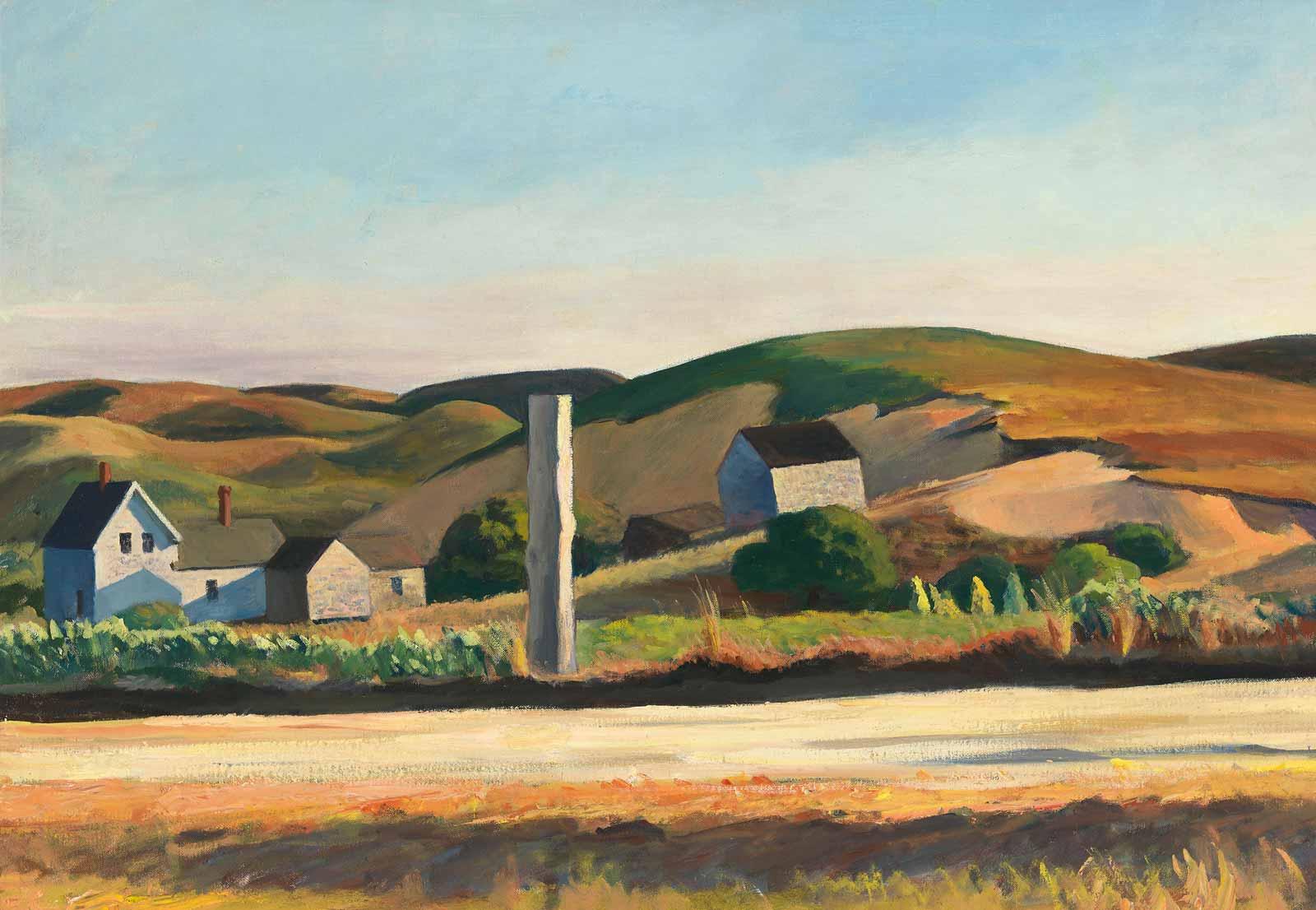 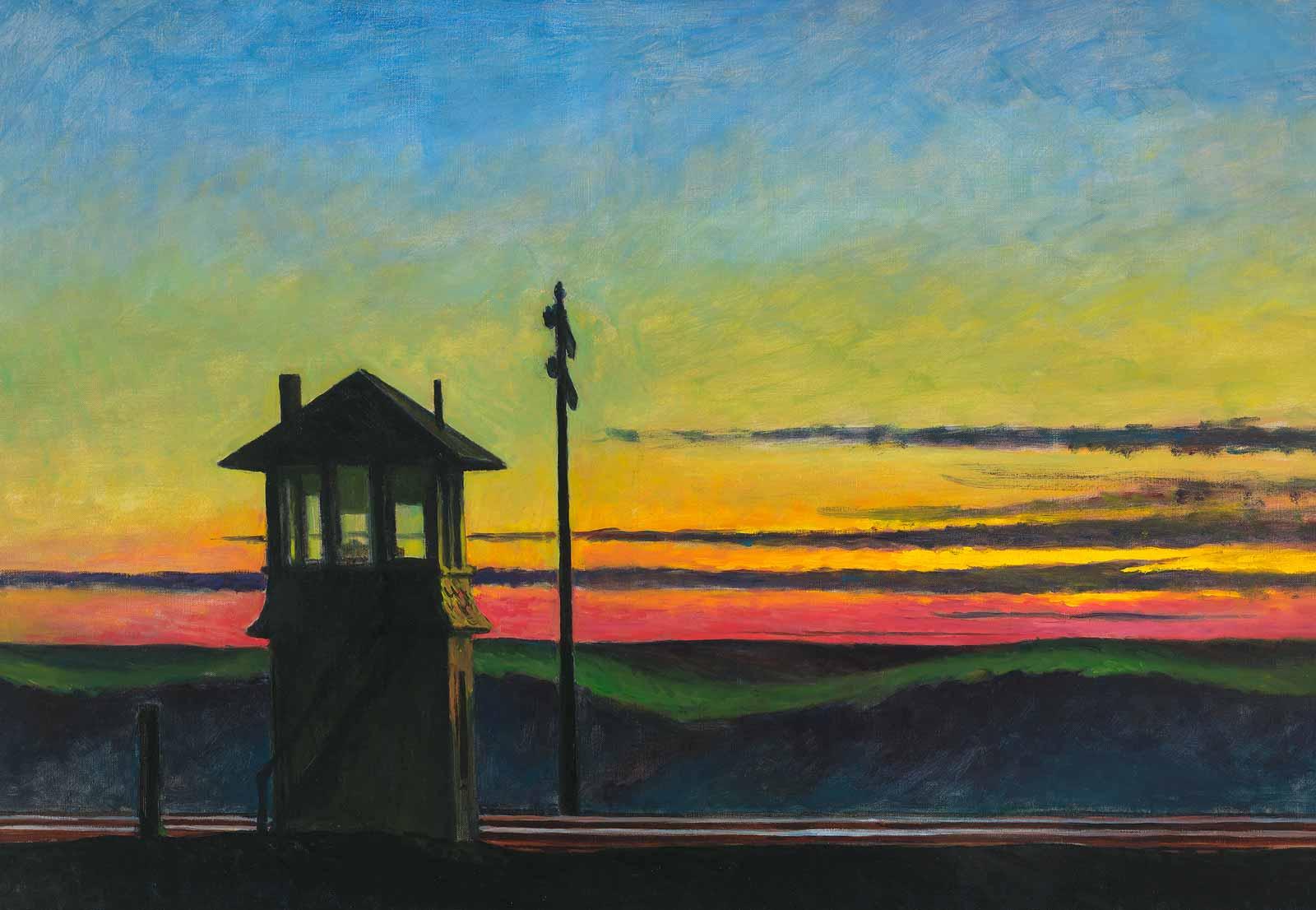 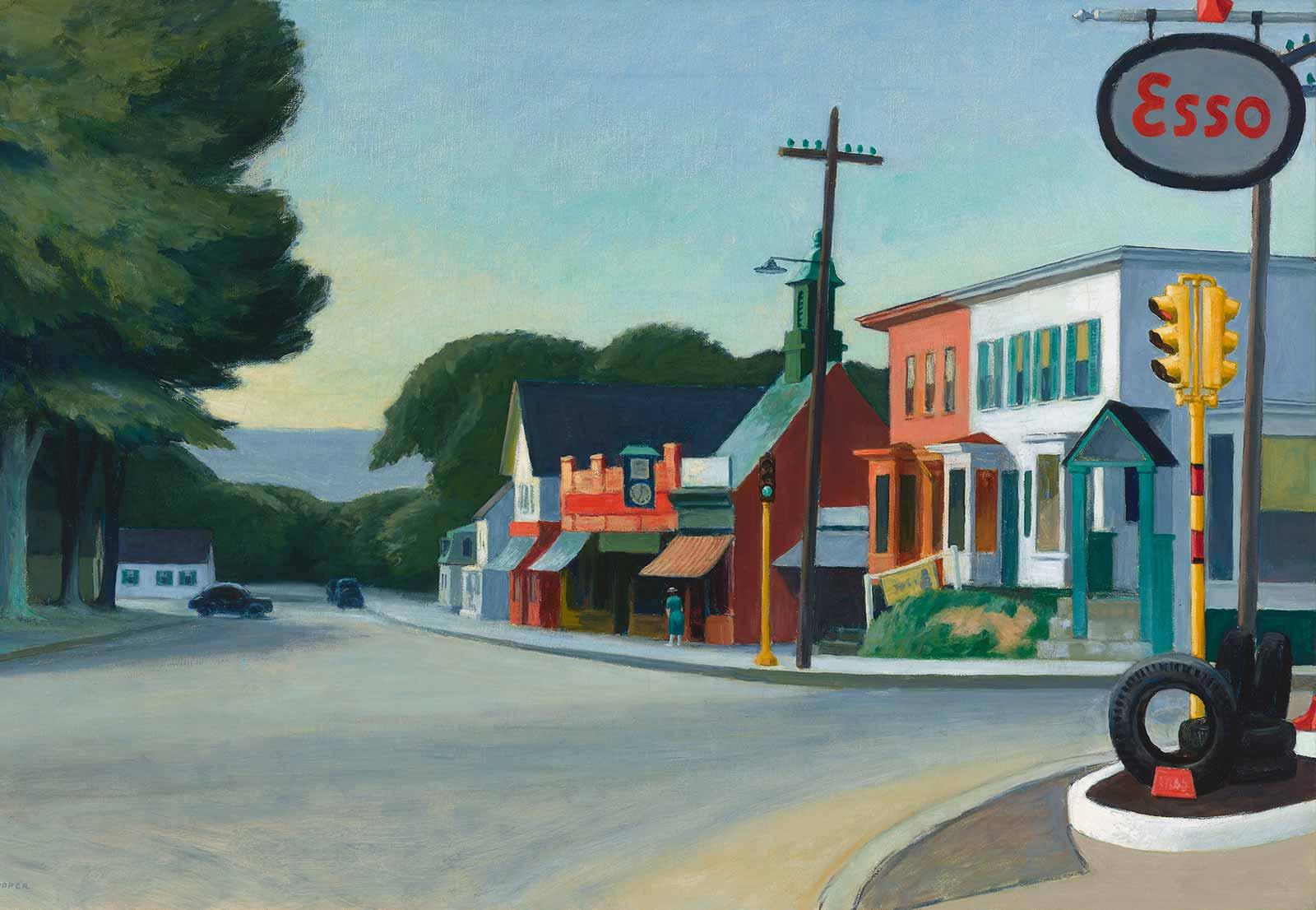 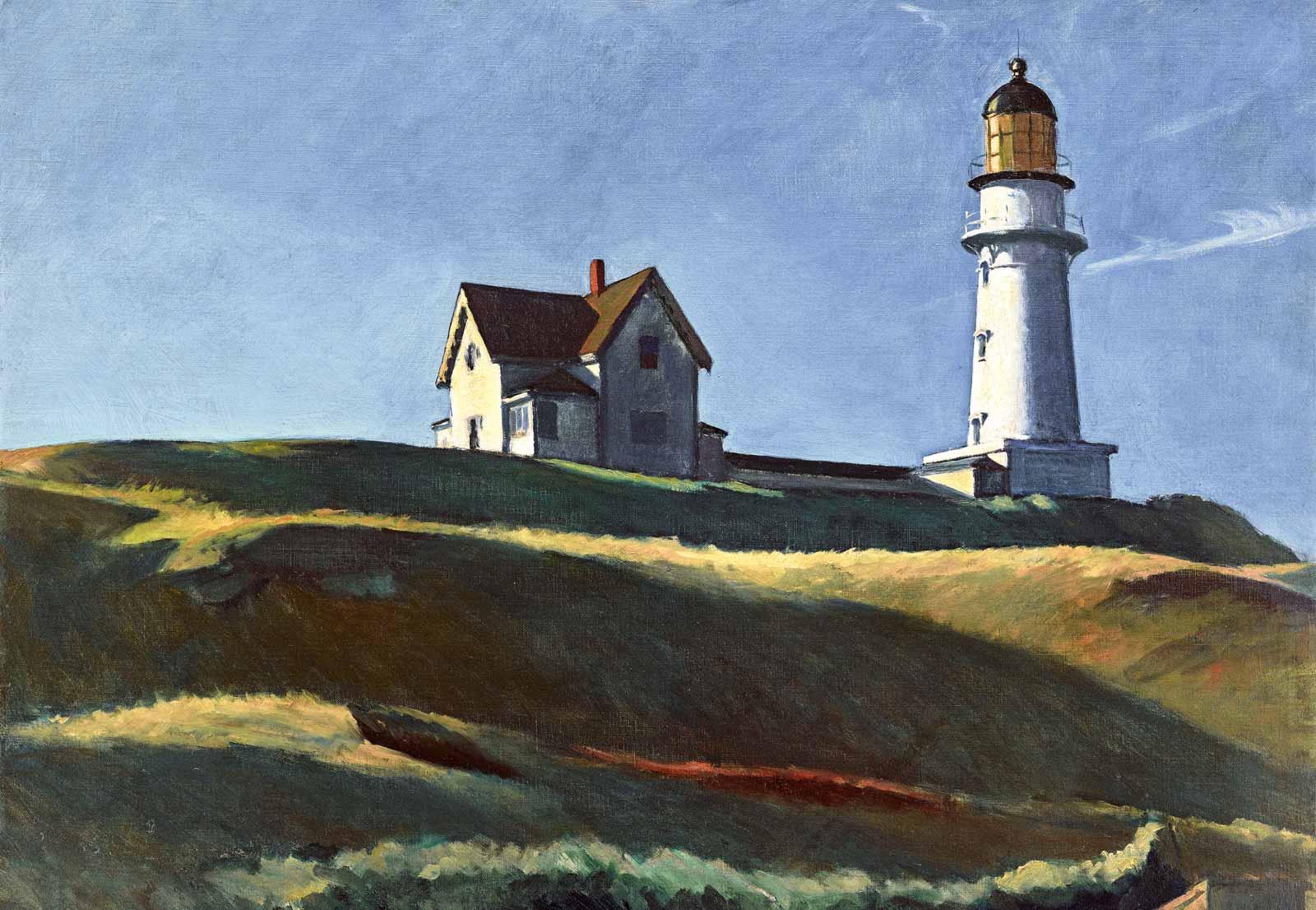 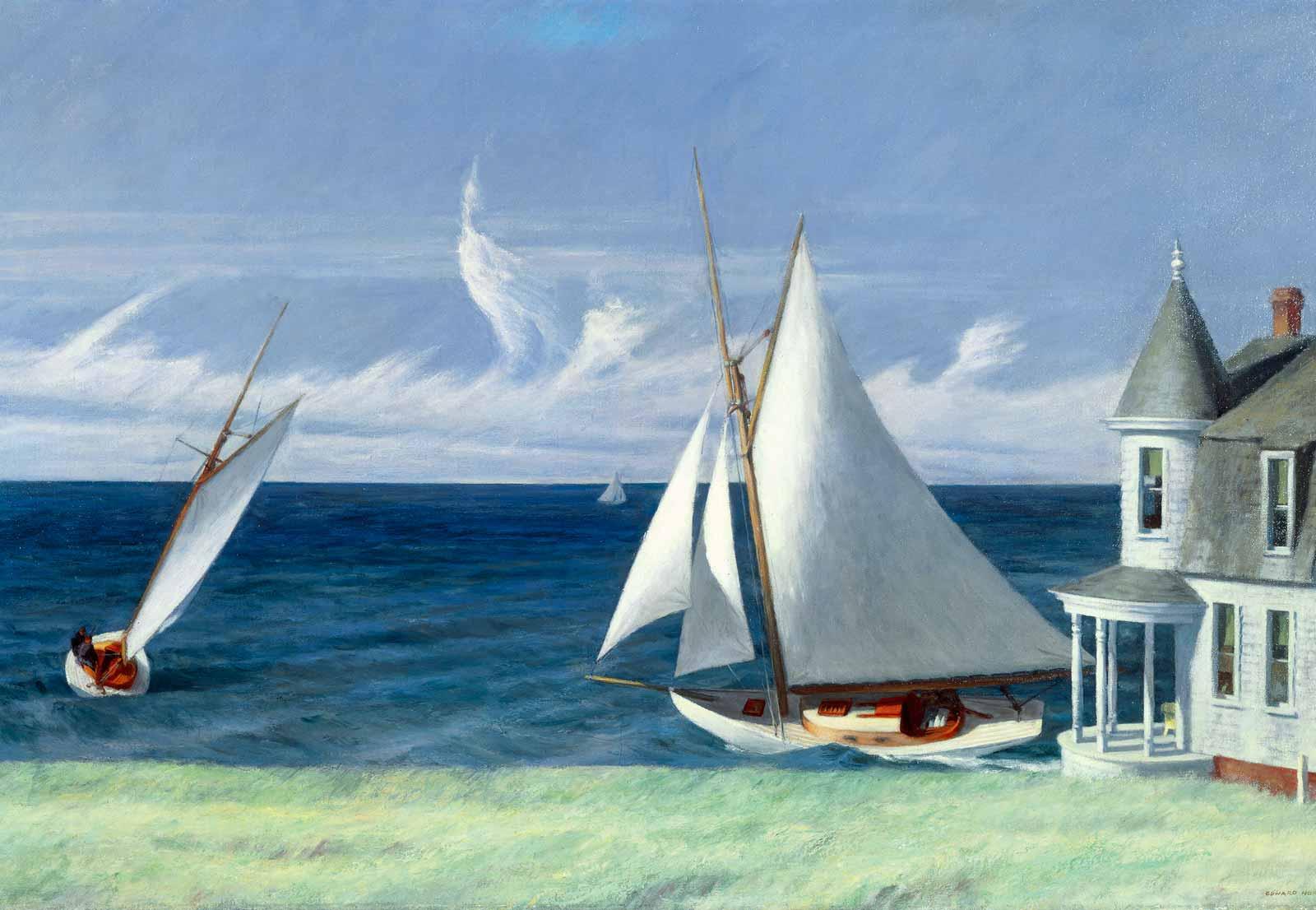 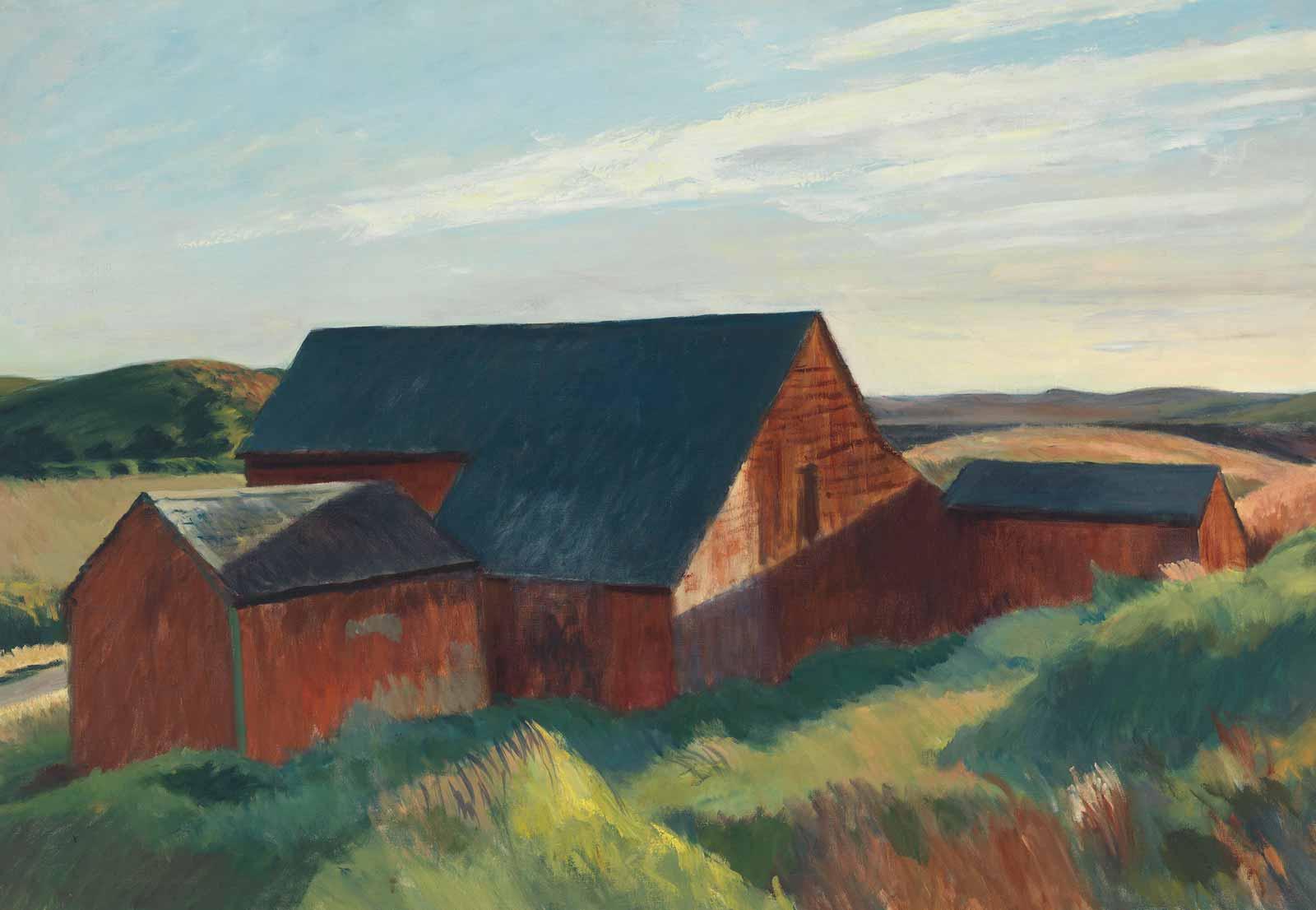 Trains, cars, and boats are signs of the unstoppable machine of modernity. But Hopper’s canvases are also populated by stark shadows and haunting Victorian-era mansions, which were already out of style by the time he painted them. “As a commercial artist, Hopper was at the epicentre of this commodity-centered, modern political economy,” art scholar Erika Doss writes, “in which consumption increasingly defined American national identity.” Hopper’s long illustration career was based on stoking consumer appetites, so he knew first hand the darker side of progress. Indeed, Hopper’s 1928 article about Charles Burchfield’s work lauded the painter’s emphasis on “the sad desolation of our suburban landscape.”

A discussion of Hopper’s work cannot omit a mention of Josephine Nivison Hopper, the artist’s wife and a painter in her own right. Nivison was Hopper’s studio mate, record keeper, and travel companion. The couple was inseparable but tempestuous; her diaries describe harrowing disputes that sometimes came to physical violence. Nivison was the sole model for Hopper’s’ female figures, morphing from theatre usher to hotel guest to burlesque dancer. Often portrayed reading, gazing out of windows, or otherwise lost in their own interior worlds, Hopper’s women appear heavy and immobile, with gazes that do not rise to meet the viewer.

Jo in Wyoming (1946) is a rare portrait of Nivison herself. Painted with a curious, cinematic framing from the backseat of the couple’s car, Hopper presents two landscapes here: far-off mountains framed by the car windows, and those same mountains depicted in his wife’s front seat painting-in-progress. The Hoppers purchased their first automobile in 1927, and took many of these working road trips. The piece gives crucial clues about Hopper’s method away from the studio, and contains a rare hint of intimacy: he paints Nivison’s mouth slightly open, as if she is speaking to her husband or simply lost in concentration. 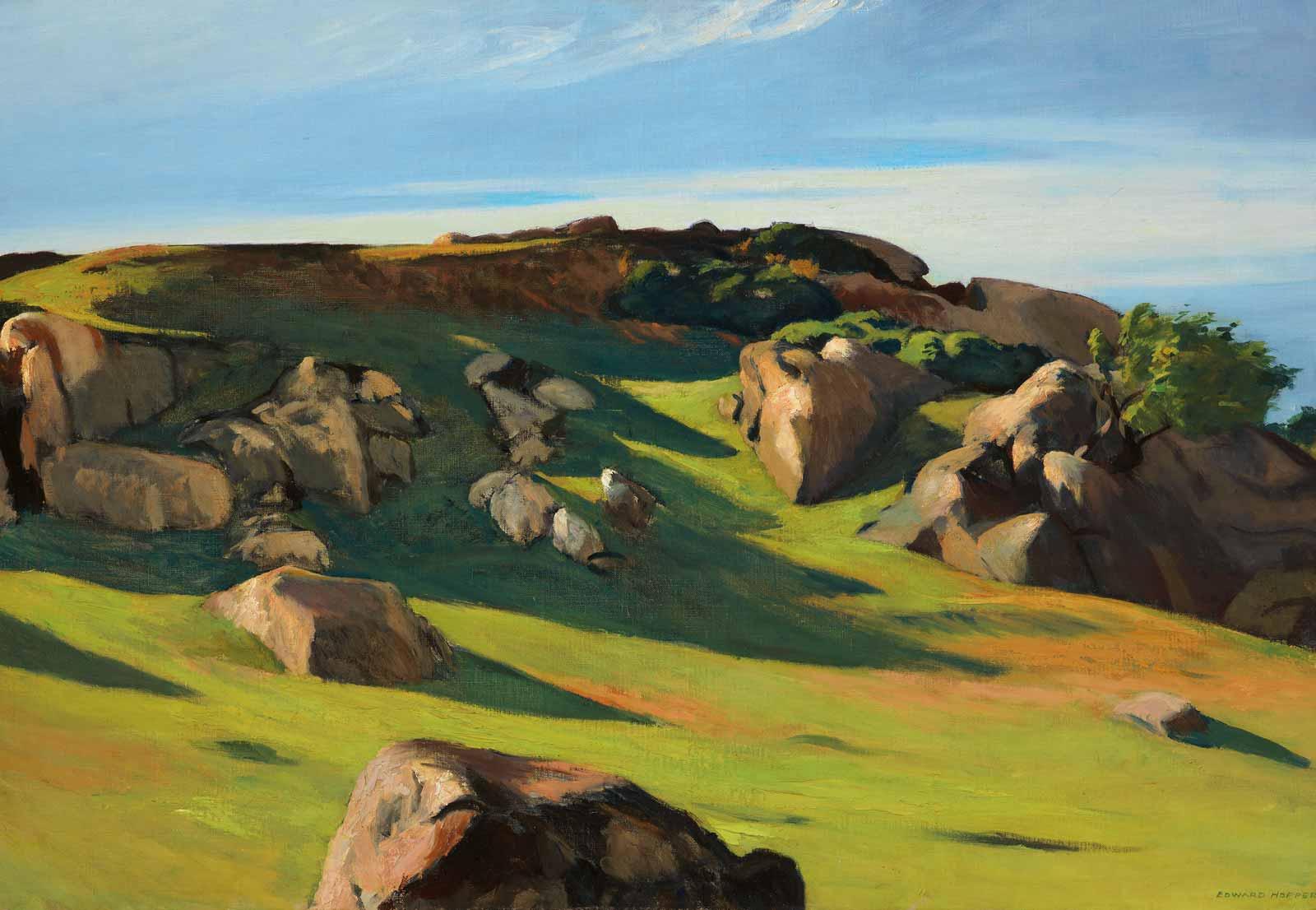 Four years later, Nivison modelled for Cape Cod Morning (1950). Here, a woman in a rose-colored dress leans forward to look out her window, gripping a tabletop as if to stop herself from jumping. Perhaps the anxious expectation that so many of Hopper’s female figures exude reflect his wife’s frustration with her own decommissioned career. Before her marriage to Hopper in 1924, Nivison had exhibited to critical acclaim alongside the likes of Picasso, Modigliani, and Man Ray. It was she who first recommended Hopper to the Brooklyn Museum at a time when his career was still dormant. When its curators bought one of his paintings, it was only the second he’d sold in ten years. Nivison bequeathed over 3,000 of her and Hopper’s works to the Whitney Museum when she died in 1968. They held onto his work, but threw most of hers away.

“Hopper created an image of America as an enormously big and sometimes melancholic space,” Küster told me. In preparation for the exhibition, the curator traveled the US in search of Hopper’s paintings, often stopping at smaller museums that held one or two of the painter’s works in their collections. He experienced Hopper’s highways, railroads, and big sky first hand, citing “the feeling that you can’t possibly have an overview of the bigness of this country” as part of the painter’s legacy. Hopper’s view of America has such an iconic appeal that President Barack Obama displayed two of his paintings at the Oval Office. Cobb’s Barns, South Truro (1930–1933) and Burly Cobb’s House, South Truro (1930–1933) both depict an old farmhouse in the hills of Cape Cod, and both are on display at the Fondation Beyeler. From small towns to the White House, America sees itself in Hopper.

But the painter’s view of the landscape was mostly turned inwards. As Hopper noted in his 1933 essay, he wasn’t interested in making a true-to-life record of the places that he’d experienced, but rather in capturing his impressions of the landscapes around him. As Küster notes, “Regardless of how recognizable and realistic, indeed even how naturalistic the respective painting is, it is always about Hopper’s very personal view of things; it is about him.” Or as Hopper put it to the critic Brian O’Doherty, “I’m after ME.”

Editor’s note: The Foundation Beyeler provided funding for the author to visit this exhibition.