Jewelry and Wearable Art Sold at Auction
January 2018
By Ettagale Blauer
Extraordinary jewelery and wearable art recently sold at auction
Christie’s Images
Art & Object is pleased to present jewelry and other wearable art recently sold at auction. Since the beginning of time, jewelry has proven to be a medium of expression that defines our tastes, our resources, and our sensibilities.  Jewelry extends into decorative arts and has become a defining statement of culture.  Our column is presented by Ettagale Blauer, author and authority on jewelry design. 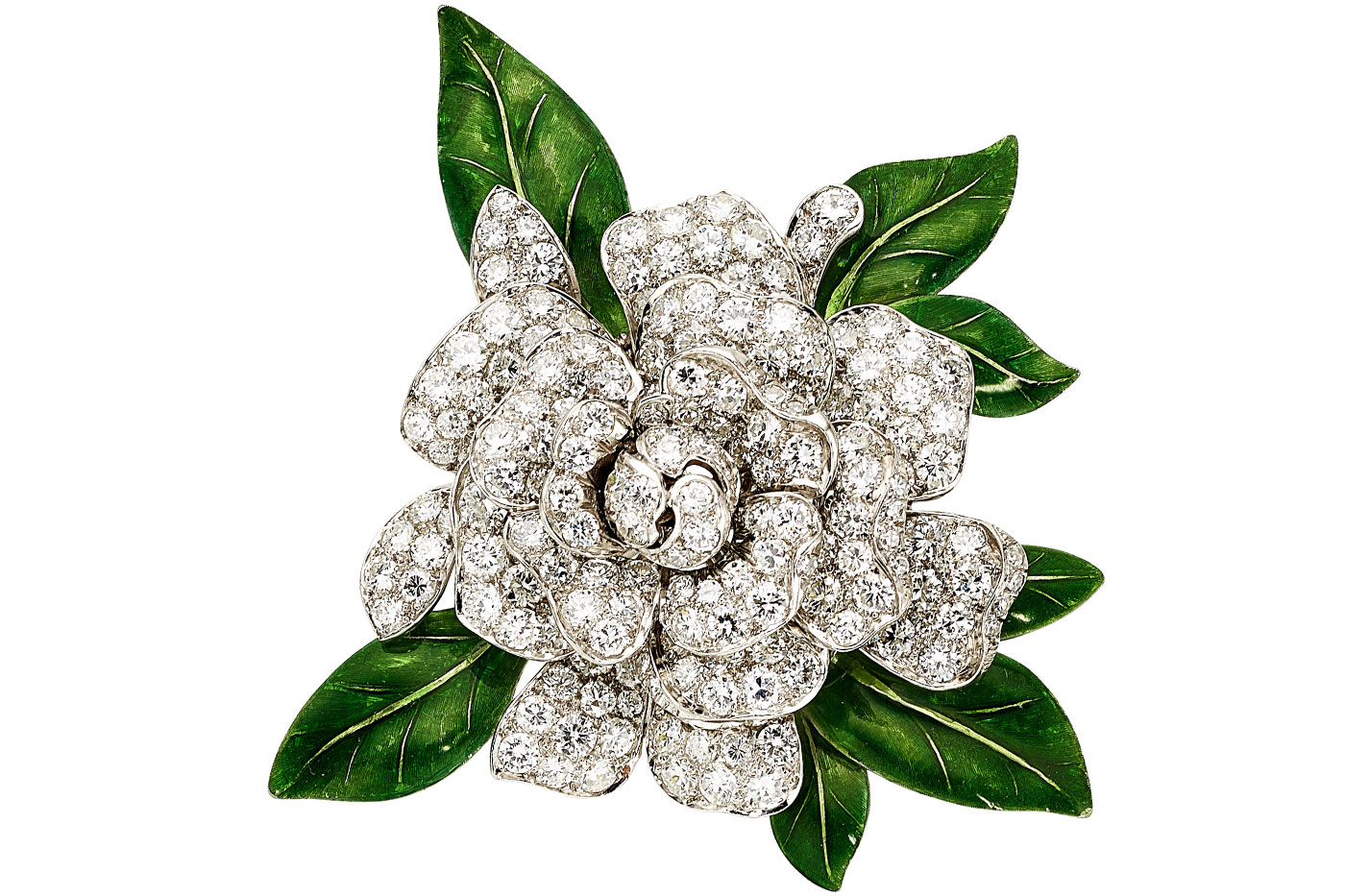 Scent of a gardenia

Plucked from a magical garden, this diamond and green enamel gardenia brooch by Oscar Heyman Bros. exquisitely captures the exotic allure of a gardenia. The articulated petals, set with a total of 6.20 carats of round diamonds, rise up in tiers above the leaves that are fashioned from mottled shades of green enamel, all of it set in platinum. Oscar Heyman is known for its floral brooches, each one an individual work of the finest artistry and craftsmanship, hand made in its New York workshops since 1912. For decades, the firm was known as the anonymous “jeweler’s jeweler” because it signed its pieces with the name of the retailers who sold them. As word spread among connoisseurs that the finest pieces were actually made by Oscar Heyman Bros., the family decided to step forward and proudly claim its rightful heritage and name.

Third-generation family member Tom Heyman entranced those who came to a special pre-sale viewing party with his detailed description of the care and precision with which an Oscar Heyman piece is made. Each element is designed and made to nestle next to and above its neighbors. The gently arched enamel leaves were shaped to both enhance and form the underpinning of the petals, set with more than 100 full-cut diamonds. The brilliant sparkle of the high quality diamonds contrasts with the brilliant green of the leaves, inspired by nature. The brooch is as three-dimensional as the flower that it emulates. It attracted hundreds of views online before it was sold for $12,500. 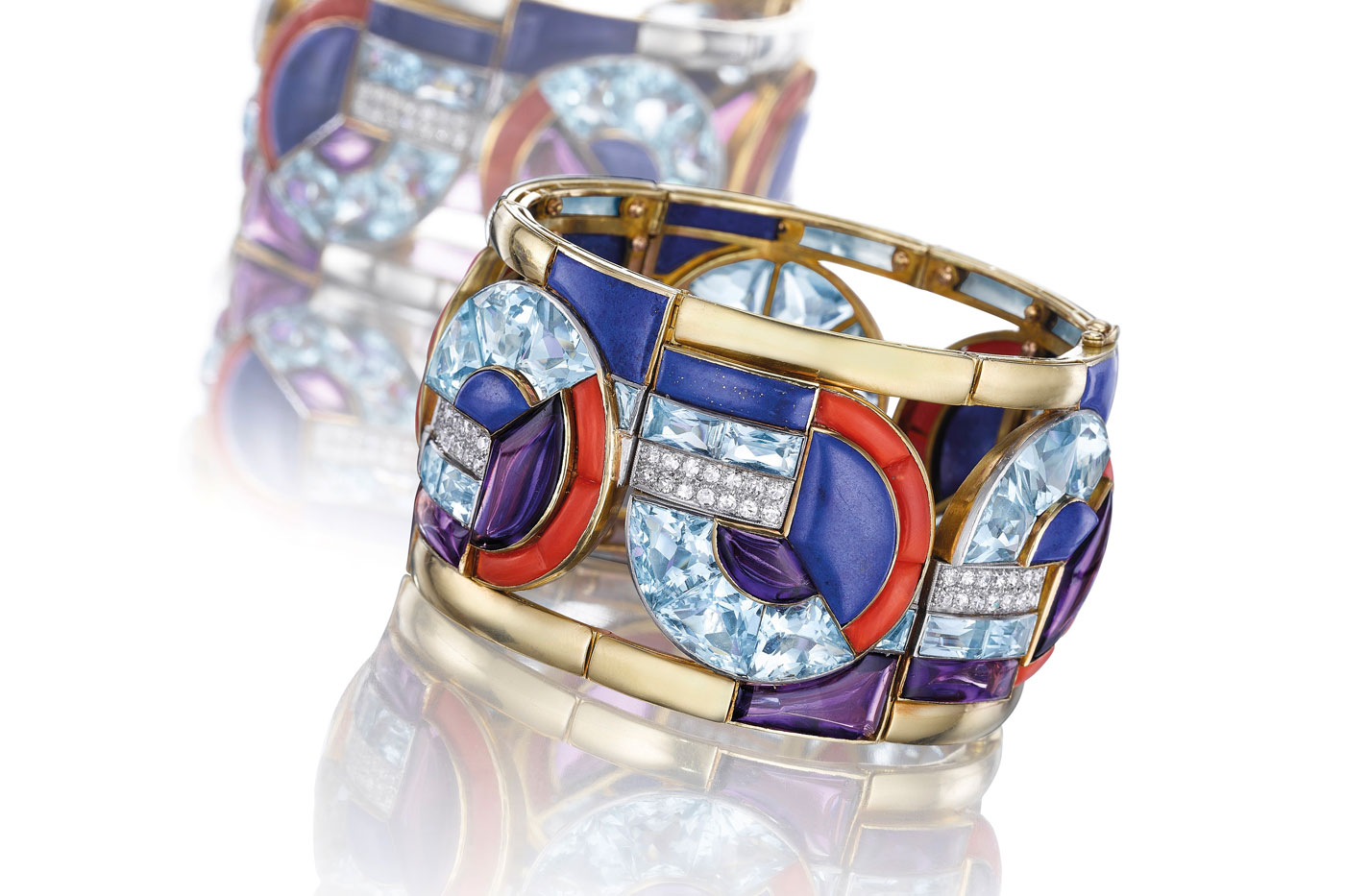 “It’s like wearing the Empire State Building on your wrist,” said Rahul Kadakia, international head of jewelry for Christie’s, during the pre-sale viewing of the Art Deco bracelet designed by Georges Fouquet and A.M. Cassandre. His reference to one of the classic examples of Art Deco design evokes the underpinnings of the period as seen in this bracelet in particular. This masterpiece of design and craft was one of a collection of jewels the two men created together for the Paris Exposition of 1925, known as L’Exposition des Arts Decoratifs, or Art Deco. The fair was intended to bring together the finest examples of that era across the design spectrum.

Cassandre was known for posters that captured the essence of the new “machine age.” Their bold colors and graphics that seemed to speed right out of the picture frame expressed the new art form in two dimensions. Georges Fouquet was head of his father’s jewelry firm from the turn of the 20th century. He and his son Jean moved the firm’s design sensibility from the sensuous forms of Art Nouveau to the jazzy geometrics of Art Deco. When the fair was in the planning stage, Fouquet was named head of its jewelry section.

This bracelet is the ultimate expression of Art Deco, combining bold gemstones in various cuts and colors, along with single cut diamonds. The wide bracelet combines lapis lazuli, coral, amethyst and aquamarine. The gemstones, three of them opaque, the fourth transparent, were chosen for their bright, contrasting tones. All the elements were combined in a setting that is half gold and half platinum, another bold choice by the makers. Until this sale, this bracelet remained in the same family since it was purchased in 1925, a rarity of provenance that shows an appreciation for its unique beauty. The bracelet soared past its pre-sale estimate of $400,000-600,000 to over $900,000. It was sold at Christie’s New York headquarters, housed in an Art Deco building that is part of Rockefeller Center. 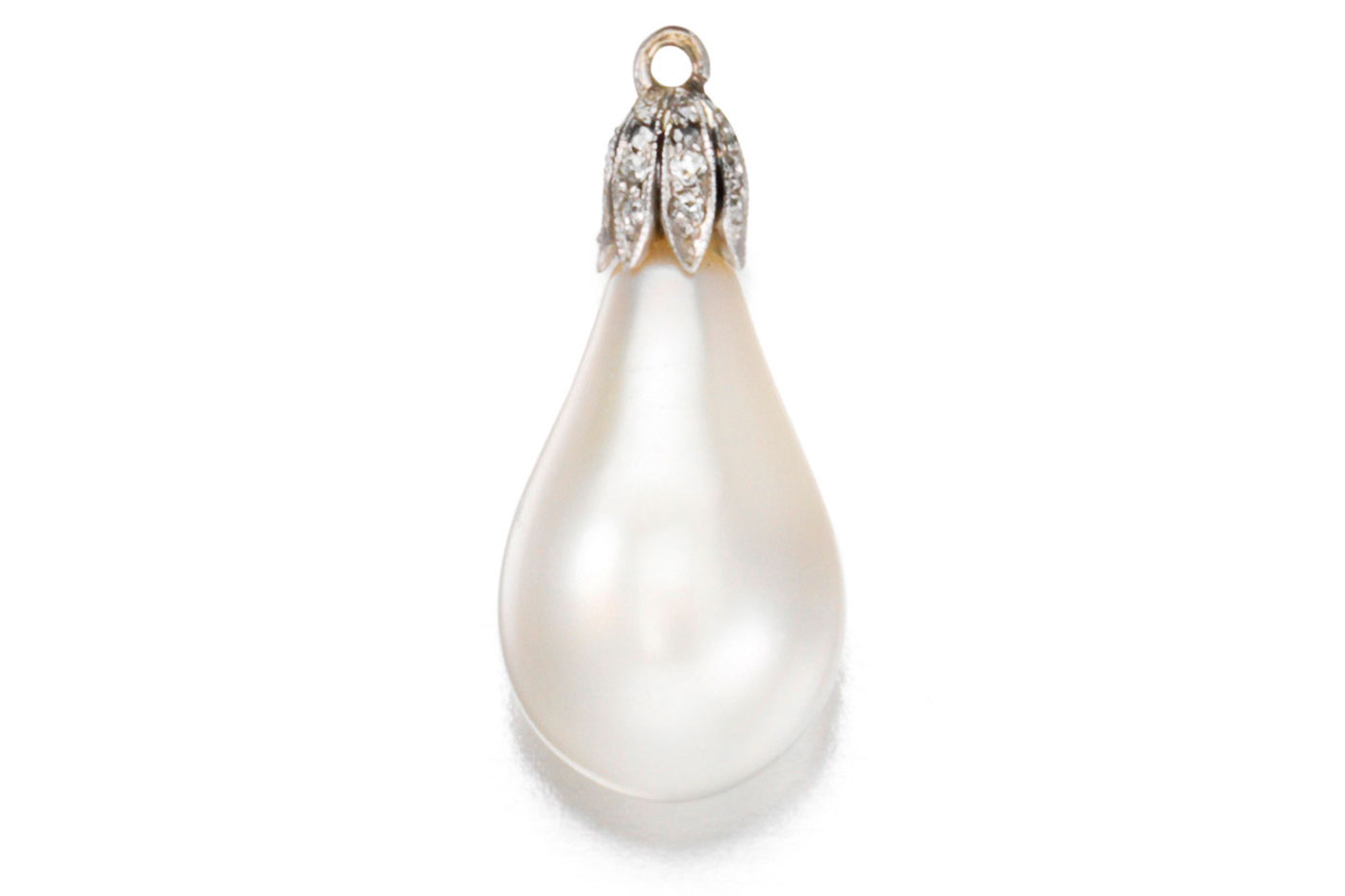 Natural saltwater pearls are the leading ladies of the gem world. Created and shaped entirely by nature, they are by their very essence, quite rare. Stir in excellent luster, great size and symmetry and you have a pearl worth fighting over. True connoisseurs of the jewelry world didn’t need any urging to leap into the bidding for the tear-drop shaped pearl from the estate of philanthropist and nature lover Mary Clark Thompson at Bonham’s New York sale. When the auctioneer asked for an opening bid of $50,000, bidders around the room erupted with huge increases. $100,000, said one, $500,000 said another, in a rush to get to the ultimate price of $1,452,500. The pearl, measuring 14.1 mm in diameter and 22.30 mm in length, was set in a rose-cut diamond collar. The selling price made it the third most valuable single natural pearl ever sold at auction. Bonham’s US jewelry department head Susan Abeles simply said, “Pearls of that size and quality really are rare,” and pearl lovers knew it was highly unusual to see such a perfect pearl come to auction. “There was bidding from every continent,” Abeles added, showing that appreciation for the pearl drop knew no boundaries. 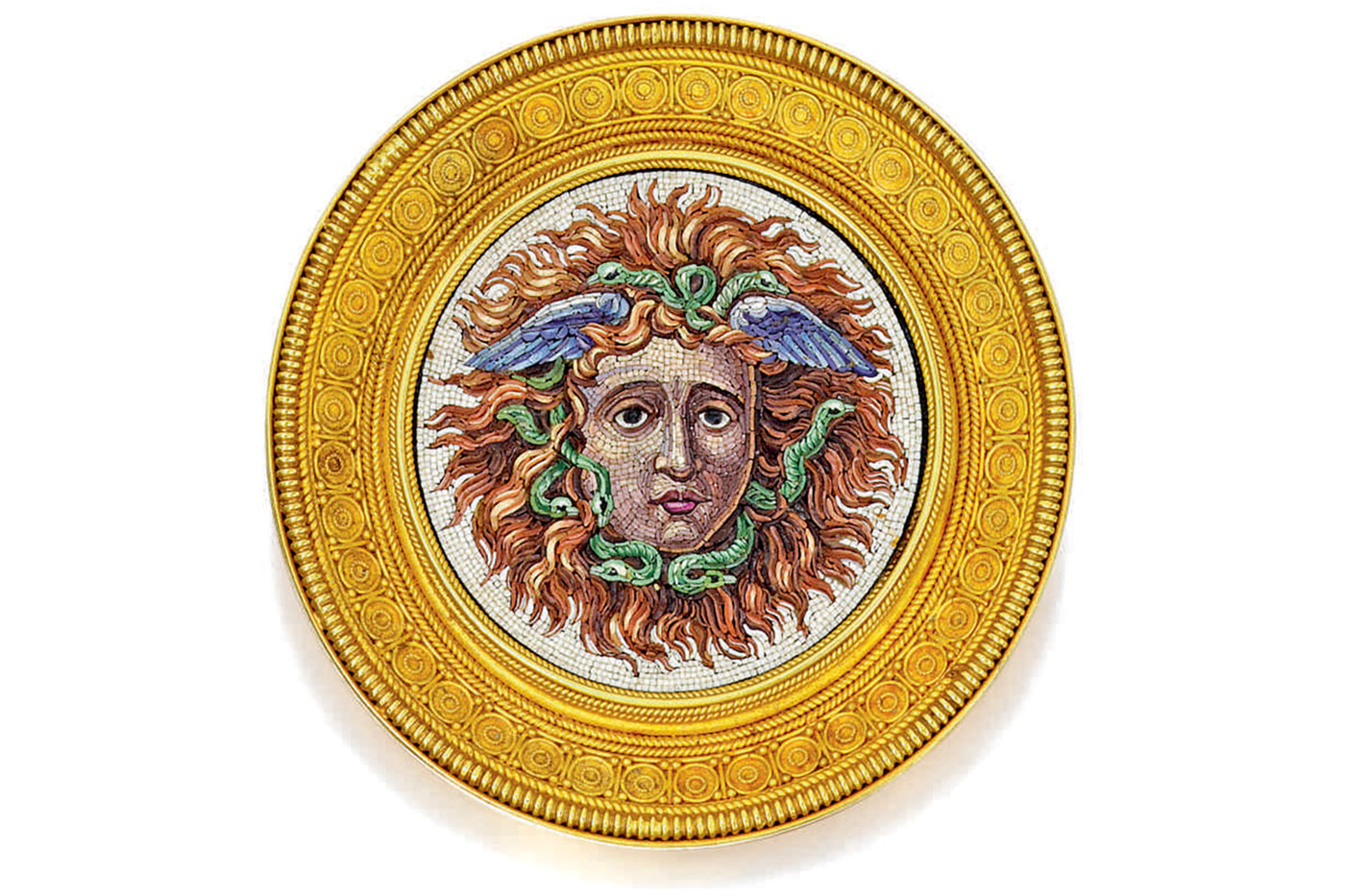 Measuring just two inches in diameter, this 19th century brooch from the House of Castellani is a tour de force of mosaic glasswork in miniature. The classical motif of the head of Medusa is depicted in multi-colored glass tiles, thousands of them, cut and placed within the gold frame. Micro-mosaics were inspired by ancient Greek and Roman tiled mosaics that were created by placing and cementing small pieces of colored stones onto floors. Some of these have survived for more than 2,000 years and more are still being uncovered in modem excavations by those seeking to build in ancient regions. Master goldsmith Castellani took Italian glassmaking wizardry to new levels when he brought this ancient technique to modern jewelry. By using the tiny tiles, known as tesserae, skilled craftsmen were able to capture every curve of the subject including the waving locks of hair, the sensuous lips and the soulful eyes. Luigi Podio presided over Castellani’s workshop and is credited with the making of this piece. This jewel is an example of the period known as Archaeological Revival. Sotheby’s antique jewelry expert Carol Elkins notes the brooch is one of only two known to be in private hands and points to the masterful use of purple and brown stones to add depth and shadowing to the face. “It is a very painterly piece,” she adds. Estimated to bring $30,000-40,000, the brooch was sold at Sotheby’s New York for $137,500.