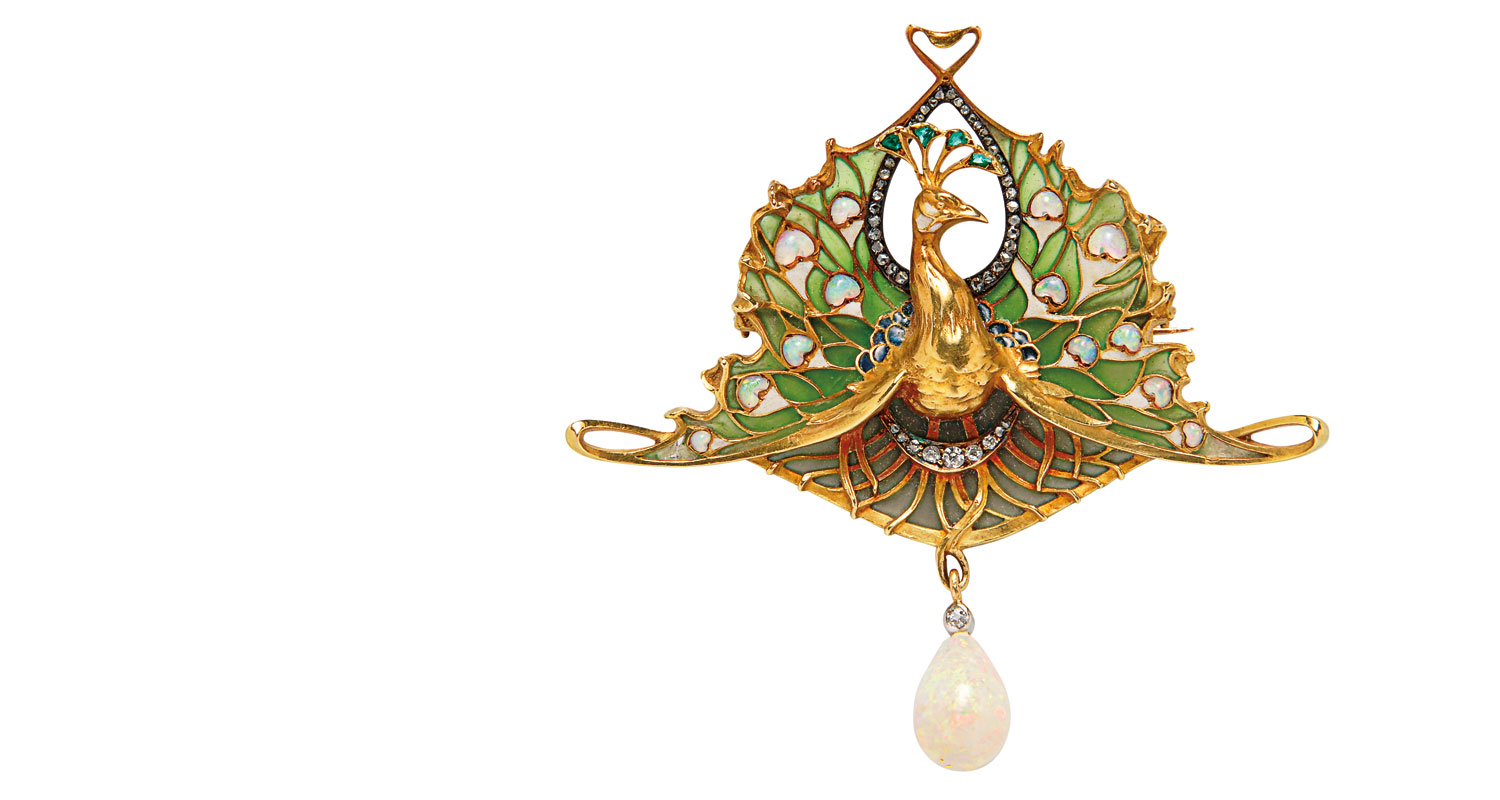 Courtesy of Skinner Inc.
Extraordinary jewelery and wearable art recently sold at auction
Art & Object is pleased to present jewelry and other wearable art recently sold at auction. Since the beginning of time, jewelry has proven to be a medium of expression that defines our tastes, our resources, and our sensibilities.  Jewelry extends into decorative arts and has become a defining statement of culture.  Our column is presented by Ettagale Blauer, author and authority on jewelry design. 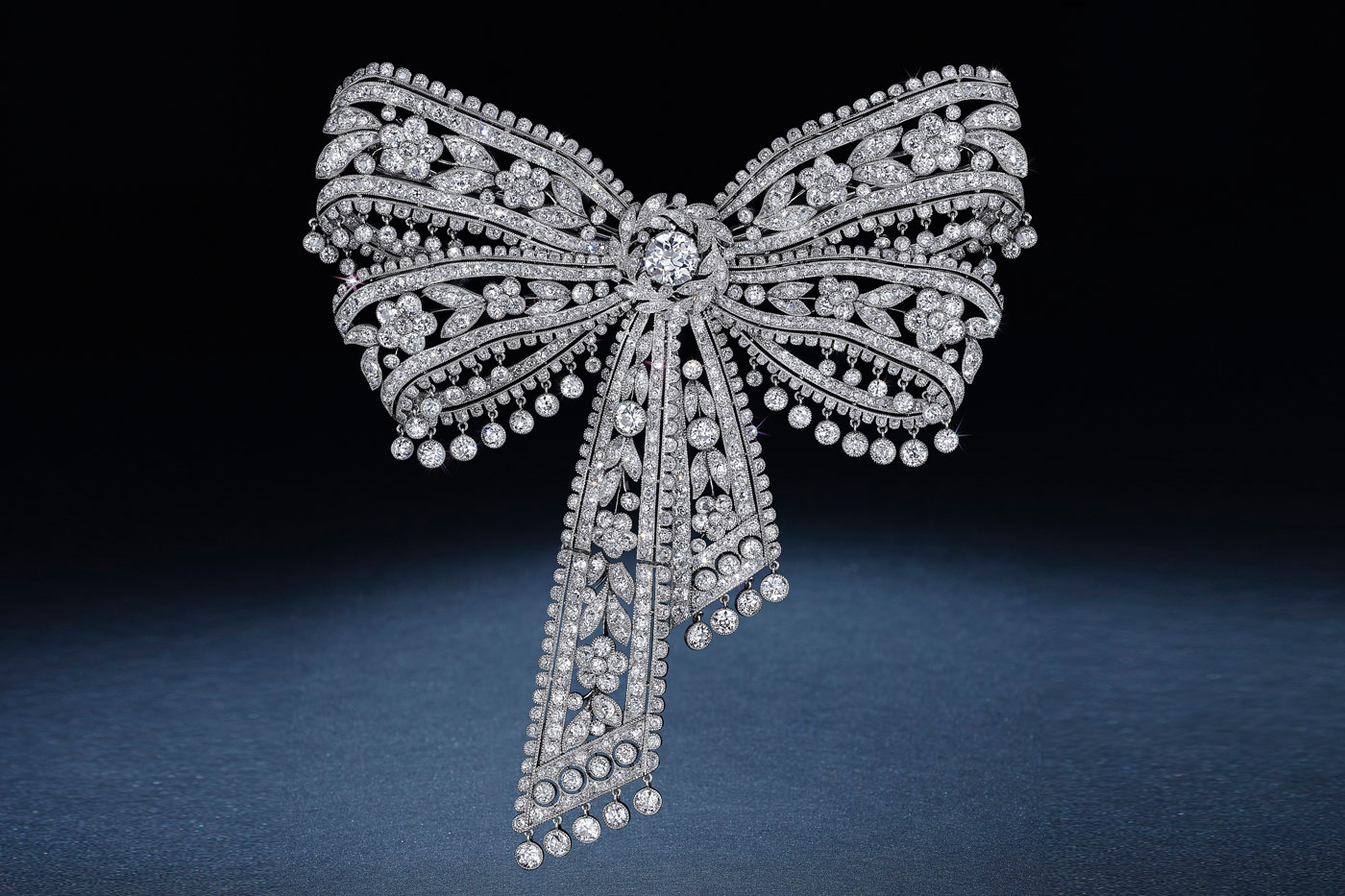 Remarkable craftsmanship, ingenuity of design, and a feeling for romance combine in this antique diamond bow brooch by Cartier circa 1904. The soft folds of the double loop brooch and the gently draped fringed ribbon ends belie the hard materials that comprise this large jewel. Epitomizing the Belle Époque era, the platinum and diamond brooch measures a substantial 4 ¾” by 4 ¼“, though its hefty size and weight would have been ably supported by the well-structured fashions of the day. The Belle Époque, an era roughly defined as the period between 1890 and 1914, came to an abrupt end with the onset of the First World War. A term applied by historians in hindsight, this “beautiful era” was a time of luxury for the privileged class, and most importantly, a time of peace. Coexisting in the same time period as Art Nouveau, these competing fashion modes offered women a clear choice of expression in style and design.

This exquisite brooch by Cartier, accompanied by a red leather case, was designed to be convertible. The trailing asymmetrical ribbons detach from the main double loop design. The loops of the brooch feature diamond-set and edged leaf designs. The articulated structure also features small diamonds hanging from the edges of the loops and the ribbons. Although the brooch is very large, the open-work design gives it a lacy, delicate appearance. Fetching nearly half a million dollars at auction, the sale showed that there is an appreciation for fine workmanship: the value of this piece of jewelry is in its make, not in the intrinsic worth of its diamonds. 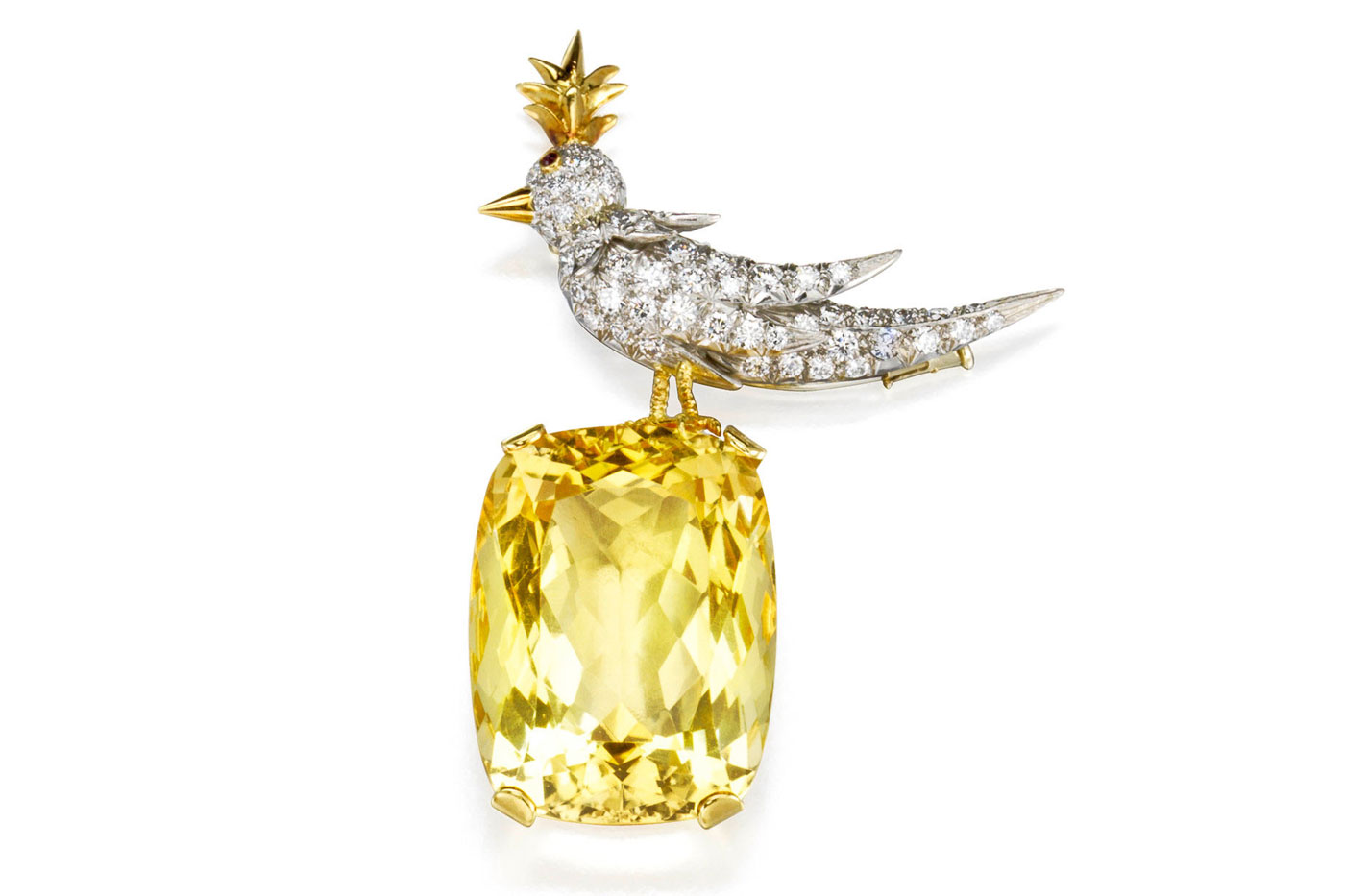 “Iconic” doesn’t begin to describe this whimsical setting, modestly dubbed “Bird on a Rock,” created by renowned jewelry designer Jean Schlumberger for Tiffany’s best known stone, the 128.54 carat fancy yellow Tiffany Diamond. For 17 years this diamond, the ultimate symbol of the Fifth Avenue retailer’s reputation as the preeminent seller of fine diamonds, nested securely in a showcase to the left of the store’s main entrance. Alas, in 2012, the 82-facet modified cushion cut diamond flew away from its setting and was remounted in an elegant diamond necklace, also by Schlumberger.

Do not despair. From time to time, an authentic replacement comes to auction for those seeking to wear a piece of the rock, or at least, a fine facsimile. Tiffany has made versions of the original through the years, using various gemstones as the rock. In the most recent auction season, several of these birds came to roost at once. Among the versions on sale was this beautiful citrine example, sold at Bonham’s for $18,750. It closely resembles the original both in the color of the gemstone as well as its multi-faceted cut. The 54-carat citrine is a fine stand-in for the priceless original – priceless because it was never up for sale. This perky diamond bird sports a yellow gold coxcomb, adding to its jaunty appearance. Sotheby’s New York sale on December 7, 2017 saw the bird perched on a cushion-cut amethyst, with one ruby eye set into its all-diamond feathered body. This colorful example sold for $25,000, well above its pre-sale estimate of $10,000-15,000. And finally, at least for this season, another bird, this one with its 18k gold feet firmly planted on a deep orangy-yellow citrine flew higher than all the rest, making $55,921 at Christie’s Hong Kong sale on November 28. 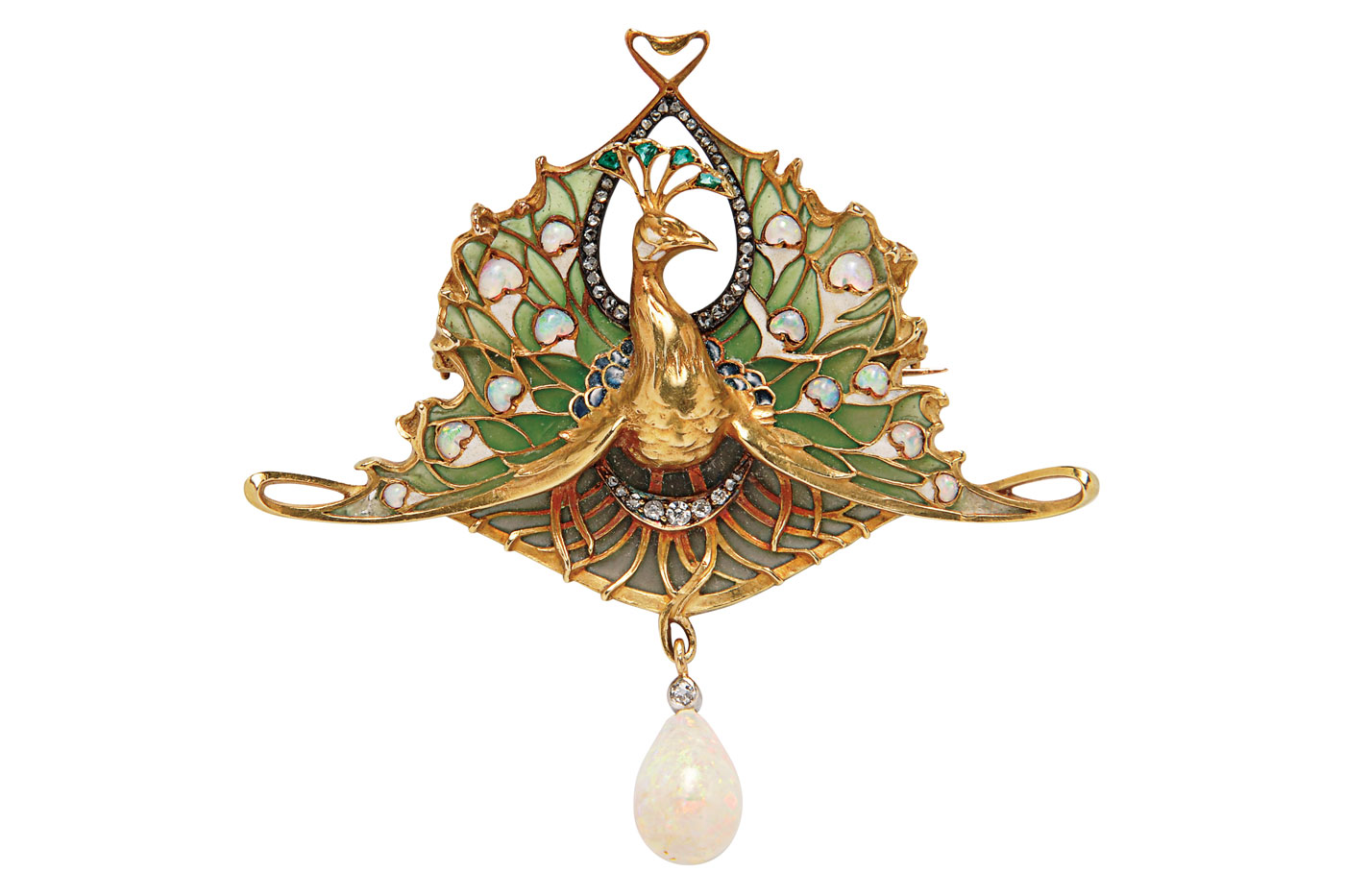 Proud as a peacock

Art Nouveau epitomizes one of the most romantic, ethereal and dreamlike of all the jewelry periods. Very little of this delicate jewelry has survived the century-plus since it emerged onto the fashion scene around the turn of the last century. Spanning about fifteen years, from 1895 to 1910, Art Nouveau coincided with the British Edwardian era and the French Belle Époque.

Art Nouveau was all sinuous curves and suggestion, real creatures merging into mythical ones, female forms morphing into birds and insects. It was a break, in every way, from the jewelry that preceded it. The value of Art Nouveau pieces stem from their design and not their preciousness. That should have protected it from the fate of its gem-set cousins, which were often broken apart for re-setting into newer styles. Unfortunately for today’s collectors, many Art Nouveau pieces were too fragile to withstand much wear and tear. The work is lacy and more delicate than sturdier pieces made of platinum.

Some of the most ethereal designs included enamel, which is very difficult to repair. The gossamer-like wings of birds and insects were fashioned from plique a jour enamel. This extraordinary technique is made without any backing for the enamel, allowing the light to shine through, hence the term plique a jour which translates loosely to ‘light of day.’ The effect is similar to that of stained glass windows, but on a much smaller scale.

An exquisite example of the period, an Art Nouveau 18k gold, opal, diamond and enamel pendant-brooch by Lucien Gautrait, made its way to auction in Boston. The pendant, in the form of a peacock with plique a jour plumage, features a detachable opal and diamond drop as well as a removable brooch fitting. It was made in France, circa 1900 and sold for $28,290, double the high estimate. 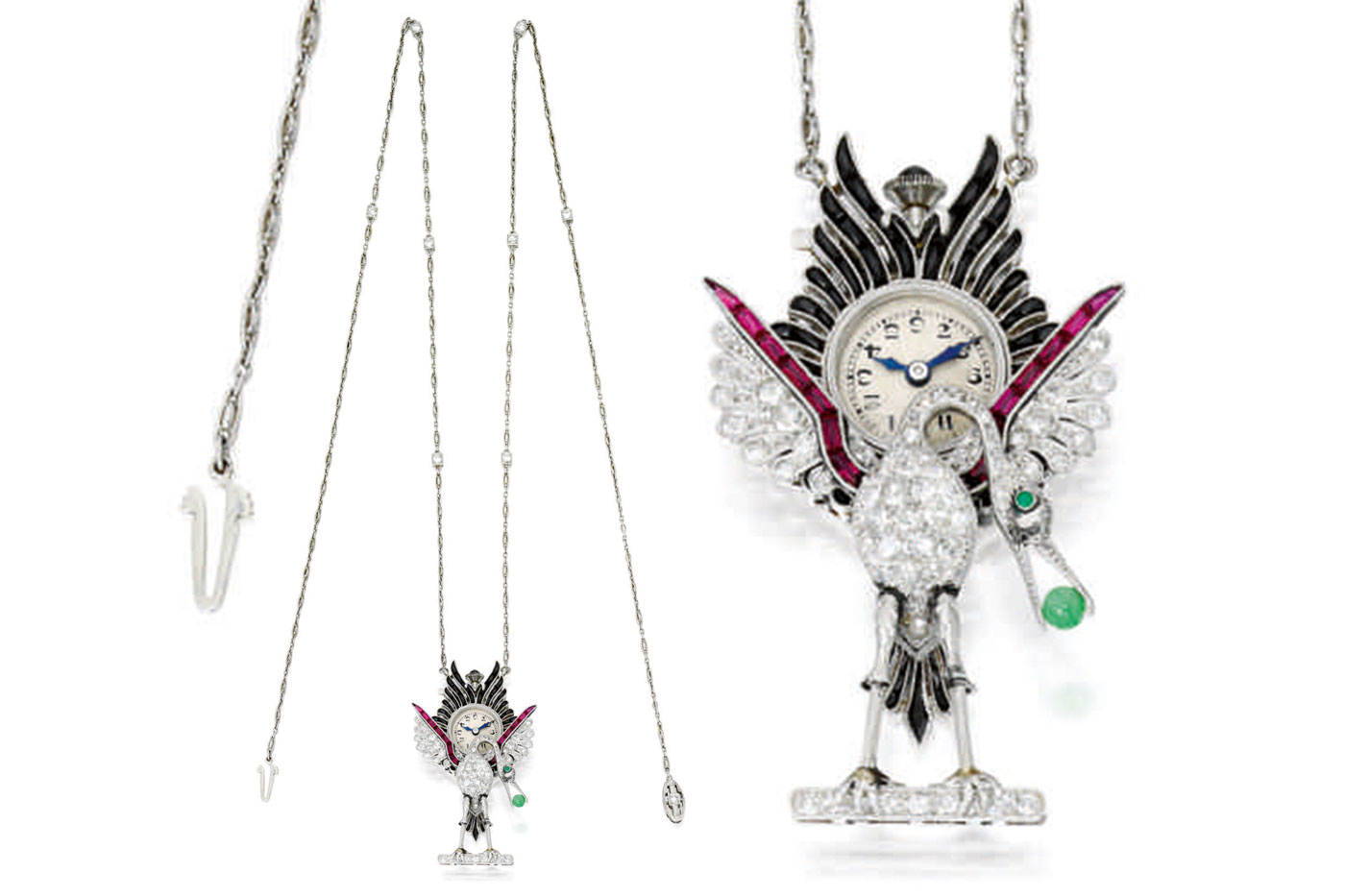 Jewelry making is always a collaborative effort and this Art Deco-era watch pendant is a master class in how many different craftsmen are needed to create a small jeweled work of art.

When the pendant is closed, all that can be seen is a glittering stork, the body all diamond-set, the wings spreading out into fringes of calibré cut onyx edged with two rows of synthetic rubies. Each section of the feathered wings is rimmed in platinum beading. In his beak, the stork holds one jade bead, perhaps representing an egg. Only the onyx cabochon at the top which acts as the winding stem indicates that there is a watch contained within. The wings separate to reveal the mechanical movement. Swiss assay marks and workshop marks point to the era in which it was made, circa 1925.

Setting the watch within the frame took the skills of the watchmaker and jeweler combined, working to assure that the upright winding stem would be well protected yet easily adjusted. The moving wings had to open smoothly, yet close securely, to protect the watch within. The entire shape of the stork, the wings, the beak and the stand for the claws were all fashioned by the metalsmith. The stone setter and designer had to collaborate to assure that the diamonds would be perfectly sized to fit into the crook of the stork’s neck. The beak needed to be open to just the right degree to accommodate the jade bead. The stones had to be sourced according to the exact specifications of the various parts of the design. The rose-cut and single cut diamonds were chosen individually and then set firmly in place with a variety of gem-setting techniques.

Finally, the pendant watch was suspended from a fine-link chain, itself accented with round diamonds. The entire piece had to be balanced precisely to ensure it hung perfectly when being worn.

Though whimsical in design, this pendant watch is a tour de force of jewelry making.