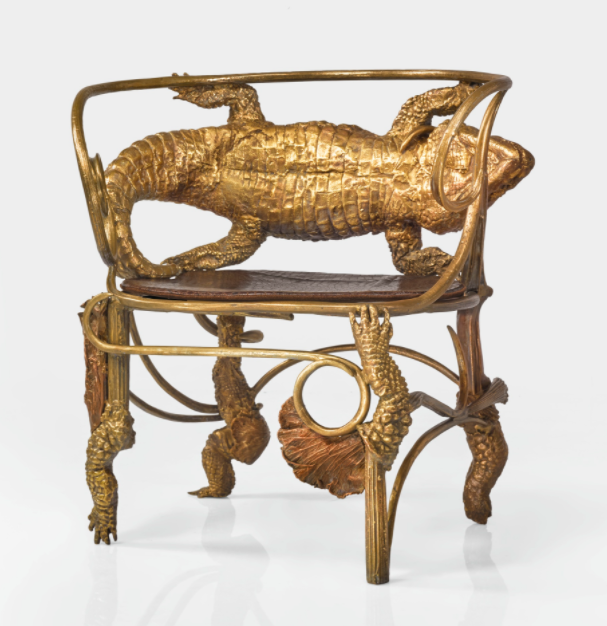 AUCTION 13 DECEMBER IN NEW YORK NEW YORK – Sotheby’s is pleased to announce highlights from our 13 December auction of Important Design. A carefully curated selection of historic and postwar designs 2 spanning from 1870 through present day will be on offer, and is led by a suite of three rare “Crocodile” works by Claude Lalanne. The sale is further distinguished by an important rediscovery in the scholarship of Frank Lloyd Wright, an iconic “Bone” Armchair by Joris Laarman, as well as property from a number of esteemed private collections, including: the Jerome and Ellen Stern collection, the collection of Hana Soukupová and Drew Aaron, the Jacqueline Fowler Collection, and an Important American Collection.

Sotheby’s exhibition of Important Design will be on view from 9 December at our York Avenue headquarters, alongside our two dedicated auctions of Tiffany Studios works.

The sale is led by a trio of “Crocodile” masterworks by Claude Lalanne, emerging from the same An Important Manhattan Collection and capturing the legendary designer’s acute dexterity and poetic imagination. Exacted by the artist from a live model of the animal, the pair of “Crocodile” Armchairs (estimates $300/500,000, respectively) and “Bureau Crocodile” desk (estimate $350/500,000) epitomize the Surrealist influence that defines Lalanne’s designs and testify to the significance of her work in the wider dialogue of the movement. In fact, Surrealist pioneer Max Ernst is photographed sitting in a “Crocodile” chair in the company of the artist herself. The suite of patinated bronze masterworks will make their auction debut this December. 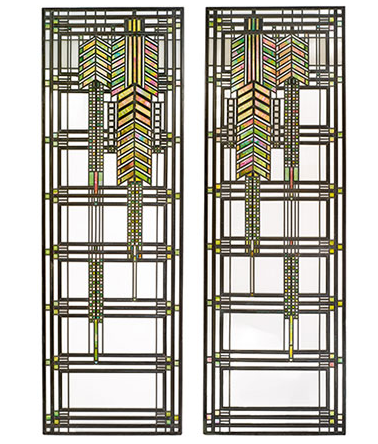 Sotheby’s is honored to present a landmark offering of six stained-glass panels from two of Frank Lloyd Wright’s seminal early commissions: The Susan Lawrence Dana House in Springfield, Illinois (1902-1904) and the Darwin D. Martin House in Buffalo, New York (1903-1905). Executed with the impeccable workmanship of the Linden Glass Company of Chicago, the “Sumac” and “Tree of Life” panels, cascading with abstracted botanical forms, marry naturalism with geometry, the indoors with the outdoors, and epitomize Wright’s design philosophy, mastery of form, composition, and material. The presentation at auction of such important works from his extensive oeuvre is made rarer still by the unique opportunity to acquire paired or book matched panels designed for the Dana and Martin commissions.

The rediscovery of two Important and Rare “Sumac” Windows (pictured above, estimate $200/300,000 each) marks one of the most exciting moments in recent Frank Lloyd Wright scholarship. While their existence was well known to scholars and collectors through a series of historic photographs documenting his work at the Chicago Architectural Club’s 20th Annual exhibition at the Art Institute of Chicago in 1907, their whereabouts were unknown until now.

Wright used the present windows – designed for the Susan Lawrence Dana House, one of Wright’s largest and most decoratively ambitious Prairie-period buildings – to add accents of color to the display of 38 projects representing the pinnacle of his work from the period.

Lots 90-93 were designed for the Darwin D. Martin Complex in Buffalo New York, which is regarded as one of Wright’s most extraordinary architectural triumphs of the Prairie-period. Comprised of six buildings, all of which had stained-glass windows, the complex included the Martin House, which was home to the most iconic of the stained-glass designs: the “Tree of Life”. Lot 90 presents one of the most elaborate examples of the pattern from the house’s 50+ windows executed with this particular imagery. Stained-glass works from the Martin House can now be found in numerous museum collections, such as the Cleveland Museum of Art and the Art Institute of Chicago, among others. The 4 © Dana Meilijson Photography © 2017 Andy Warhol Foundation for the Visual Arts / Artists Rights Society (ARS), New York few remaining windows are now part of the house museum – Frank Lloyd Wright’s Martin House Complex. 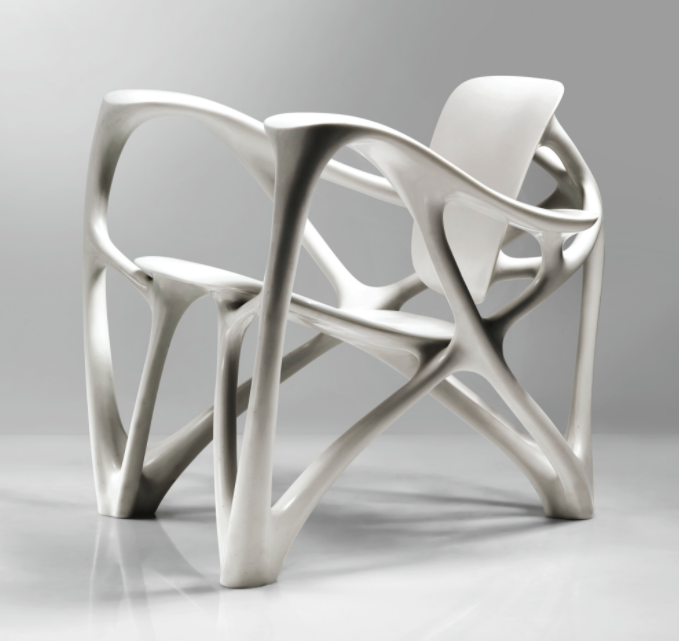 An amalgamation of sculptural beauty and structural strength, the present work emerged from Laarman’s exploration of an algorithm that mimics the growth structures of trees and bones. The piece is distinguished from, yet also echoes, other works in the “Bone Furniture” series. The armchair’s white Carrera marble and resin provide a stronger connotation to human bone structures compared to other pieces in this collection. The armchair marks the first “Bone” model that used 3D printing for its casts, which enabled Laarman to experiment with more visually arresting designs. The offering of this elegant piece coincides with a mid-career retrospective currently on view at New York’s Cooper Hewitt, Smithsonian Design Museum (Joris Laarman Lab: Design in the Digital Age, September 27, 2017–January 15, 2018), solidifying the magnitude of the Dutch designer’s visionary creations.

AN ENSEMBLE OF IMPORTANT PRIVATE COLLECTIONS

“Renouncing our possessions and moving to Nepal” – a comical analogy that describes the serious life change for supermodel Hana Soukupová and entrepreneur Drew Aaron, who have decided to deaccession part of the design collection from their Connecticut home. Exhibiting an emphasis on exceptional condition and provenance, the selection on offer is led by Claude Lalanne’s Pomme (estimate $150/200,000) – number four from an edition of eight – and presents a captivating dialogue between French mid-century and post-war works by Jean Royère, Pierre Guariche and Jacques Quinet.

Further highlights from the collection include a "Nuage" Bookshelf by Charlotte Perriand (estimate $70/100,000) and a Pair of "Advocate" Armchairs for the High Court, Chandigarh, India by Le Corbusier and Pierre Jeanneret (estimate $30/50,000). 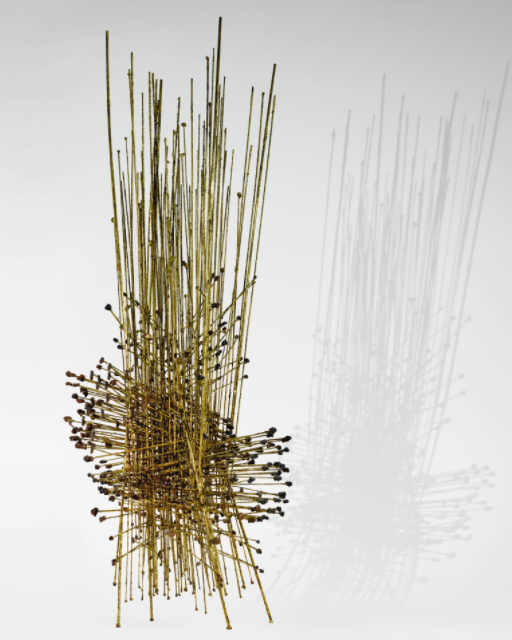 A series of Design Masterworks from an Important American Collection seamlessly integrates prewar and postwar designs that span more than 50 years. The collection is led by Harry Bertoia’s intensely intricate Maquette for the "Comet" Sculpture Designed for W. Hawkins Ferry (pictured above, estimate $150/200,000). Domestic in scale, the present work is a preliminary model for Comet — a 1964 monumental sculpture that Bertoia designed for the home of W. Hawkins Ferry, an acclaimed 20th century collector and architectural historian.