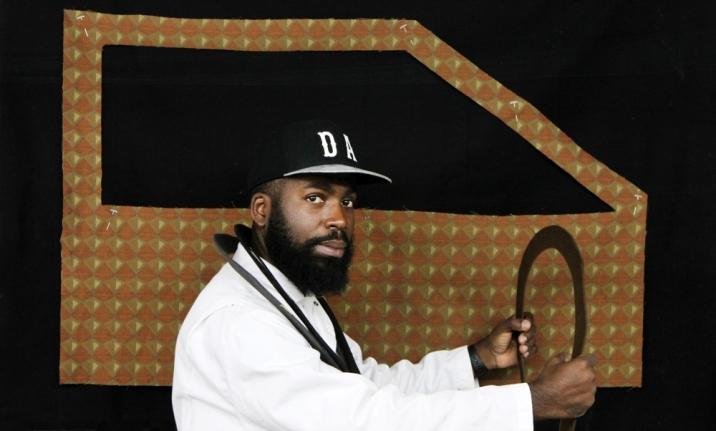 Courtesy of the Museum of Arts and Design, Photo by Terrence Jennings

Derrick Adams in his studio

The Museum of Arts and Design (MAD) announces the opening of Derrick Adams: Sanctuary, the artist’s first major museum exhibition in New York. Presented in an installation designed by the artist, the exhibition comprises fifty works of mixed-media collage, assemblage on wood panels, and large-scale sculpture that reimagine safe destinations for the black American traveler during the mid-twentieth century. The body of work was inspired by The Negro Motorist Green Book, an annual guidebook for black American road-trippers published by New York postal worker Victor Hugo Green from 1936 to 1967, during the Jim Crow era in America. Adams activates the source material in myriad ways to meditate on identity politics and the role that leisure time plays within the black experience.

“Collage as both an early Modernist and hobbyist technique is the apt medium for Adams’ elegant yet poignant and political work,” said Shannon R. Stratton, MAD’s William and Mildred Lasdon Chief Curator. “It’s a nod to leisure as subject while acknowledging collage’s historic relationship to current events and pop culture. As part of MAD’s 2018 spring season, The Personal Is the Political, Adams demonstrates how vernacular materials and accessible techniques have been fertile ground for powerful, yet approachable, expressions of selfhood.”

The Negro Motorist Green Book, often referred to simply as The Green Book, listed establishments that were welcoming to black Americans—including hotels, restaurants, beauty parlors, nightclubs, golf courses, and state parks—in an era when open and often legally prescribed discrimination against people of color was widespread. These designated safe spaces were sites of refuge and leisure, where one could spend quality time with friends and family. The depiction of leisure is a theme of continued interest to Adams, who explores how engaging in relaxation and reflection can be a political act for black Americans.

“When Derrick expressed to me that he wanted to create an exhibition inspired by The Green Book, I knew that he could bring the historic publication to life,” said Guest Curator Dexter Wimberly. “Sanctuary captures the spirit of road travel at a time when black Americans were not able to move safely around the country. When I think about freedom in the truest sense of the word, I’m struck by how relevant The Green Book still is today.”

Derrick Adams is a New York–based, multidisciplinary artist working in performance, video, sound, textile- and paper-based collage, and multimedia sculpture. His practice is rooted in deconstructivist philosophies such as the fragmentation and manipulation of structure and surface, and the marriage of complex and improbable forms. Through these techniques, Adams examines the impact of popular culture and the media on the perception and construction of self-image, resulting in work that appears to be both in a state of deconstruction and in the process of being built. A keen observer of his environment, Adams continuously collects patterned fabrics, culturally specific references, and design elements that he incorporates into his work.

In 1936, Victor Hugo Green, a forty-four-year-old black postal worker living in Harlem, published the inaugural issue of The Negro Motorist Green Book (1936–1967). The fifteen-page booklet, which Green wrote based on his own experiences and recommendations from black members of his Postal Service union, listed establishments, such as restaurants, hotels, beauty parlors, and even private homes, that welcomed black travelers. The Green Book initially covered the New York metropolitan area, but the response was so great that the next year Green expanded it to cover the entire country. It was available for purchase at black churches, Masonic lodges, and Esso gas stations, as well as from the Negro Urban League and the NAACP. In 1952, Green retired from the Postal Service to become a full-time publisher. The final edition of The Green Book, published in 1967, peaked with a circulation of twenty thousand copies. It filled ninety-nine pages and covered all fifty states, in addition to locations in Canada, the Caribbean, and Mexico.

Writing in 1948, Green predicted, “There will be a day in the near future when this guide will not have to be published. That is when we as a race will have equal opportunities and privileges in the United States.” He died in 1960, four years before Congress passed the Civil Rights Act of 1964. Today, The Green Book serves as a poignant artifact and reminder of the importance of equality during a time in which uneven law enforcement continues to negatively shape the lives and experiences of many black Americans.

The twentieth century saw the rise of automobility in the United States, the establishment of the Interstate Highway System in 1956, and the subsequent ubiquity of automobiles, which irreversibly changed American culture. In an era when “going for a drive” was a common leisure activity, the “open road”—as championed by Walt Whitman and Jack Kerouac—connoted freedom and a democratic public space. However, civil rights laws did not keep pace with the proliferation of easier transportation. For black Americans traveling by car in the era of segregation, the open road presented serious dangers in both northern and southern states. Driving interstate distances to unfamiliar locations, black motorists ran into institutionalized racism in several forms, from businesses that refused to accommodate them to hostile “sundown towns,” where posted signs might warn black people that they were banned after nightfall.

The idea of literally driving across racial boundaries presented black motorists with any number of quotidian challenges, including where to eat, where to sleep, and what to do in the event of an emergency. Automobiles introduced a new, complex layer to the American experience, and fifty years after The Green Book was published for the last time, the act of “driving while black” remains controversial.

Starting in March, Derrick Adams: Sanctuary will be accompanied by Unpacking the Green Book: Travel and Segregation in Jim Crow America. The companion exhibition will explore the history of The Green Book in an interactive project space that features a reading area with books devoted to the topics of segregation, automobility, and leisure; digitized copies of The Green Book; interactive maps of travel destinations included in the book; and numerous excerpts from upcoming documentary films. It will also showcase two banners by Cauleen Smith, featured in the 2017 Whitney Biennial and now in the permanent collection of the Museum of Arts and Design, and two sculptures exploring locations in Harlem and Washington, DC, from William D. Williams’ 2012 Dresser Trunk Project.

Unpacking the Green Book: Travel and Segregation in Jim Crow America is the inaugural project in the Learning Lounge, MAD’s gallery space dedicated to deepening audience experiences of exhibitions through interactive learning, research, and reflection. The exhibition’s goal is to foster curiosity and deeper investigation into the history of racial oppression through the lens of the black experience in the twentieth- and twenty-first-century United States, using art, film, and literature to encourage dialogue, critical thinking, and empathy. Though organized in association with Derrick Adams: Sanctuary (January 25–August 12, 2018), the exhibition explores issues of mobility and racism that are relevant to the experiences happening at the United States–Mexico border, as illuminated in the upcoming exhibition La Frontera: Encounters Along the Border (March 1–September 23, 2018).

Derrick Adams: Sanctuary is guest curated by Dexter Wimberly, Executive Director of Aljira, a Center for Contemporary Art, with support from the Museum of Arts and Design’s Assistant Curator Samantha De Tillio.

Read more about this exhibition.
Tags
Museum of Arts and Design