A curated selection of items recently sold at auction. Pull up a chair and linger over four exceptional pieces of tableware guaranteed to enliven your next dinner party. By Sheila Gibson Stoodley
February 2019 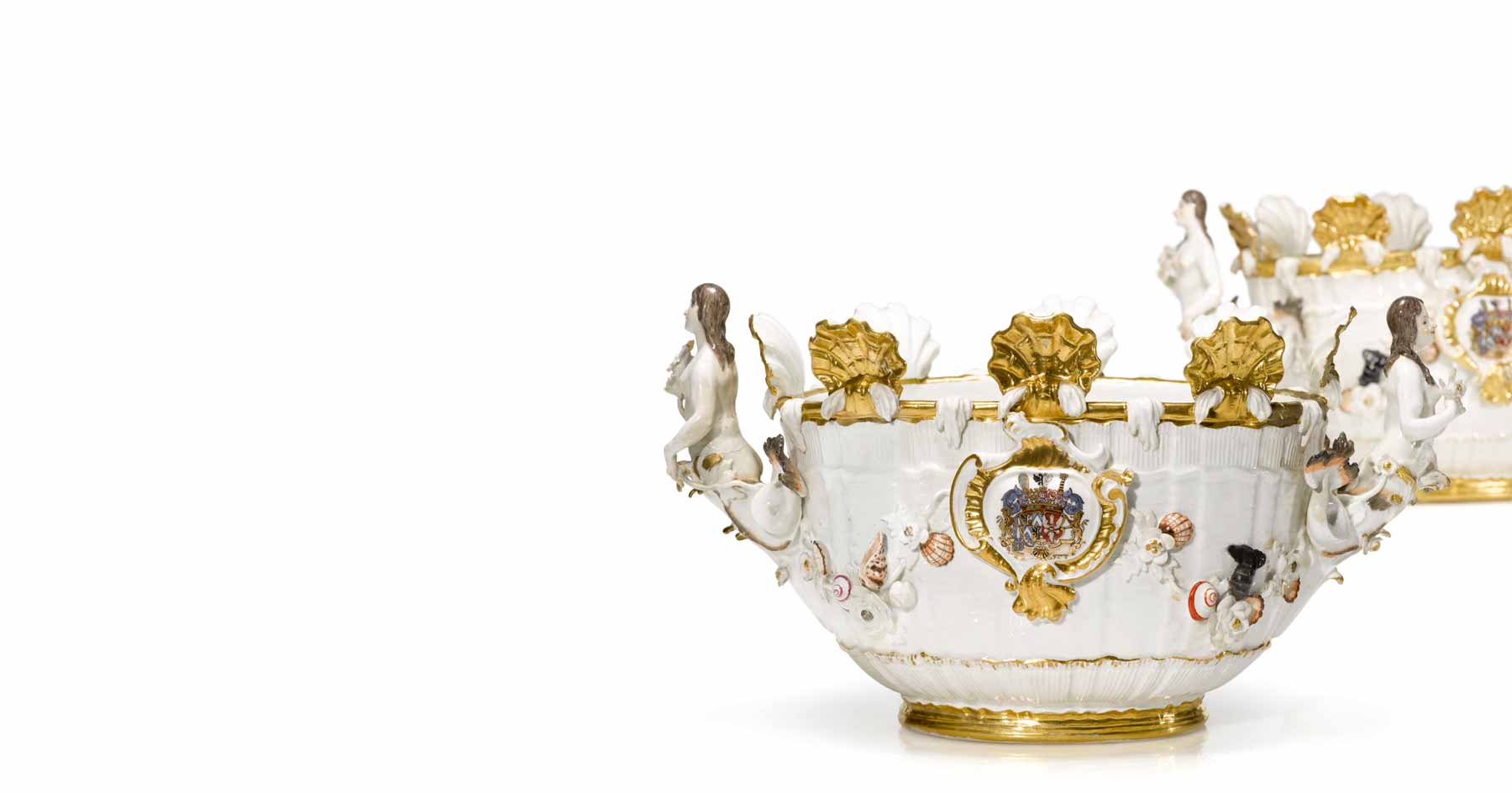 A curated selection of items recently sold at auction. Pull up a chair and linger over four exceptional pieces of tableware guaranteed to enliven your next dinner party. 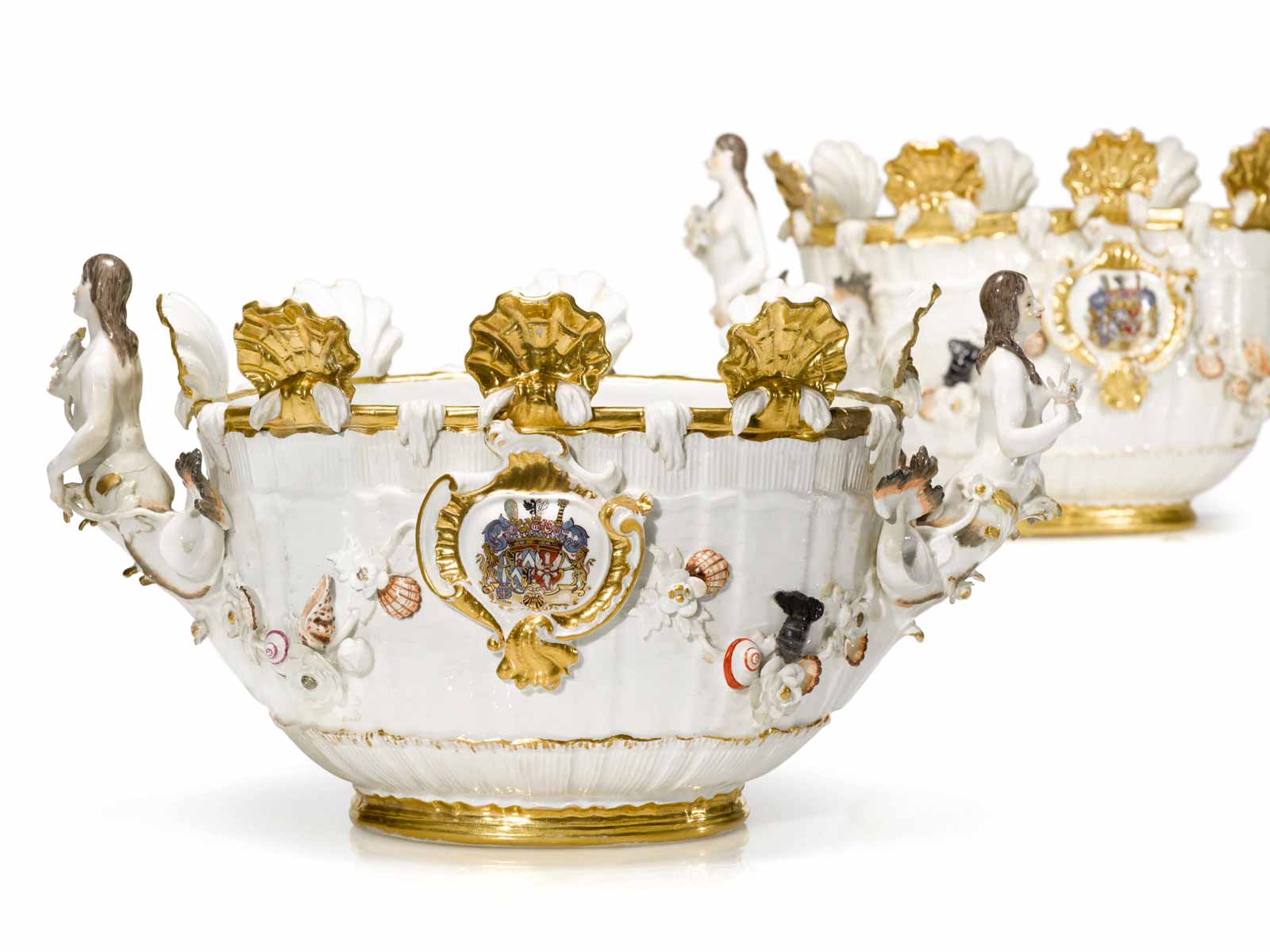 When you look at a pair of monteiths from Meissen’s Swan service, a legendary 18th century collection of porcelain tableware, you understand why inviting guests over for dinner earned the name “entertaining.” Decorated with figures of comely maidens, gilded shells, flowers, and plenty of gilt, the fanciful ceramics are more entertaining than a pair of bowls meant for cooling and rinsing wine glasses have a right to be. (The notches visible between the gilded shells along the rims of the bowls are stem rests.) The monteiths sold for $212,500 against an estimate of $150,000 to $250,000 in Sotheby’s auction of property that once belonged to the late Nelson and Happy Rockefeller. It was the most prominent example from Meissen’s Swan service in the auction, which included 16 pieces in 14 lots that collectively commanded $735,000 against a total estimate of $439,000 to $691,000. (The auction’s grand total was $3.3 million.)

Commissioned by Count Heinrich von Brühl in the 1730s and designed by Johann Joachim Kaendler, creator of Meissen’s spectacular porcelain animal sculptures, the Swan service contained more than 2,200 pieces, fashioned over several years, and could serve up to 100 guests. The sprawling collection of tableware did much more than feed hordes of dignitaries in one sitting. Commissioning a ridiculously elaborate custom service from Meissen in the 1730s wasn’t far off from commissioning a one-off Bugatti or a Patek Philippe pocket watch with dozens of complications. It was an extra-extravagant status symbol that only the most powerful, wealthy, and connected could obtain. Count Brühl, who served as prime minister to King Augustus III, was the probably the only person aside from the king who could do it. “It’s probably the most celebrated service that Meissen made, and the best known,” says Christina Prescott-Walker, director of the Asian art and decorative arts divisions for Sotheby’s New York. “It’s the first and only service they made that had a three-dimensional, sculptural quality. It’s large in scale, and made for impressing figures at court. It’s a significant work of European art. It transcends just being a dinner service. People who collect Meissen want an example from the Swan service, and some collect just the Swan service.”

The original service descended in the count’s family, with pieces entering the market here and there over the centuries. World War II reduced its mighty numbers by half, but tales of Red Army troops tossing plates in the air for target practice might be embellished. The Rockefellers assembled their Swan service collection piece by piece, buying at auction and from dealers during the middle of the previous century. Fellow collectors follow the same path, picking up a plate here and a confectionery dish there as they reach the market. The Rockefeller auction offered a relative abundance of the scarce, coveted 18th century porcelain. “It’s a very large group from the Swan service to come up at one time,” Prescott-Walker says, noting she’d handled ceramics for ten years and was “pretty sure 16 pieces have not come up” over that time. Seeing one or two Swan items per year at auction is more typical. “You can expect to wait. They don’t come up frequently,” she says.

The Rockefellers put their Swan service pieces to work, though they stopped short of chilling wine glasses in their monteiths. “I think they used them to decorate the table and used a reproduction service to eat off of,” Prescott-Walker says. (Meissen continues to make and sell replicas of certain pieces from the Swan service.) “They brought them out to use as serving pieces, as table centerpieces. They were not displayed in cabinets in the pantry. They were used. They’re in such good condition, it’s hard to believe they weren’t decoratively displayed.” 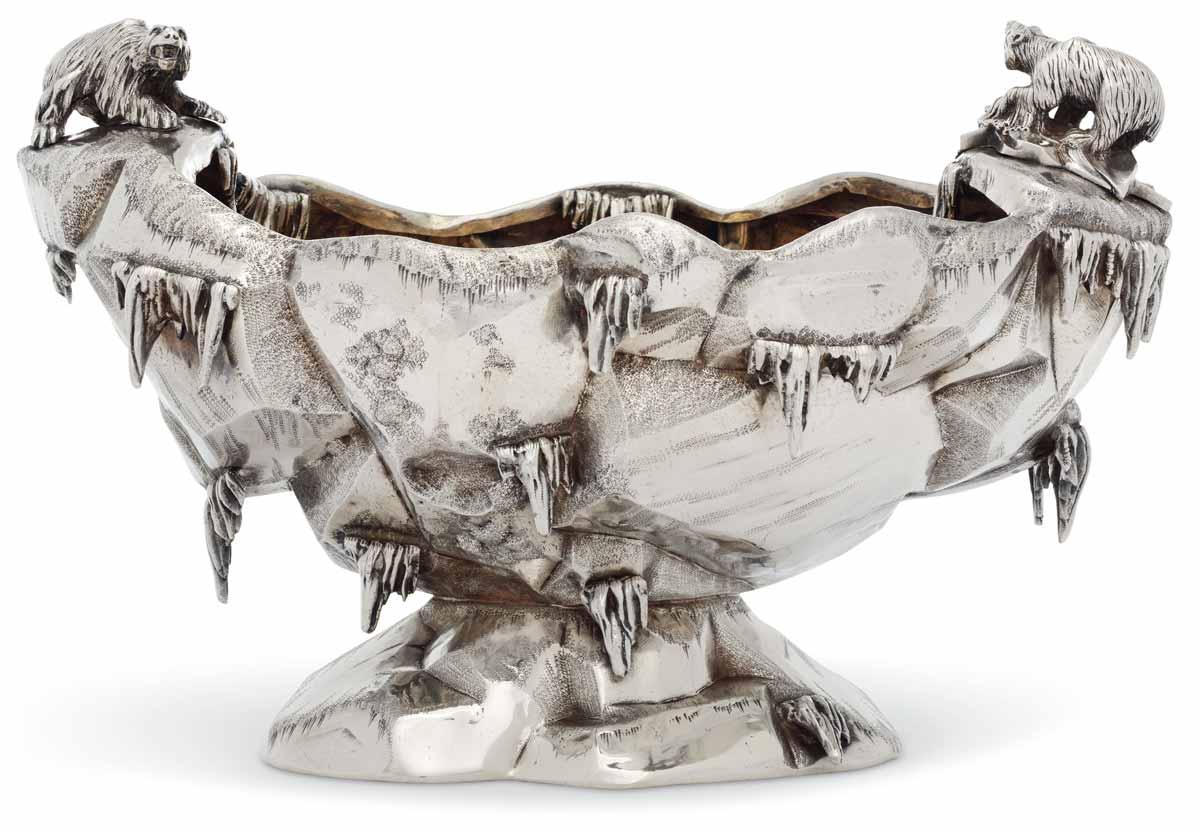 Silverware isn’t vulnerable to fads. Clients generally want traditional, tried-and-true styles, and silversmithing is labor-intensive. By the time a master artisan could complete a pop culture-themed set, it would seem oh so very last week. This silver ice bowl, produced by the now-defunct American silver company Gorham in 1870, represents an exception. Gorham’s team drew inspiration from the 1867 purchase of the Alaska territory from Russia. The $7.2-million-dollar deal captivated American pop culture of the post-Civil War era, which admittedly moved far slower than the tweet- and meme-driven cacophony of today. Gorham realized that an Arctic theme would be perfect for an ice bowl, and off they went. “You were coming right out of the Civil War, which had utilitarian silver. Here, you have for the first time something sculptural and whimsical,” says Jill Waddell, senior specialist in silver at Christie’s.

The bowl isn’t part of a pattern, but Gorham made a few versions of it between 1868 and 1872, as well as a bucket-like form and matching ice-serving spoons and tongs. Christie’s auctioned this bowl solo, without spoons or tongs, but its original purchaser might not have ordered them. The charming vessel, festooned with fierce-looking polar bears and rows of icicles, was more practical than it looks. The metal bowl helped keep the ice cold in an age that predated refrigerators and portable coolers, and it naturally allowed for a dramatic trick, as Waddell explains: “When you fill it with ice, [you get] a wonderful frosted surface on the bowl that makes it look even more like an iceberg.”

This example sold for $45,000 against an estimate of $15,000 to $25,000. It performed well, but Christie’s sold another 1870 ice bowl in January 2017 for $52,500 against an identical estimate, which seems to be an auction record for an example of the bowl without accessories. (Bowls with a matching serving spoon or tongs have commanded more than $68,000.) Waddell attributes the high sums to “really good condition. The icicles were intact, you can see the fur and the claws on the feet of the bears, and there’s pale yellow gilding inside [the bowl]. A pale, lemony, buttery color is what you want to see.” 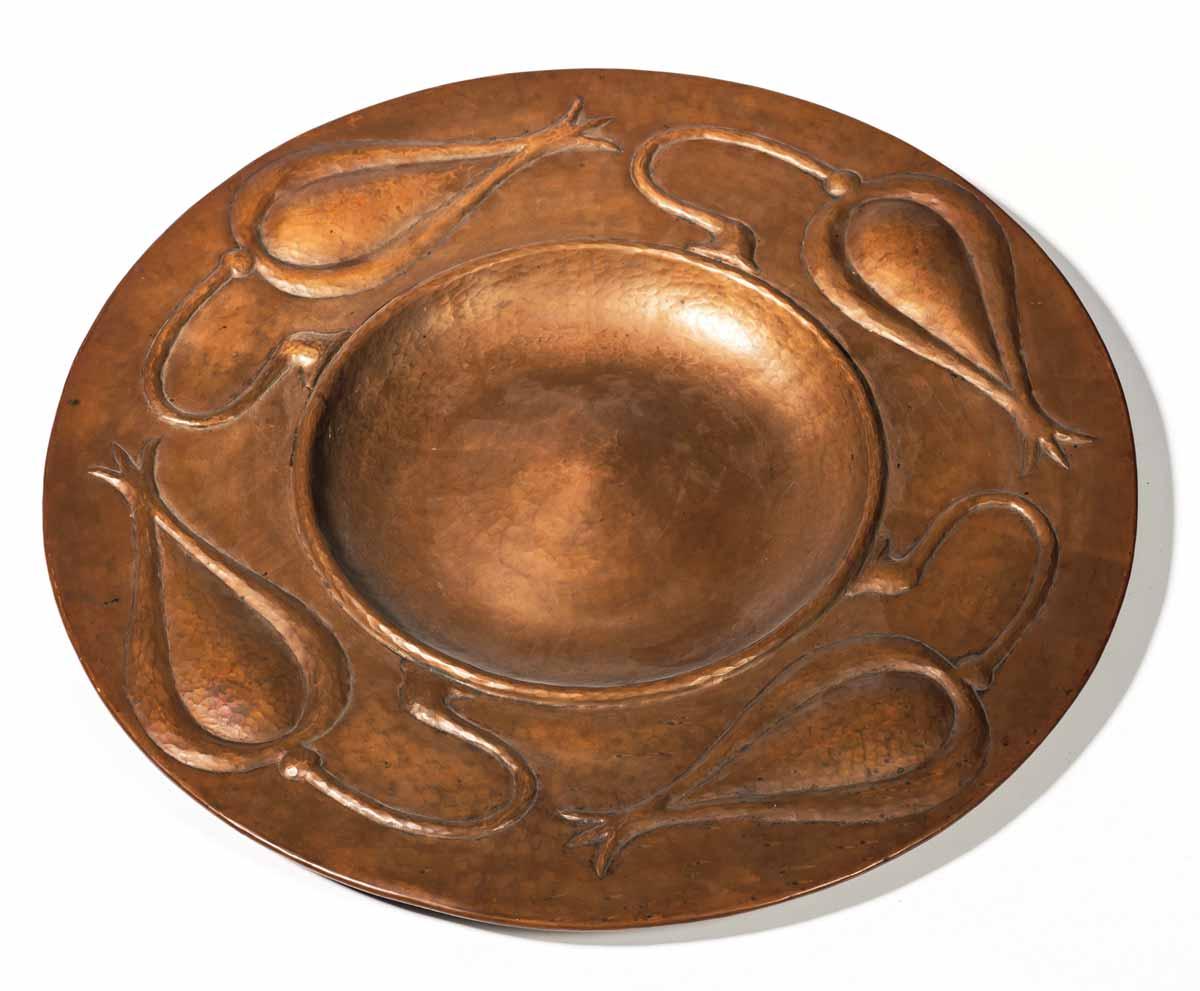 No one is immune to typos, auctioneers included. A Gustav Stickley copper charger in Skinner’s 20th Century Design sale in December fetched multiples of its published $400 to $600 estimate, but its intended estimate was $4,000 to $6,000. Evidently, there was a slip-up during data entry. Daniel Ayer, director pro tem for 20th century design at Skinner, shrugged it off gracefully. “No matter what estimate I put on it, the market put it where it should go,” he says, noting that similar Stickley chargers have sold for as much as $16,000.

Chargers are ornamental plates, laid out to greet guests arriving at a dinner party and whisked away from the table at the start of the meal. Sometimes, bowls and plates containing the first course are placed on chargers, but they typically don’t have direct contact with food and utensils. Still, others bypass the table entirely and function as decorations on sideboards and walls. This early 20th century copper Stickley charger was pretty enough for all of those roles, and pretty enough to escape the scrap metal drives of the first and second world wars. It might have been purchased singly but it was part of a pattern, if you count Stickley’s Arts and Crafts style as a pattern. The charger harmonizes with his copper lighting fixtures and furniture hardware, and Ayer says Stickley sideboards contained plate racks that would suit it. 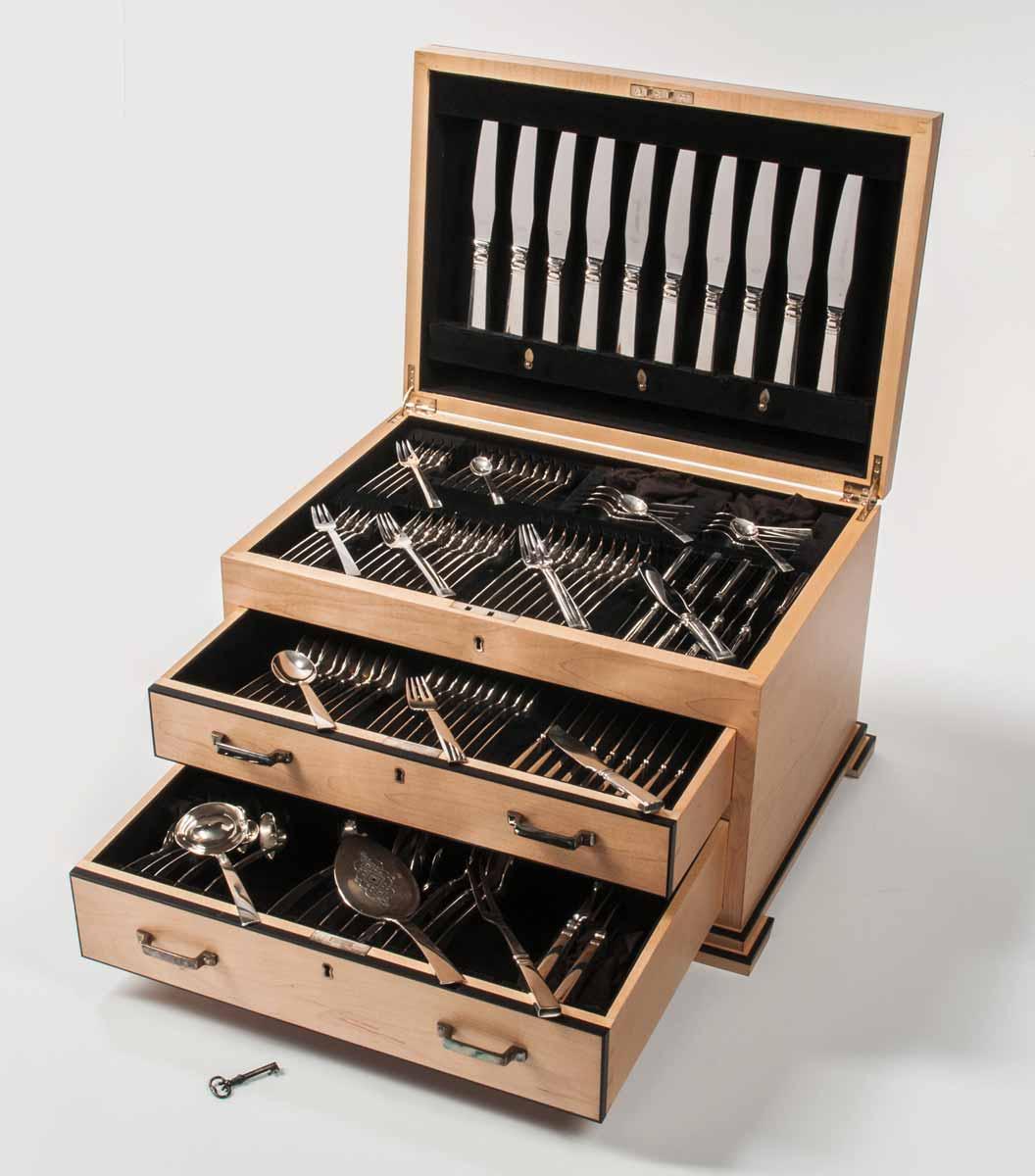 In today’s market, it’s uncommon for a set of silver flatware to sell for double its high estimate. This lot, offered at Skinner in December with an estimate of $4,000 to $6,000, shows how high the bar has risen for flatware at auction. Georg Jensen, a celebrated and still-active silverware brand, produced the set, and while we don’t know how many exist, the pattern was popular, enjoying a 41-year run that ended in 1972. It has a streamlined, mid-century modern appearance rather than the ponderous, over-the-top flourishes of more traditional patterns. The eleven-piece set for ten is extensive, complete, and in great condition. It came with a beautiful custom-made storage chest (perhaps by Jensen, but it’s unmarked). Full sets of Acadia Blok flatware rarely appear at auction; before this, a smaller set that lacked a case sold in 2016 at Rago for $3,250.

Two parties, both present in the sale room, exchanged 29 bids in the battle for the flatware—a welcome example of an old-fashioned live bidding war in a time when the winner or the underbidder or both often compete via phone or Internet. The final price represents another surprise: the winner got a bargain. “Today, if you order Georg Jensen by the piece, it [a comparable set] would have been $50,000 if new,” says Daniel Ayer of Skinner. “If you’re looking at a new set of Georg Jensen for $50,000, or a classic set with case for $12,300, that’s a pretty good deal.”

Photo courtesy of Skinner.
About the Author 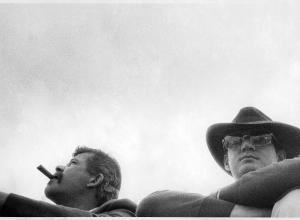