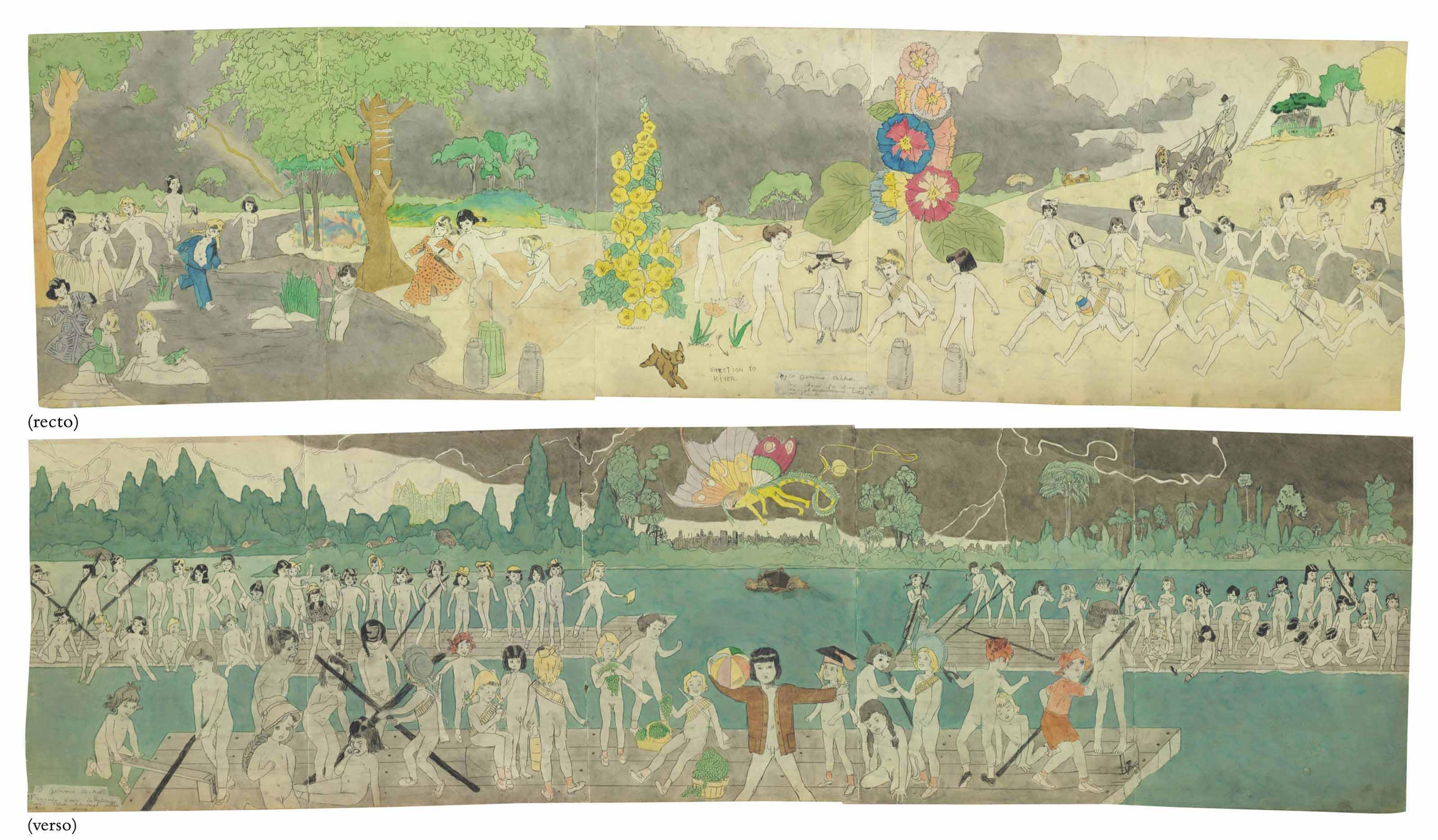 Featured in Christie's upcoming "Beyond Imagination: Outsider and Vernacular Art Featuring the Collection of Marjorie and Harvey Freed" auction on January 19th, is a large work by Henry Darger, a key figure in outsider art. On the auction block is an over six-foot long double sided page, 93 At Jennie Richee, are chaced for long distance by Glandelinians with blood hounds. / 95 At Jennie Richee, Escape down Aronburgs Run River through circle section in storm, excerpted from his epic The Story of the Vivian Girls, in What is Known as the Realms of the Unreal, of the Glandeco-Angelinian War Storm Caused by the Child Slave Rebellion.

The pages here are typical of the overall text, and include large washes of color, nude figures of children and mythical creatures, and vibrant flowers. The Realms of the Unreal is an over 15,000 page epic story with a complex mythology set in another world, which centers around the Vivian Girls, heroines of a child slave rebellion fighting a brutal battle for freedom against their masters. The pages are multi-media, often collaged, including tracings and watercolors, and are pieced together from smaller sections of paper. As the titles (text) of these pages indicate, the story is often violent, as good and evil battle it out in Darger's mind and work.

Born in Chicago in 1892, Darger lived his life in obscurity, working as a hospital janitor until retirement. Aside from work and daily Catholic mass, Darger was a loner, who unbeknownst to those around him, was working on an artistic masterpiece in his small apartment in the Lincoln Park neighborhood of Chicago. Upon his death in 1973, his landlords discovered his creative output, and since then Darger's work has become some of the most celebrated in outsider art, captivating and audiences and finding a home in important museum and private collections.

The 15,000 pages of The Realms of the Unreal having been divided, Darger's oeuvre is fairly large, but still in high demand. In Chicago, Intuit: The Center for Intuitive and Outsider Art, has devoted a permanent exhibit to understanding Darger's work and world. The Henry Darger Room Collection serves as an archive for Darger own belongings, providing context for viewers to understand his massive creative output.

Christie's estimates 93 At Jennie Richee, are chaced for long distance by Glandelinians with blood hounds. / 95 At Jennie Richee, Escape down Aronburgs Run River through circle section in storm from $200,000 - $400,000, Read more about the work on their website.