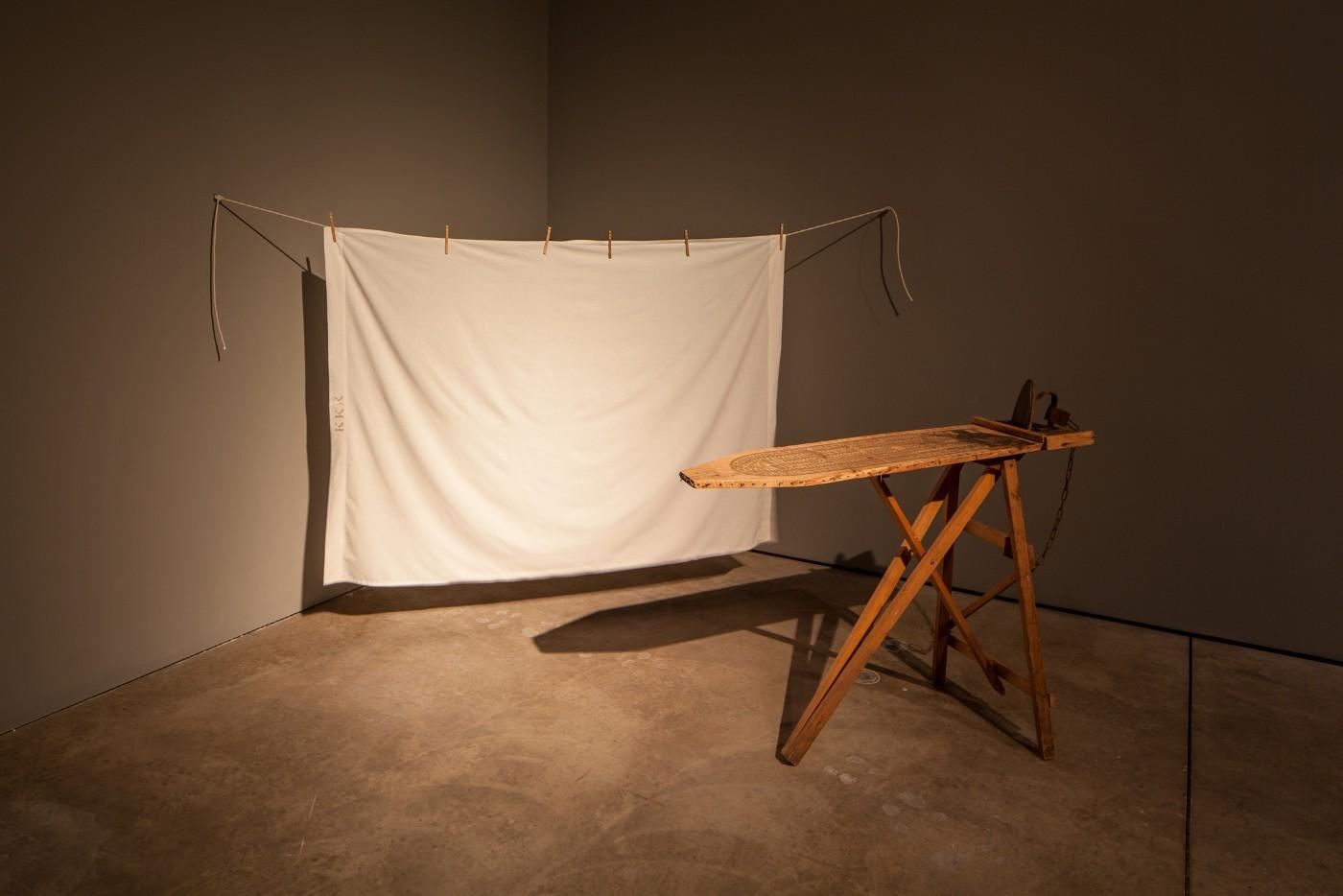 Betye Saar, "I’ll Bend But I Will Not Break," 1998, Los Angeles County Museum of Art, gift of Lynda and Stewart Resnick through the 2018 Collectors Committee

“Each year, Collectors Committee presents a full and exciting weekend designed to support the museum’s permanent collection through new acquisitions,” said Ann Colgin. “I am grateful to the outstanding Friday evening hosts, chefs, and vintners for preparing incredible dining experiences, the curators for their inspiring presentations, and the committee members whose continued support and generosity make this event possible each year.”

“Collectors Committee’s legacy is built on strengthening and diversifying the museum’s permanent collection,” said LACMA CEO and Wallis Annenberg Director Michael Govan. “It was especially significant that the majority of the proposed artworks this year were by female artists, all now part of LACMA’s permanent collection. Two of the acquisitions will strengthen LACMA’s growing collection of art Page 2 from Africa. With these new acquisitions, we are able to share more perspectives, adding to a fuller and more robust view of art history.”

Collectors Committee Weekend
Since 1986, Collectors Committee Weekend has been one of the museum’s most significant fundraising events of the year and continues to play an essential role in acquiring important works of art for every area of its encyclopedic collection. Throughout its 32-year history, the event has acquired 228 artworks through donations totaling more than $43 million.

Festivities began this year on the evening of Friday, April 20, with members attending one of seven dinners (details below) hosted in the private homes of major LACMA supporters, prepared in person by a celebrity chef and with wines from notable vineyards.

On the morning of Saturday, April 21, members gathered at LACMA to attend curator presentations and view the artworks proposed for addition to the permanent collection. Following the presentations and before the evening voting began, Betye Saar’s I’ll Bend But I Will Not Break (1998) was acquired through a generous gift from LACMA life trustee Lynda Resnick and her husband Stewart, and the acquisition of Martha Boto’s Optique Hélicoidal (Mouvement) (1967) was made possible through a gift from Gayle and Tim DeVries. At the Collectors Committee gala later that evening, emceed by LACMA trustee Ann Colgin, 96 members voted to select which artworks to acquire, while enjoying a special dinner prepared by Joachim Splichal (Patina Catering) with wine supplied by Christian Navarro at Wally’s Wine, Tejon Ranch, and champagne generously provided by Krug Champagne.

Funds for the artwork acquisitions were raised by Collectors Committee membership dues, with additional funds provided by individual members. Adding to the pool for acquisition funds was a short live auction, chaired by LACMA trustee Viveca Paulin-Ferrell, which raised more than $650,000 (a full list of auction items is available below).

In addition, each year, an artist whose work is in LACMA’s collection makes an edition for Collectors Committee members who donate at the highest level. This year, artist Shirin Neshat created Untitled (from Zarin series, 2005), 2018.

Acquired Artworks
The 2018 Collectors Committee weekend made possible the acquisition of the following artworks (in order in which they were acquired):

Betye Saar’s "I'll Bend But I Will Not Break" (1998) is a sculptural tableau comprising an ironing board imprinted on top with a diagram of a British slave ship, showing how scores of bodies were sandwiched into the ship’s lower deck. An iron—chained to the ironing board just as slaves were chained to slave ships—refers not only to female labor but also to the marking of slaves with branding irons. In the tableau, a sheet is pinned to an ordinary laundry line with letters “KKK” appliquéd onto the sheet, a reference to the white sheets and hoods worn by the members of the Ku Klux Klan.

This is the first large-scale work by Saar to enter LACMA’s collection and will be included in the artist’s upcoming LACMA exhibition Betye Saar: Call and Response (opening 2019).

Gift of Lynda and Stewart Resnick through the 2018 Collectors Committee.

Martha Boto’s "Optique Helicoidal (Mouvement)" (1967) is a superb work by a major representative of the kinetic art movement, one of the only women to work in this vein. Created in Paris following Boto's move there from Buenos Aires, the work combines modern technology and new materials (e.g. aluminum, stainless steel, and Plexiglas) to produce mesmerizing optical effects. Deceivingly simple, the work is precisely conceived to trick the viewer’s eye and induce contemplation. “My particular means of movement, color, and light can give the illusion of contraction, or multiplication, so that by optical means the spectator undergoes a series of reactions,” said Boto. This is the first work by this pioneering postwar Latin American artist to enter LACMA’s collection.

Gift of Gayle and Tim DeVries through the 2018 Collectors Committee.

Parviz Tanavoli’s "Lion and Sword II," 1975, and "Lion and Sword III," 1976, two carpets; "Lion and Sword," 2008, a screenprint; and "Lions of Iran," 2015, a portfolio of four screenprints. Tanavoli, one of the founders of Iran’s main modernism movement, has a long-standing fascination with lions, which he has rendered in a variety of media and configurations. In these two carpets Tanavoli highlights a long-established emblem of kingship and the Iranian state—a lion with sun rising from its back (Shir u Khurshid). More recently Tanavoli has returned to these earlier designs in a series of prints, where he redeploys the original images by focusing on color and form. The two carpets will be featured in the upcoming exhibition In the Fields of Empty Days: The Intersection of Past and Present in Iranian Art (May 6– September 9, 2018).

Gift of Hope Warschaw through the 2018 Collectors Committee.

Ruth Asawa’s "Untitled (S.027, Hanging Six Open Hyperbola Forms that Penetrate Each Other, with a Half-Hyperbola at the Top)," (1954) is an early and unusual example of her ethereal hangings that redefine the notion of sculpture as solid form. Described by the artist as “open hyperbola forms that penetrate each other,” the work was inspired by a 1947 trip to Toluca, Mexico, where Asawa observed local artisans forming baskets from a mesh of interlocking wire loops. Upon her return to the U.S. she began her lifelong journey of transforming this functional technique and modest industrial material into poetic works of art. While also known for her drawing, printmaking, and civic art initiatives, Asawa is most revered for these transparent looped-wire sculptures.

Gift of an anonymous donor and the 2018 Collectors Committee with additional funds from the Buddy Taub Foundation.

Julie Mehretu’s "Epigraph, Damascus" (2016) is a monumental six-panel work that uses photogravure, a 19th-century technique that fuses photography with etching, with aquatint (using sugar lift and spit bite) and open bite. Mehretu created the foundation of the print from images of architectural drawings of buildings in Damascus, which she then overlaid with an array of marks—a fusion of past and present that, in the context of Syrian history, resonates with the regrettable reality of history repeating itself. Epigraph, Damascus joins one print by Mehretu, Local Calm (2005), and one painting, Untitled (2012), in LACMA’s collection, and will be featured in her mid-career survey, Julie Mehretu, co-organized by LACMA and the Whitney Museum of American Art (opening at LACMA in November 2019).

Gift of Kelvin Davis and Hana Kim through the 2018 Collectors Committee.

"Forest Spirit Figure" (Nigeria, Niger Delta, Ijo culture, 19th century), a monumental sculptural figure with seven heads and 14 eyes, emblematic of its role in protecting a community and promoting well-being. This commanding guardian figure is the most imposing and expressive of all known examples, and among the most remarkable works of sub-Saharan Africa. It was the centerpiece of Tradition as Innovation in African Art at LACMA in 2008. With its alert, superhuman vigilance, the forest spirit figure will have prominence in LACMA’s permanent collection galleries, underscoring the multiplicity of visions that LACMA embodies and imparts.

Gift of the Silver Family and the 2018 Collectors Committee.

"Collection of African Ceremonial Barkcloth Paintings" (Democratic Republic of the Congo, Mbuti culture, 20th century) are 29 barkcloth paintings created by nomadic groups of people known as the Mbuti, who reside in the Ituri rainforest. Mbuti men harvest bark from trees and pound them into pliable sheets that serve as painting surfaces for Mbuti women, whose art, with its aesthetics of asymmetry and visual dissonance, mimics the imagery of the rainforest and aligns with the syncopated polyphonic rhythms of Mbuti music.

Gift of the 2018 Collectors Committee.

Jennifer Bartlett’s "House Piece" (1970) is an early, seminal work that demonstrates the artist's innovative and characteristic use of enameled steel plates as standardized units for her compositions. It comprises 61 12-inchsquare plates to which color was applied in the form of dots to create multiple representations of what Bartlett described as a “banal, yet poignant” image of a house. The fact that she submits the house image to an almost relentless deconstruction, analysis, and reconfiguration problematizes any fixed notion of “home,” while also investigating the nature of representation itself. House Piece will be featured in the LACMA’s 2021 exhibition Coded: Art at the Dawn of the Computer Age, 1960–1980.

Gift of the 2018 Collectors Committee and the Schloss Family.

"Bodhisattva Mahasthamaprapta" (Korea, Joseon dynasty, 17th century) is a Korean gilt wood sculpture depicting one of the most powerful bodhisattvas in the Buddhist pantheon. Mahasthamaprapta symbolizes the power of wisdom in Buddhist practice, and in East Asian Buddhist art is often paired with Avalokiteshvara, Bodhisattva of Compassion. Like Avalokiteshvara, Mahasthamaprapta is an emanation of the Buddha Amitabha (Buddha of the Western Paradise or Pure Land), and is often depicted in China, Korea, and Japan. This sculpture is a significant addition to LACMA's collection of Korean Buddhist art.

Gift of Florence and Harry Sloan through the 2018 Collectors Committee.

Hakuin Ekaku’s "Willow Kannon" (c. 1755) depicts the Bodhisattva of Compassion who sits in meditation, her eyes slightly opened in accordance with Zen practice. The willow to her right signals that she is the Willow Kannon, evoking both her strength and flexibility. This monumental masterwork is by Hakuin (1685–1768), the best-known Zen Master of the last 500 years, and Japan’s greatest painter-monk. Willow Kannon joins LACMA’s other 10 works by Hakuin; these 11 artworks will form the core of a proposed exhibition on Zen art by curator and head of Japanese art at LACMA Robert T. Singer.

Gift of the 2018 Collectors Committee with additional funds from an anonymous donor, Laurie and Bill Benenson, and Richard Wayne and Charlotte Wayne.