Dante and His Poem by Domenico di Michelino

Wikimedia Commons
Dante and His Poem by Domenico di Michelino

Looking Back as the 700th Anniversary of His Death Approaches 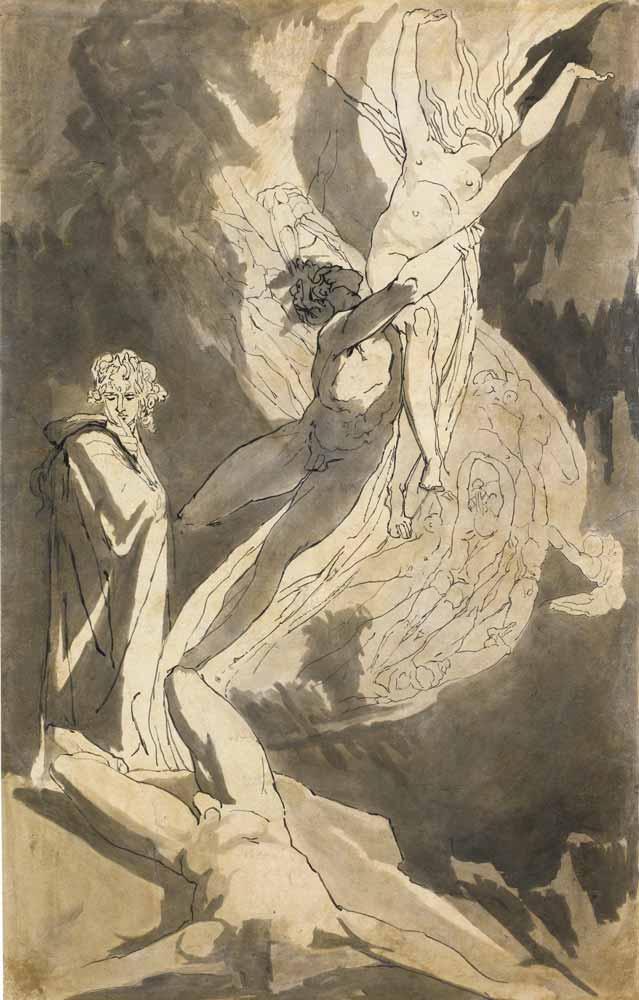 Ever since Dante’s Divine Comedy was published, it both ascended to the canon of Western literature and inspired countless artistic interpretations of the poet’s journey through the otherworld as he and his guides traverse the depths of Hell, climb Mount Purgatory, and then ascend to Paradise. “Artists in all media have responded to the Commedia with an abundance and enthusiasm that even the Bible has not matched,” writes Jean-Pierre Barricelli in the paper “Dante in the Arts: A Survey” published in the 1996 edition of Dante Studies.

Painters have long recognized the importance of understanding the source material intimately: through their execution, they sought to transcribe the poet’s vision.

“Dante’s imaginative comparisons and vivid descriptions of the afterlife have sparked the imaginations of innumerable artists,” Deborah Parker, Professor of Italian at the University of Virginia, tells Art & Object. “Many artists introduce changes, some subtle, others more striking,” she continued. Gustave Doré and Sandro Botticelli—she cites as examples—while generally faithful to Dante’s text, also introduced changes to their works. Doré, for example, added more women among the damned. “Artists don’t just depict, they interpret,” she said. 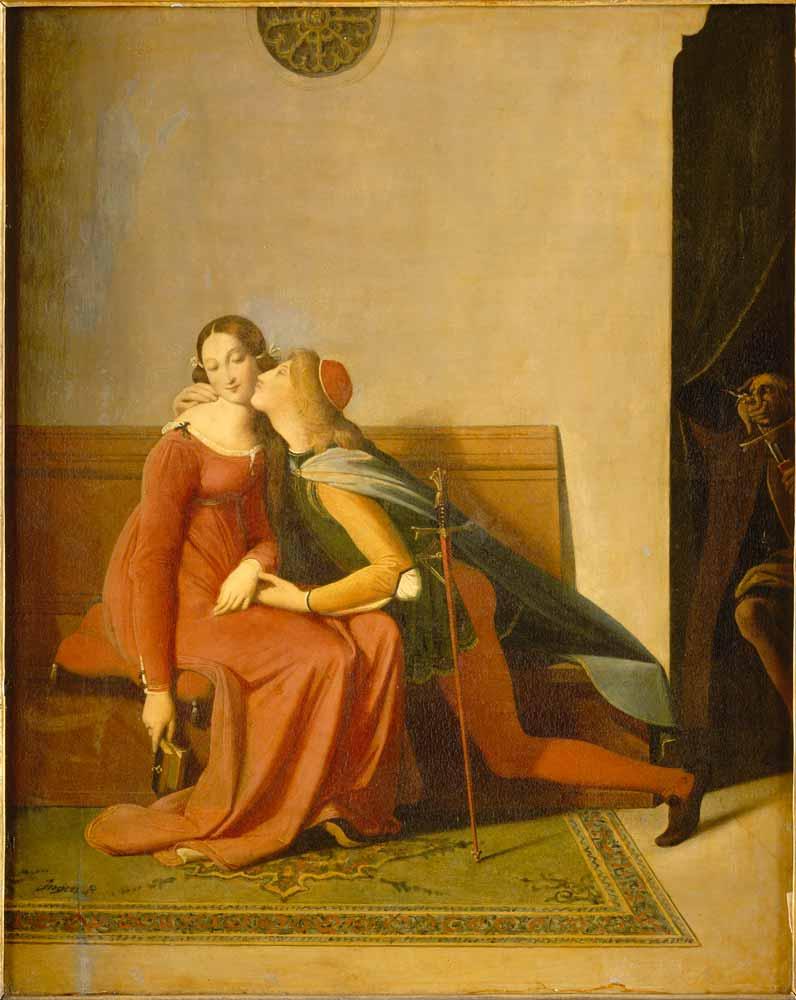 Parker notes, Modernist poet T.S. Eliot himself praised Dante for the way in which he exemplified one of the quintessential functions of poetry, namely “trying to realize ideas” in “clear visual images.” The detail he employed to describe Hell and, to a lesser extent, Purgatory and Paradise was so thorough that the text lent itself to a visual transposition that had been unprecedented.

Manuscripts and print editions of the Divina Commedia, which were all richly illustrated, contributed to the diffusion and popularity of the poem itself, and turned said poem into a source of inspiration for artworks that go beyond the simple illustration of a scene from Dante’s universe. Dante became a main reference not just in poetry, but also in terms of actual descriptions of the underworld. This was to such an extent in Western culture, that it arguably became impossible to ignore the Divine Comedy as a text when faced with visual representations of Hell, Heaven, and Purgatory.

Artists in the fourteenth and fifteenth centuries produced miniatures and illuminated manuscripts by the dozen. Sandro Botticelli was the first serial artist of the poem: he provided illustrations—mostly executed with pen and ink—to Cristoforo Landino’s edition, showing great understanding of the work. Unfortunately, the manuscript eventually disappeared, though it was rediscovered in the late nineteenth century.

One great exception to the Dante pictorial tradition until the 1800s comes from the late mannerist Federico Zuccari (1540-1609). In fact, up until the 1800s, the visual-arts fortune the Commedia enjoyed was mostly tied to individual artworks referencing or inspired by it. The extant drawings of Botticelli’s cycle, in fact, while predating Zuccari’s, were only published in 1887. Notably, Zuccari employed three different techniques for each canticle. The Inferno was drawn in two-tones (red and black) the purgatory in brown ink, because that was the preferred medium for the depiction of natural, diffused light. The last cantos of the Purgatory and Paradise are in red. The Paradise, in general, is less dramatized than Purgatorio and Inferno, because the source material mainly illustrates theological concepts. 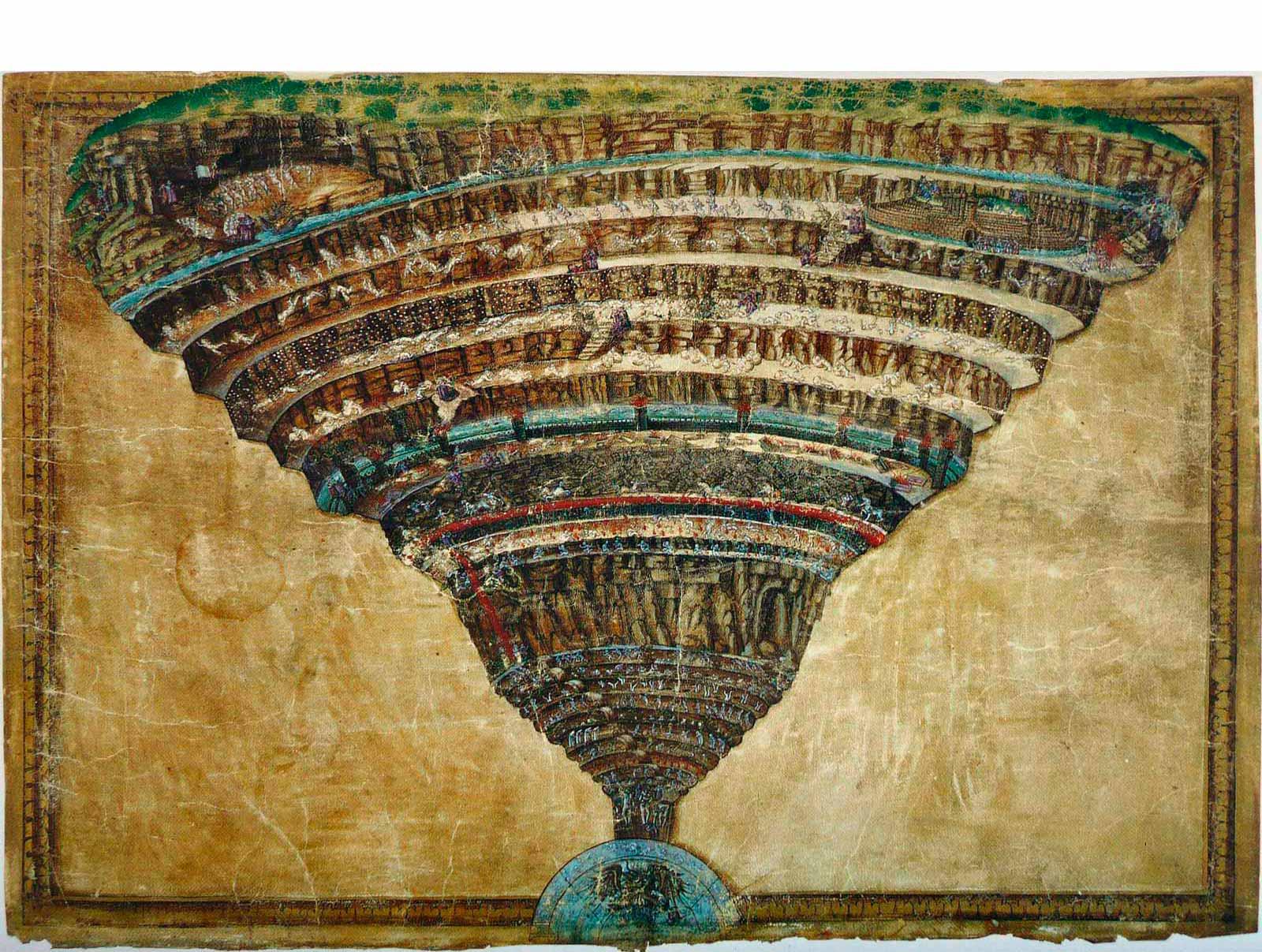 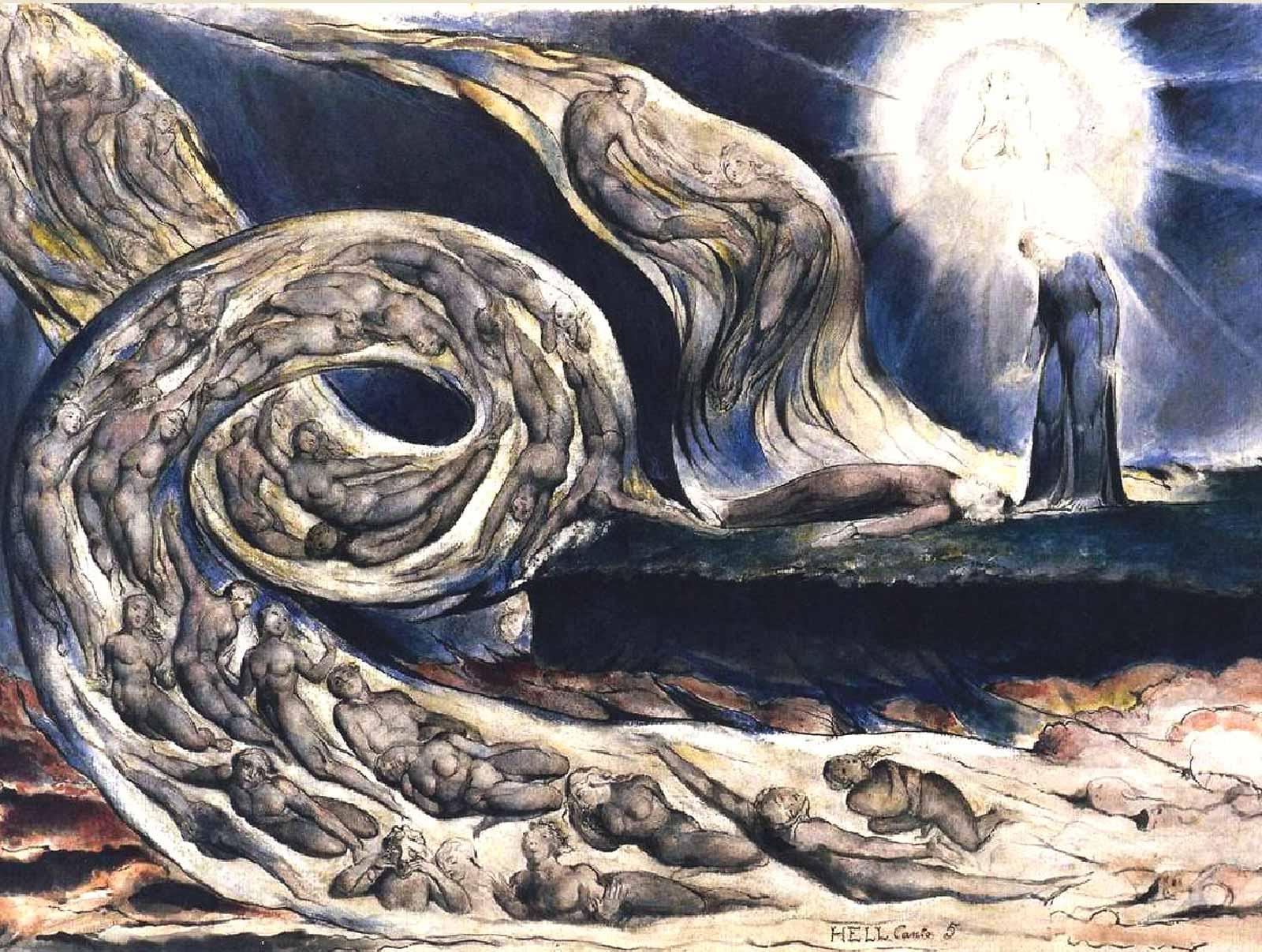 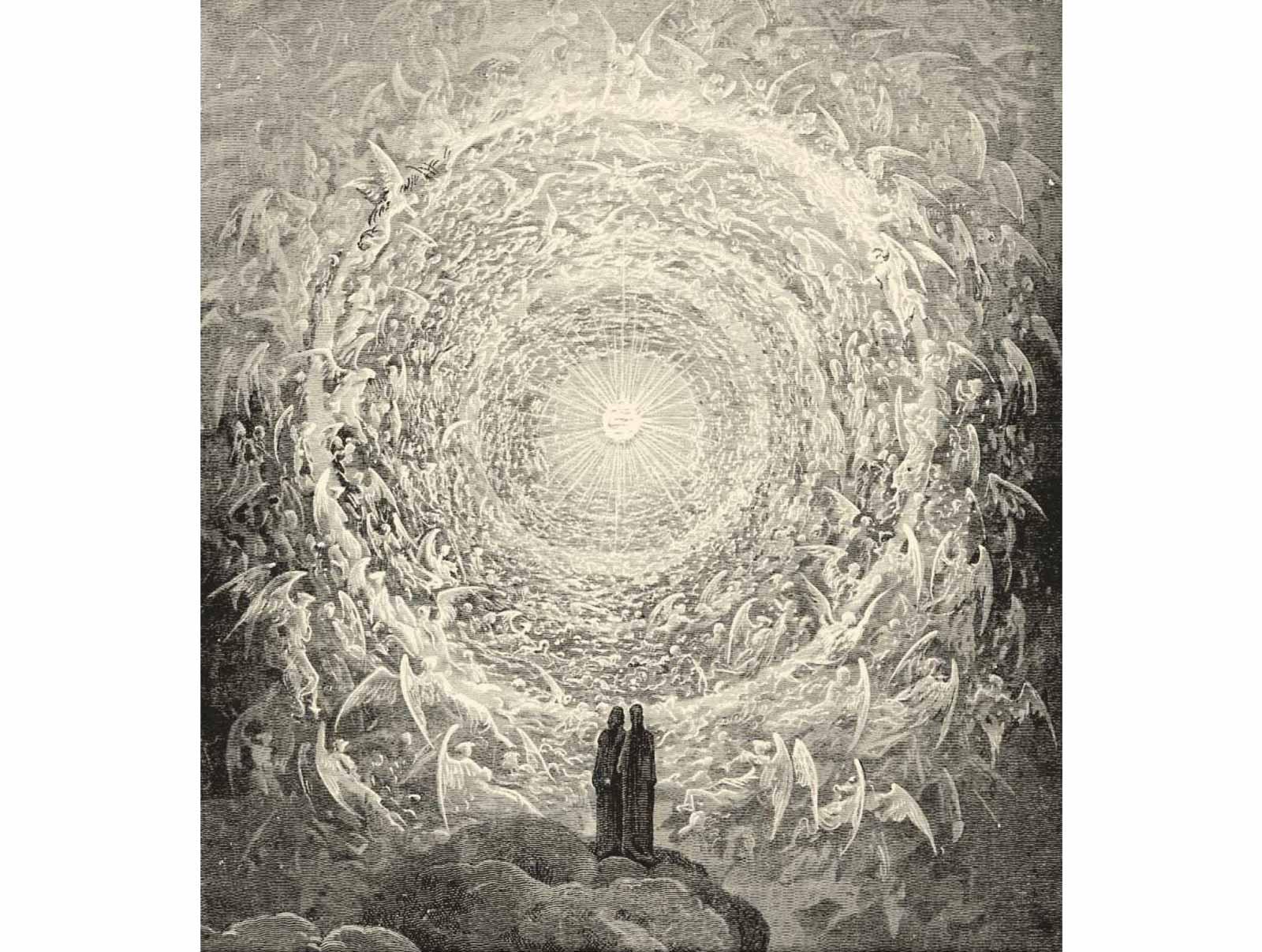 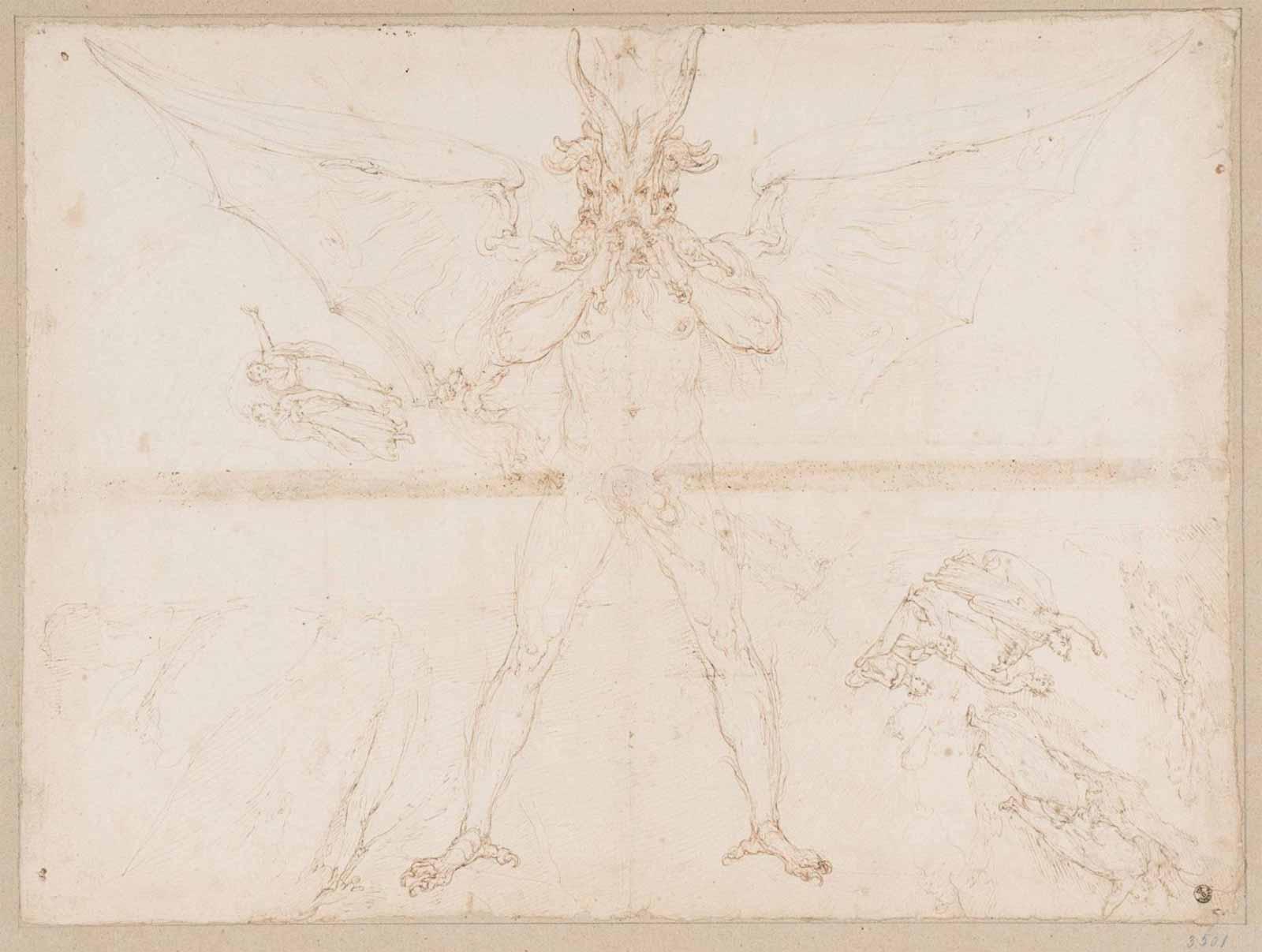 And while not explicitly Dantean, Hieronymus Bosch’s depictions of Hell draw from Dante’s poetry, and the same can be said about Michelangelo’s Final Judgment, where the punishments the damned endure are inspired by the gory and vivid descriptions found in Dante’s Inferno.

Dante’s work saw very little artistic representation in the seventeenth century. The stern Protestant consciousness of Holland, then the great artistic center of Europe, was no fertile ground for visions of heaven, hell, saints, and sinners

The eighteenth century yielded a number of noteworthy Dante-related artworks. In 1757, Antonio Zatta and his collaborators worked on his Venetian edition. The 106 copper-print illustrations that emerged have a graceful refinement reminiscent of the Rococo.

Yet, it's the nineteenth century that saw Dante's work endure robust popularity in the arts, given the fascination the Romantics and, at a later date, the Pre Raphaelites and the Nazarenes had with the Middle Ages and Medieval literature. 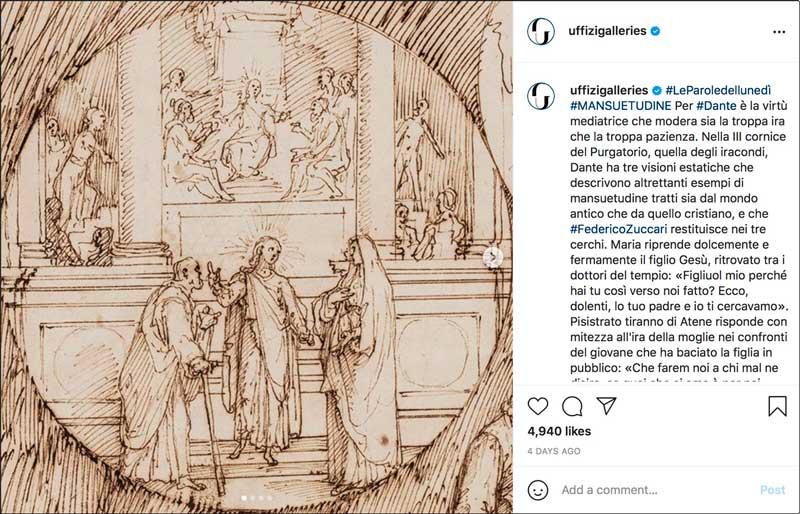 Henry Fuseli did a series of six wash drawings for the Inferno and Purgatorio and several oils. Between 1826 and his untimely death in 1827, William Blake realized 102 unfinished pencil sketches and watercolors that encompass the Inferno, the Purgatorio, and the Paradise. The artist also injected his private vision into the poem to such an extent that Blake’s illustrations are less visual renderings of the text and more a presentation of Blake’s own philosophy filtered through Dante.

Ingres and Delacroix both made Dante-themed work. Ingres painted a frontal composition of Paolo and Francesca, the adulterers that appear in Inferno V. He also featured Dante in a group painting titled The Apotheosis of Homer (1827), which depicts Homer being crowned as he’s flanked by poets, artists, and philosophers both ancient and modern. 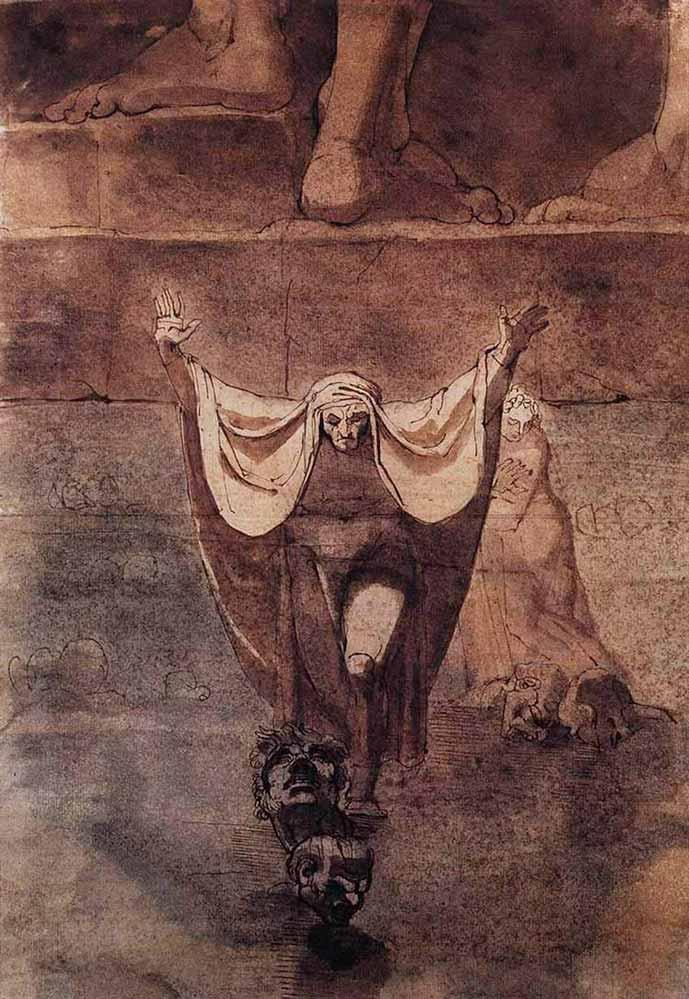 “The general cultural Zeitgeist or world view of wealthy countries of the western world in the present day has probably never been so far from Dante's medieval assumptions and conceptions. And yet we continue to read him.”

Perhaps the nineteenth-century Dante-themed body of work that has had the most enduring popularity is by French illustrator Gustave Doré. In his lifetime, he did watercolors, ink washes, oils, and white gouaches of selected Inferno scenes, yet it’s his series of tonally shaded woodcut engravings that represents the climax of his career from the point of view of technical dexterity and commercial success. With this massive endeavor, Doré sought to bridge the gap between the fine arts and illustration, and while he enjoyed commercial success, it seems he failed to achieve this particular mission.

“Doré’s success is owing to the international diffusion of his work in numerous translations of the Divine Comedy, and his highly lauded “visionary eye,” Professor Deborah Parker says. “Doré’s illustrations have clear contours, dynamically positioned figures, and arresting juxtapositions of dark and light tones.”

In 1950, in preparation of the 700th anniversary of the birth of Dante, the Italian government commissioned Salvador Dalí to illustrate the Divine Comedy. Dalí, executed the whole Commedia in lithographs accompanying the text of the poem, with each section displaying a specific aesthetic: the Inferno is surreal, oneiric, and fantastic; Purgatorio’s aesthetic is existentially expressionistic; and Paradiso is the most traditional in its composition, such that it brings forth a happier, almost religious aesthetic.

Between 1958 and 1960, multidisciplinary artist Robert Rauschenberg created a series of drawings devoted to Dante’s Inferno. He combined his own drawings and watercolors with images transferred with a chemical solvent from glossy magazine reproductions. In his drawings, he placed the Comedy in a contemporary context: JFK and Adlai Stevenson appear in the series. Through symbols and Dante’s clever framework, he exhibited his personal revulsion at modern civilization’s transgressions. 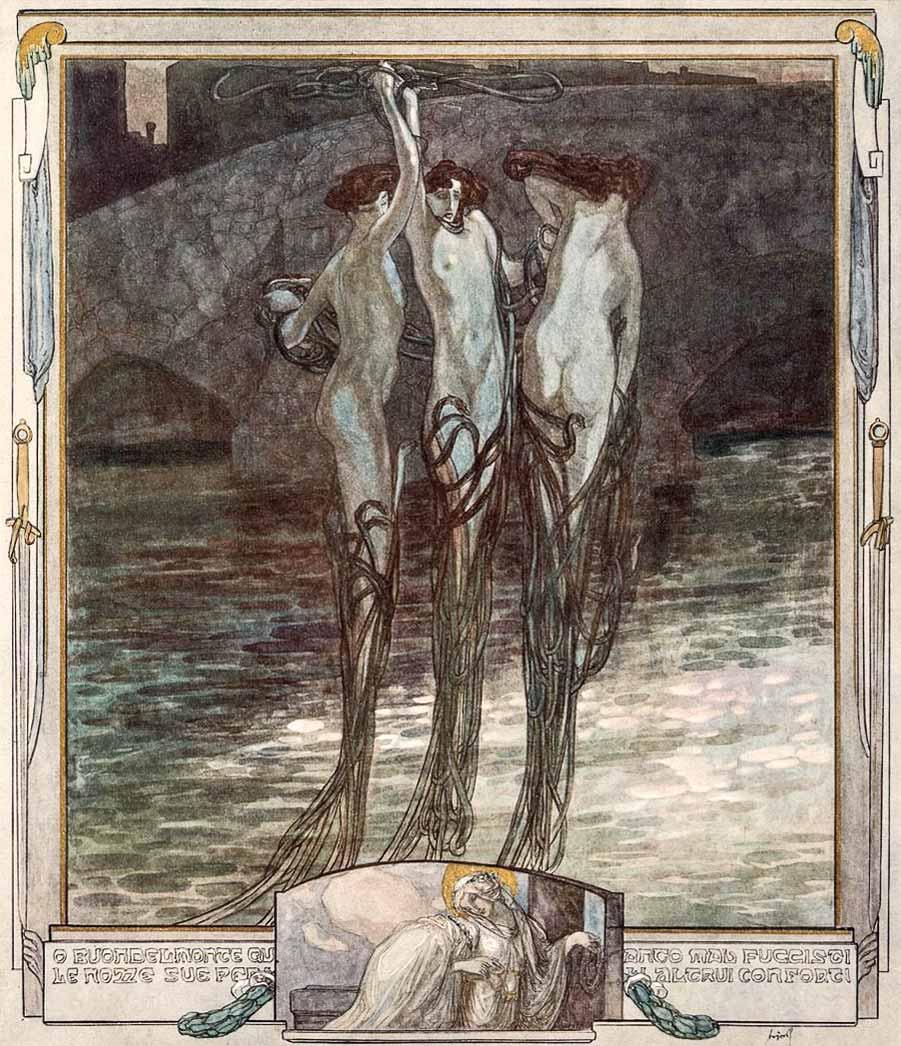 In the 1960s, politician and painter Renato Guttuso presented his drawings (fifty total) often of Marxist inspiration with sardonic wit, vibrant colors, caricatures of his contemporaries, anger, and snippets of the poem's text.

In all, modernists embraced Dante. Some scholarship maintains that his descriptions of the highest spheres of Paradise can be codified as abstract. Italian literary critic Giorgio Petrocchi wrote in his seminal work Vita di Dante: “Dante came to the abstract art of the third canticle, its incorporeal, immaterial luminism, a variegated chromatism that, in Paradise, results in the prevalence of the poetry of the eye and of the sound, fueled by the long search for eternal light.”

As the 700th anniversary of Dante’s death approaches, it’s only natural to wonder how his work enjoyed sustained appeal. “The general cultural Zeitgeist or world view of wealthy countries of the western world in the present day has probably never been so far from Dante's medieval assumptions and conceptions. And yet we continue to read him,” Alison Cornish, Professor of Italian and Chair of Italian Studies at NYU, tells Art & Object. “Dante might be for us as Virgil was for him: a poet who can still guide us, but whom we would consider superseded in his religious beliefs and politics, left behind in Limbo, which is a dim but not too unpleasant place in Hell.”

This is especially true for non-Italian readers of Dante. “It helps that they are untouched by his canonical status: it is not required reading, it is not expected reading, it is not already known to the point of being banal,” Cornish continued. “It seems, rather, quite exotic. Like a contemporary video game, it describes a whole, complete universe, rational in all its parts; it has clear rules and boundaries. Like all good books, what draws readers in and keeps them coming back, is the sense that what they are reading has hit on some sort of truth that touches us all.”